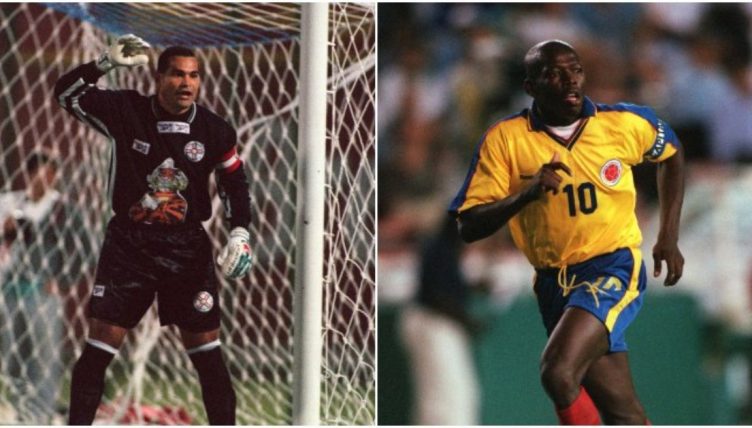 It was a fight for the ages, played out between two players who were, for want of a better word, a bit on the eccentric side.

Faustino Asprilla had been at Newcastle United for just over a year by then, but his reputation as an unpredictable force of nature was already well-established.

A few years earlier, he had missed Parma’s 1993 Cup Winners’ Cup final victory over Royal Antwerp after injuring himself booting through the glass door of a bus that had collided with his car.

More recently, the Colombian striker had been handed a suspended prison sentence after shooting a gun without a permit and was being sued for child support by his estranged wife.

There was never a dull moment in the life of ‘El Tino’, and so it proved on that fateful April night. It was the night Asprilla came to blows with one Jose Luis Chilavert.

The Paraguayan goalkeeper was something of a walking contradiction.

Remembered by many for his brilliantly executed free-kicks and penalties, Chilavert scored an impressive 59 goals throughout his career.

In interviews, he also had the air of a would-be philosopher, using his platform to wax lyrical on the state of the world.

Prior to the 1998 World Cup, he was asked if he ever felt pressure, to which the Paraguayan responded: “Pressure? This is just a football match. When you do not know how to feed your children, that is pressure.”

A few years later, he even refused to take part in the 2004 Copa America in his homeland, arguing the money would be better invested in education rather than football.

That was all well and good, of course, but there was just one problem: on the pitch, Chilavert was a notorious purveyor in the dark arts of sh*thousery.

Indeed, his confrontational antics earned him the nickname ‘The Bulldog’ – a moniker he embraced whole heartedly, even going as far as having a giant picture of a bulldog emblazoned on his shirt.

Like a more volatile version of Peter Schmeichel in his prime, Chilavert combined his first-rate shot-stopping skills with a fiery temper and a mouth like a sailor.

Captain of Paraguay at the time, his leadership and ability between the posts proved crucial in helping the South American nation reach a first World Cup in 12 years.

But Chilavert liked to talk. Which was kind of how this all started, back when the two sides faced off at the El Metro in Barranquilla in the very first game of the qualifying campaign.

Despite their disastrous showing at USA ‘94 and with many players either absent or still reeling from the death of defender Andres Escobar, Colombia went into the game as overwhelming favourites.

Chilavert had other ideas though.

In the build-up, Chilavert made a bet he would score past his opposite number Faryd Mondragon – something he had done at club level when Velez Sarsfield played Independiente.

On top of that, he targeted overweight Colombian striker Ivan Valenciano for abuse, advising the Atletico Junior forward to “eat fewer desserts” and “set an example for the children”.

In truth, it was a different era and few, if any, could deny Valenciano was packing a few extra pounds – his own fans even nicknamed him ‘El Gordito de Oro’ meaning ‘The Golden Fat Man’ – but the remarks irked the Colombia camp.

There was no let-up once the game began either, with Chilavert going full-throttle in an attempt at intimidating his opponents into submission – one early save was even greeted with a clenched fist and a shout of, “Come on, damn it, here I am.” Braveheart eat your…er…heart out.

Another smart save from Valenciano followed, along with more fist pumping and generally manic behaviour. Paraguay went in 0-0 at half-time thanks mainly to Chilavert.

It didn’t last though. Eight minutes into the second half, the languid Asprilla finally made his presence felt, combining with Carlos Valderrama on the edge of the box before unleashing a sublime strike past the helpless Chilavert.

Asprilla celebrated with his trademark forward somersault routine followed by an uncharacteristically angry cry to the watching Colombian fans – this was him venting his frustrations at Chilavert’s antics and disrespect to his team-mate and friend.

In a matter of seconds, Asprilla had done the unthinkable and silenced the Paraguayan. It wouldn’t be forgotten. 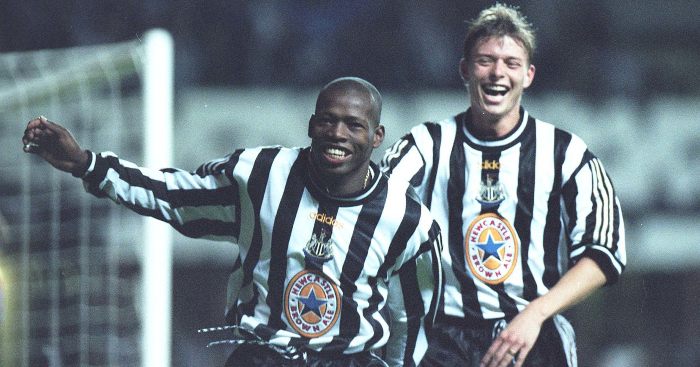 By the time the two teams met again in Paraguay in April ‘97, the hosts knew victory would represent a significant step towards World Cup qualification. Chilavert was going to do everything in his power to ensure it happened. Everything.

He was at his imperious best from the off, batting away a string of Colombian efforts, including a one-on-one with Asprilla and a spectacular save from a Carlos Valderrama shot. He was rewarded for his heroics on the half-hour mark when Paraguay took the lead through a scrappy own-goal scored by Hugo Galeano.

That was how the game stayed until the 80th minute mark, when all hell broke loose. This time it was Asprilla’s turn to lose his cool after a game in which Chilavert had denied him on no fewer than four separate occasions.

Quite what happened is the source of some debate but, as TV pictures show, things kicked off when the Colombia striker attempted to meet a Leonel Alvarez cross from the right in the Paraguay box.

Rather than connect with the ball, Asprilla somehow ended up connecting rather clumsily with Celso Ayala’s knee, sending the defender sprawling to the ground.

While the contact appeared possibly accidental, ‘El Tino’ found himself almost immediately getting up-close-and-personal with the Bulldog himself, Chilavert.

Not one to be intimidated, Asprilla reacted with his signature brand of impulsiveness, striking the Paraguayan across the face.

At some point, either before or after, the Chilavert is alleged to have spat in his face.

Not that referee Wilson Souza cared all too much, with the Brazilian opting to send both players off before awarding Colombia one of the most contentious penalties of all time.

Chilavert told Blu Radio: “Tino had stepped on Celso Ayala’s knee. And I tell him, ‘Why are you stepping on his knee?’ And Tino slaps me and the referee saw it. They expelled us both and charged a penalty against Paraguay. I mean, it’s ridiculous, but hey, he’s Brazilian (the referee).”

Though the shot-stopper would have you believe butter doesn’t melt in his mouth, Asprilla recalls things in a more calculated, simplistic manner: “On the play, Chilavert spat in my face. I cleaned myself up, got up and slapped him. It was there when the referee whistled a penalty for Colombia and sent us both off.”

A man that never hurt anybody

There is little debating what happened next though.

Rather than head off to the changing rooms, as is required in the case of a sending off, Asprilla instead took position on the Colombia bench, in order to get a good view of the resulting spot-kick.

Chilavert didn’t like this. Not one bit. As he headed off for an early bath, Chilavert decided to leave Asprilla with a lasting memory of their time together.

Striking the Colombian across the face, Chilavert lit the fuse for the chaos that followed, with the entire Colombia team swarming on him almost immediately.

Victor Hugo Aristizabal landed the most significant blow with an acrobatic kick worthy of Daniel La Russo in the Karate Kid films.

He later justified the actions, which landed him with a two-game ban, by arguing he couldn’t stand the idea of someone punching Tino – “a man that never hurt anybody”.

Clearly, Aristizabal hadn’t been keeping up with Asprilla’s Premier League antics or the headbutt he’d planted on Keith Curle during a game against Manchester City.

In any case, the game was temporarily halted while the authorities attempted to calm the situation by deploying police in full riot gear. It was chaos. At one point, Colombia goalkeeper Mondragon could be seen pleading with Carlos Valderrama to keep the peace.

After 10 minutes of anger and confusion, the game returned to a normal enough state so that Mauricio Serna could take and score the penalty for Colombia.

Yet, like some demented fusion of Sir Alex Ferguson and Tyler Durden from Fight Club, Chilavert’s antics ended up having the desired effect.

Colombia’s players were clearly affected by what they had seen and soon let their concentration slip, with Derlis Soto bagging a late winner for Paraguay.

‘If I catch you outside, I’ll kill you’

Hefty fines and bans were handed out – Asprilla got a two-game suspension while Chilavert missed four. There was a happy ending, at least, with both teams eventually reaching the 1998 World Cup.

Reflecting on the incident more recently, Chilavert appears to have learned precisely nothing from the whole encounter.

“I remember that the 40,000 people in the stadium began to insult Asprilla. When we were leaving the field I hit him and said clearly, ‘If I catch you outside, I’ll kill you.’

He takes little responsibility either.

“It was a scandal motivated by Asprilla alone. My friend Valderrama always says that he never saw me as out of control as that day. The next day, for all the South American press, the bad guy in the movie had been, as always, Jose Luis Chilavert.”

Whether the Chilavert was the main culprit or not, his antics would eventually catch up with him.

A few years later, a similar incident with Roberto Carlos saw Chilavert hit with another ban after spitting in the Brazilian’s face during a post-match interview. The ban saw him miss Paraguay’s first two games at the 2002 World Cup.

Even so, Chilavert’s behaviour could have been far costlier.

Years later, Asprilla revealed in a documentary broadcast on Colombian television that a hitman contacted him after the fight with Chilavert, offering to kill the Paraguay goalkeeper.

In a sinister turn of events, the gunman called his hotel room after the game in Asuncion, asking for permission to take him out. Asprilla refused.

“What? Are you crazy?” Asprilla recalled of his response. “You’ll destroy Colombian football, you can’t do that. No, no, no, no. What happens on the pitch stays on the pitch.”

The gunman later died in a drug-related shooting in 2004. He didn’t know it at the time, but Chilavert literally dodged a bullet that day.

Even now the pair are not on the best of terms – Chilavert exited one radio interview after Asprilla joined the call – but their coming together remains one for the ages.

A crazy time capsule of everything that was good, bad and ugly about South American football in the 1990s.