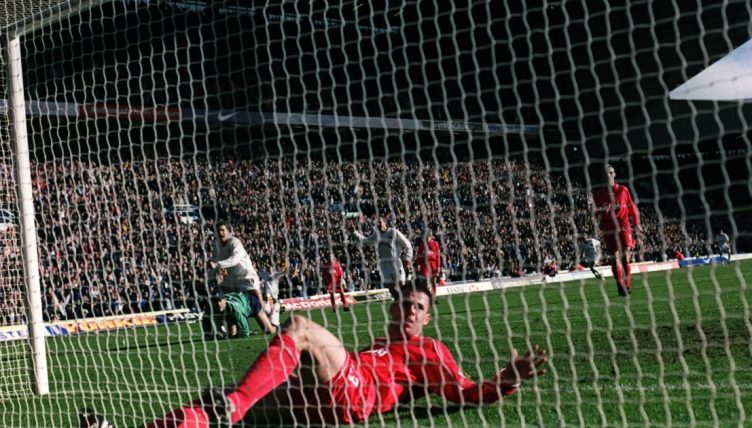 When Mark Viduka arrived at Elland Road in the summer of 2000, David O’Leary’s Leeds United were – in the words of chairman Peter Ridsdale – living the dream.

The night before the morning after, Viduka’s early months in the white of Leeds are like a delirious fever dream, those first few pints on a Saturday evening before things suddenly and sharply turn south.

Having gone into the new millennium at the top of the league, Leeds ended up finishing third, securing Champions League football for the first and only time since they were champions in 1992.

Funds bolstered by the promise of top-level European football, in came Viduka alongside Olivier Dacourt and Dominic Matteo – all of whom would play a pivotal role in the run to the semi-final that unforgettable 2000-01 season.

Their new No.9 had scored 35 goals in 48 appearances during his 18 months at Celtic and looked to be the kind of signing to push Leeds on to the new heights Ridsdale dreamt of.

It took Viduka until the seventh week of the season to open his account for Leeds, when he and strike partner Alan Smith scored two apiece in a madcap 12-minute flurry in a 4-3 victory over Spurs, but he never looked back.

From that point onwards, the Australian was flying. Come the visit of Liverpool in early November, he’d scored five goals in his last four Premier League appearances.

Gerard Houllier’s Reds famously went on to win all three cup competitions they contested that season, and would eventually pip Leeds to third place – and with it Champions League qualification – by just a point come the final day.

The previous week they’d won the Merseyside derby 3-1 at Anfield, their third successive league win, and they looked like making it four when Sami Hyypia and Christian Ziege put them two goals ahead within 18 minutes at Elland Road.

Yet six minutes after doubling Liverpool’s lead, Ziege lost his head while being chased down by Smith – Marcelo Bielsa would have loved him, eh? – who managed to nick an interception, with enough contact to send it off course.

It came to an unmarked Viduka, who knew his luck was going to be in that afternoon, and rubbed salt into Ziege’s wounds with a brazen and delicate chip over Sander Westerveld, raising his hands to the sky and wheeling away before the ball had even floated into the side netting.

Leeds were back in the game, but Liverpool weathered the palpable bounce that Viduka’s gift of a first goal had given them, and kept their nerve to keep their lead until half-time.

They didn’t need long after the break to get back on level terms, though.

Leeds were anything but imperious in defence at this point, especially after star man Jonathan Woodgate was forced off through injury in the opening stages, with Rio Ferdinand not due to arrive in a club-record transfer until later that month.

Woodgate was replaced by Danny Hay in the 16th minute, one of just four Premier League appearances the New Zealand international would make for the Whites. Liverpool didn’t exploit the makeshift backline to the extent they might have, but they found it easy to carve open a gap and regain their lead just after the hour.

So Viduka had it all to do again. No worries, as they’d say in Melbourne.

While it was Smith and Kelly that proved instrumental in the first two, it was Dacourt that had a chance to demonstrate his quality for Viduka’s hat-trick leveller, spotting the No.9 holding his run inside and threading it through to find him.

The striker didn’t get a chance to get his shot away first time, left needing to turn after Berger and Markus Babbel came back to cover. Given his frame, the pirouette looked anything but balletic, but it certainly wasn’t clumsy – his touches were perfectly deft, leaving Berger on his arse and Babbel out of the equation as his shot also evaded Westerveld and a young Jamie Carragher, covering on the line.

Two minutes later and it was a similar story. Viduka held his run to stay onside (albeit VAR may have had something to say about that), a ball in from Dacourt, a red-faced Carragher left helpless in the back of his own net.

But this goal had a different flavour and was arguably the best of the lot. Dacourt’s low, driven ball had enough power behind it whereby it easily could have ricocheted off Viduka’s boot and out for a corner, but his first touch was perfect – it completely took the sting away, leaving him with time and space to finish.

He didn’t overthink it, emulating his first strike by dinking it over the onrushing Westerveld and just over the sprawling body of Carragher.

“I don’t think I had an exceptionally good game,” a sweat-drenched Viduka told Sky Sports in his post-match interview that day.

Not only that, but he reiterated the somewhat baffling sentiment later down the line.

“I don’t like it when people suggest that was my career highlight, simply because it was not,” Viduka reminisced in an interview with The World Game.

“How do you define ‘highlight’, anyway? Winning my first league title with Melbourne Knights was a highlight and playing in a Champions League semi-final with Leeds was huge too.

“Okay, I scored four that day but I don’t think it was the greatest game I ever played, to be honest. I played better games.

“For me, my best game was when we beat Lazio 1-0 in Rome in the Champions League and I set up Alan Smith with a back-heel. I felt confident, I was taking on players and I was dangerous all night.”

Don’t worry, Dukes – that Lazio performance doesn’t go underappreciated round here. And we get it, it must’ve been annoying for The Walkmen when they got heckled to play ‘The Rat’ after carefully crafting an immense and under-rated back catalogue.

Yes, ‘The Rat’ is obvious. From the second the drums kick in it’s like a punch in the chest. There’s no subtlety there. But frankly, that’s why it’s a stone-cold classic. People love it for good reason – just like Viduka’s four goals against Liverpool.