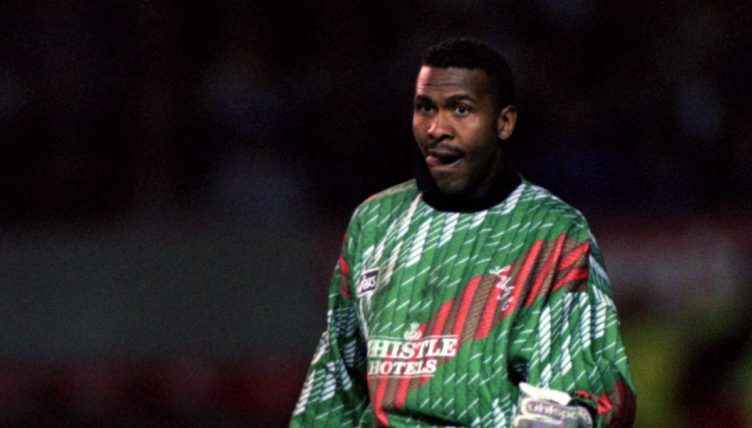 During his 11 years at Elland Road, Lucas Radebe established himself as one of Leeds United’s greatest heroes.

Radebe, affectionately known as The Chief in West Yorkshire, has enjoyed not just a remarkable career but an extraordinary life.

Shot in his youth in Soweto, Radebe went on to captain Kaizer Chiefs, Leeds and South Africa, with Nelson Mandela naming the defender his “hero”.

There are many reasons he became so loved in Leeds, including one memorable day against fierce rivals Manchester United in April 1996.

An outfielder playing in goal is always a fun novelty, but with Radebe it was not entirely unexpected. While he eventually made his name as a centre-back, he had in fact started his career in South Africa as a goalkeeper.

Only a month prior to donning the gloves at Old Trafford, Radebe was forced to switch from centre-back to goalkeeper at half-time after John Lukic had suffered a concussion, keeping a second-half clean sheet against a Middlesbrough side that had scored the game’s only goal thanks to a fourth-minute penalty.

The Whites were enduring a terrible second half to the season and arrived at Old Trafford on a run of six defeats in seven games.

Lukic had been dropped from the matchday squad entirely, with Mark Beeney taking his place in goal and no back-up on the bench. What could possibly go wrong?

Perhaps the accompaniment of #UPBEATMUSIC has disorientated Beeney, but Leeds’ stand-in ‘keeper is definitely confused as Manchester United launch a ball over the top of the defence.

Unsure whether to use his head or his hands, he decides to use both. Carlton Palmer is trying to argue with the referee that it shouldn’t be a red card but not for the first time fails in his application.

Beeney departs, wearing a shirt that looks like it’s made from your grandma’s curtains, and Radebe enters, for some unknown reason wearing a wonderfully wavy goalkeeper’s top instead. That’s more like it.

Like all outfielders when they find themselves in goal, Radebe suddenly looks tiny when stood between the posts, but if there’s one thing in his favour, it’s that he is 100% dedicated to the cause.

As half a chance falls to the feet of Cole, Leeds’ new hero bravely dives at the striker’s boots to secure the ball.

The look on Radebe’s face afterwards suggests he’s still coming to terms with the fact he’s going to have to play 72 minutes as a goalkeeper at Old Trafford. 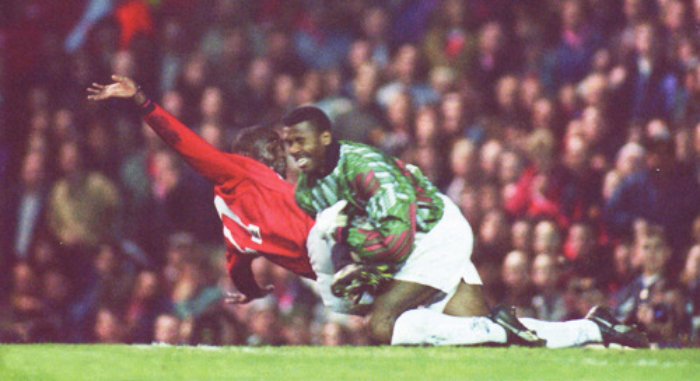 Brian McClair is bearing down on goal as Leeds’ defence struggle to protect their auxiliary goalkeeper. The Scotland international fires the ball low and hard at the near post, but Radebe springs to his left to get down with two hands and push it away to safety.

McClair, who scored over 250 goals in his career, looks exasperated. Radebe can’t help but grin.

Chances are starting to fall to the hosts, and Cole in particular, with Leeds unable to stop the Red Devils’ attack getting in behind their defence.

Cole snatches a left-footed shot towards goal, and Radebe has a slight fumble but is yet again more than happy to put his head where it hurts as Ryan Giggs gets a sniff of a chance.

The old muscle memory of playing in goal is now returning to the South African, who glances behind either shoulder while on the deck like a seasoned pro.

Leeds have made it through to half-time and Radebe is on for his second clean sheet in as many months.

The clock continues to tick in the second half, the tension rises with every second, and the Old Trafford crowd are getting increasingly frustrated. They can’t, surely? Can they?

Anyone even slightly familiar with the history of Leeds United will know the answer to that question: no, they can’t.

The ball is pinballing around the edge of Leeds’ box when it eventually falls to Roy Keane, who evades a sheepish challenge to rifle the ball home.

The tragedy is that Radebe actually gets a hand to it and stays crumpled on the floor in despair. Definitive proof that life. is. not. fair.

Later in his career, Radebe rejected an approach from Manchester United, cementing his place in Leeds folklore by telling SuperSport in 2015: “I wouldn’t wear red. Only the white rose, not the red rose.”

After the match, however, there were more pressing matters. A frustrated Alex Ferguson said: “I can’t understand Leeds United.

“Their manager doesn’t deserve to have his players playing like that only when they come to Manchester United. No wonder managers get the sack.

“He has done a great job for that club, it’s pathetic the way his team have been playing. If they had played every week like they did tonight it would be a different story. I think we can accept any club coming here and trying their hardest – so long as they do it every week.”

And it was that outburst which led to most famous rant in Premier League history, as Kevin Keegan took umbrage to Fergie potentially motivating the Leeds players ahead of their next fixture, against Manchester United’s title rivals Newcastle.

The Magpies, in fact, went on to beat Leeds 1-0, but that didn’t stop Keegan from producing one of the most ‘head’s gone’ moments in football history.

There are plenty of reasons to be thankful for Lucas Radebe. His ability to keep his head while those around him lost theirs is certainly one of them.