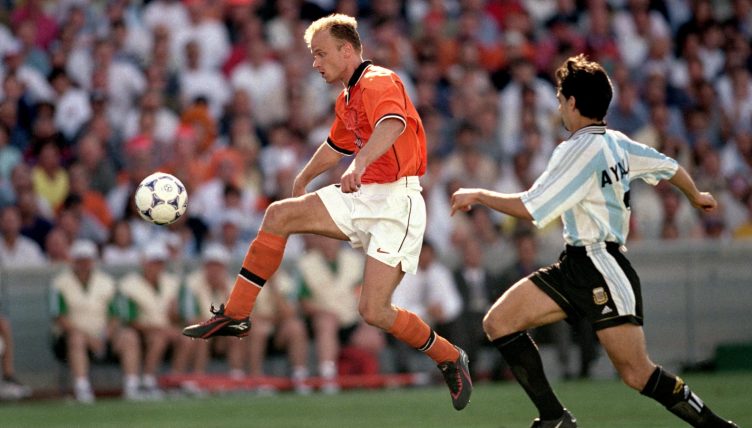 We may have been spoiled by a number of sensational goals at the World Cup in Qatar, but a player will have to pull off something truly remarkable to match Dennis Bergkamp’s effort at France 98 and Lionel Messi’s against Nigeria at Russia 2018.

When Lionel Messi danced past Kenneth Omeruo and fired across Francis Uzoho to give Argentina the lead against Nigeria, it was lauded as not just the best goal of the 2018 World Cup, but one of the best World Cup goals ever.

There’s no doubt it was special – when such an accomplished finish is the worst part of a goal, you’re going to sit up and take notice – but best ever? Come on.

So, in tribute to a mystery which made great use of split screens but was generally a bit of a mess, I’ve decided to play Bergkamp’s and Messi’s goals side-by-side to break them down further and determine, once and for all, who did it better

0:00 The 10 men of the Netherlands and the 10 men of Argentina are seconds away from full-time in Marseille. The South American side might be a little more tired, having needed extra-time and penalties to see off England in the previous round, while Edgar Davids’ stoppage-time strike meant the Dutch didn’t need the same against Yugoslavia.

0:00 We’re 13 minutes in at the Krestovsky Stadium. Argentina know they will be eliminated early if they don’t win, while a draw might be enough for Nigeria, who have half an eye on Iceland’s game with Croatia at the Rostov Arena.

0:01-0:06 Frank De Boer has a leisurely little jog upfield, with all the intensity of a man attempting to conserve his energy for the impending 30 minutes of extra-time.

There’s no pressure, and no need to do anything with the ball, but his faculties are surely drained by 90 minutes of dealing with Gabriel Batistuta, Claudio López and Ariel Ortega. Well, at least until Ortega decided to go for a proto-Zidane headbutt to Edwin van der Sar’s chin. 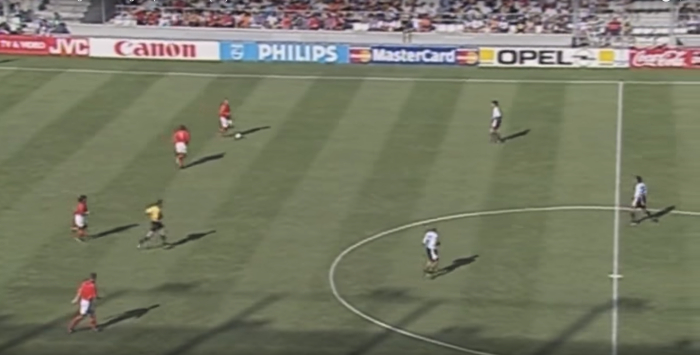 0:01-0:06 Marcos Rojo looks at the space ahead of him, before ambling back with the intensity of a man who just got nightmares about his sideways rabona from the last World Cup, and taps the ball back to Ever Banega. Rojo, as football’s closest analogue to Santa’s Little Helper, is both never tired and rarely focused. 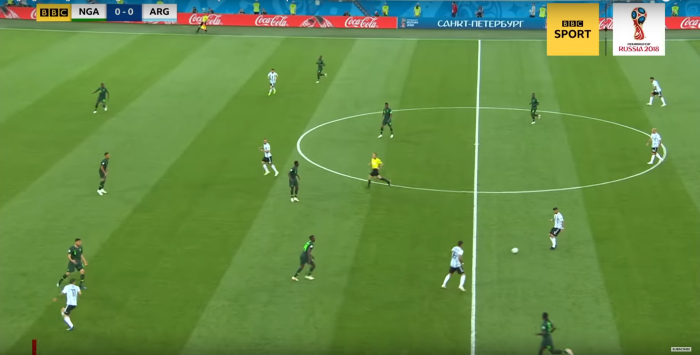 0:07-0:09 De Boer takes out his five-iron, lofting the ball 60 yards downfield with unerring accuracy. It couldn’t be more perfect if he’d called a taxi for the ball and had it dropped off on Dennis Bergkamp’s big toe.

Bergkamp instinctively knows when to peel off the last man, like a contender on Gladiators hearing a silent John Anderson whistle.

0:07-0:09 Ever Banega’s ball forward has the trajectory of a stone skimmed off the sea, but it is no less effective. Rather than floating the ball over the covering defender, he adds enough cut for it to race alongside Kenneth Omeruo like a Formula 1 driver despatching back-markers.

If anything it’s emblematic of Banega’s own game of catch-up, having played just 36 minutes in the first two games and leaving himself just 90 minutes to salvage both his and Argentina’s tournament.

0:10 Bergkamp kills the pass and sticks his game on pause while letting the defenders carry on as if nothing has changed.

Anticipation and reading of the game is a huge part of defending and, to be fair to Roberto Ayala, he’s perfectly anticipated the direction 99% of players would take from that position. It’s hardly his fault Bergkamp’s in the other 1%. 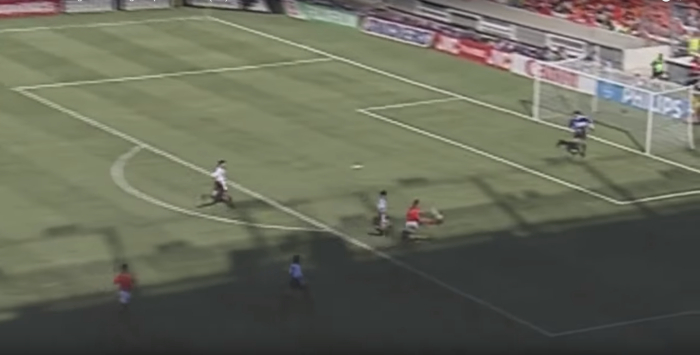 0:10 Messi sticks Omeruo on pause to gain a valuable second, trapping the ball at full pace with his thigh – something which the laws of football and science suggest should not be possible.

Is Omeruo regretting pushing up a split-second before Banega released the ball? Perhaps. Would he normally get away with it? You bet. 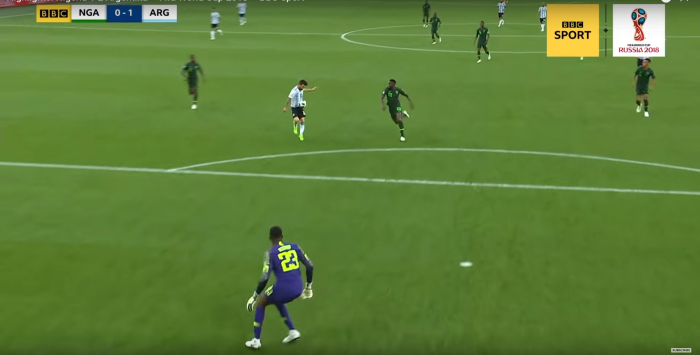 0:11 Ayala and Bergkamp both turn their heads the same way: one to execute, the other to watch.

Jose Chamot and Mauricio Pineda both begin to stare too: they’re no longer defenders; they’ve become audience members watching an end-of-tournament montage entry as it unfolds. They have front-row seats to their own deaths, and they’re not going to waste the view. 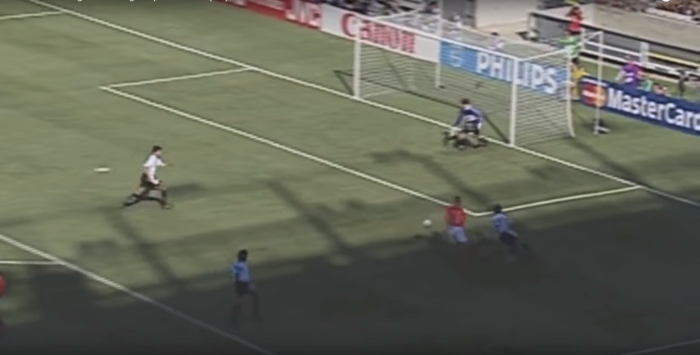 0:11 Messi traps the ball for a second time. If you’re preparing to argue you can’t trap a trap, or that the first touch can’t have been that great if he needed to trap it again, you’re not allowed to watch any more World Cup games this year.

Sorry, I don’t make the rules. 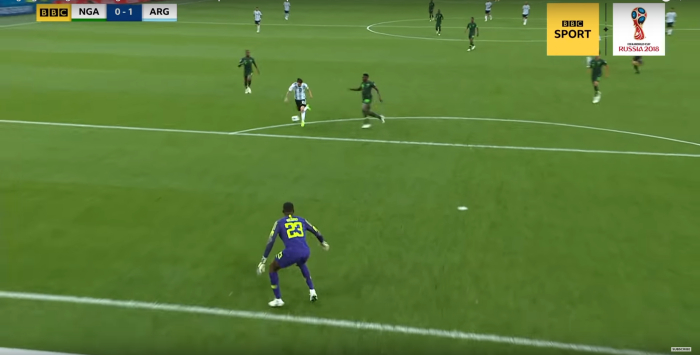 If you look closely you can see a miniature white flag between his fingertips. If you try even harder, you can hear it waving in the wind created as Bergkamp’s outside-of-the-boot shot brushes past. He has created his opponents’ surrender. 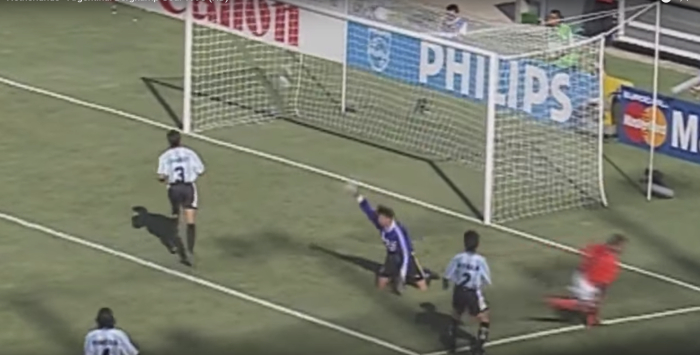 0:12 Uzoho readies himself for what’s coming. He gets his feet right and moves his arms in part-panic, part-balancing act. The near post is covered, the far will require Messi to use his weaker foot.

Messi’s weaker foot is equivalent to most players’ stronger one, sure, but you need to take the small potential victories that come your way.

He hasn’t given up yet, but we’ll put that down to the naiveté of youth.

Another frame passes. Now he has given up.

Messi produced something phenomenal, no doubt, and ran Benjamin Pavard close for Goal of the Tournament honours.

However, comparing his goal with Bergkamp’s misses the fact that the Dutch forward’s effort exists in an entirely different realm.

While Messi is the conductor of his own symphony – perfectly, we may add – Bergkamp has control not just of himself, but also of the obstacles which might otherwise block his path.

When it comes to World Cup moments of quality, it may never be topped.

READ NEXT: A tribute to Dennis Bergkamp, Arsenal legend and ultimate football genius

TRY A QUIZ: Can you name every team Dennis Bergkamp scored against in the Prem?