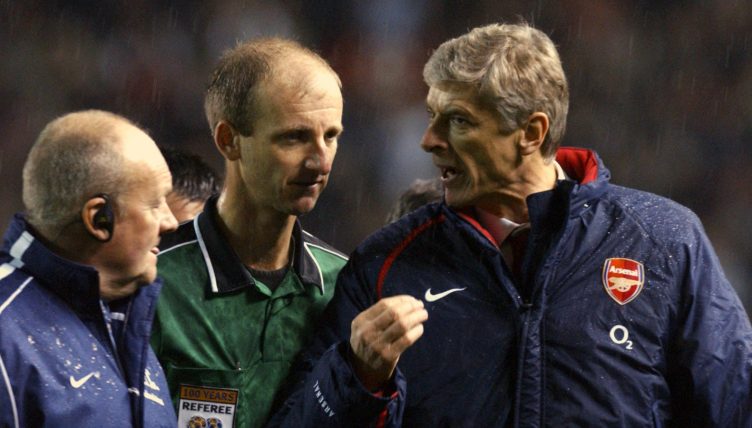 Arsenal fans will forever remember their club’s iconic 49-game unbeaten run in the Premier League – but they will also never forget the way it was brought to an end at Manchester United.

The run began with 6-1 and 4-0 wins at the end of 2002-03 and was followed, of course, by that remarkable 2003-04 season in which Arsene Wenger’s side created history by becoming the first and to date only club to go an entire Premier League campaign unbeaten.

What is often forgotten, however, is that Arsenal then won eight and drew one of their first name games of the 2004-05 season before heading to Old Trafford looking to bring up a half-century of games without defeat.

And speaking on our 2000s football podcast, The Broken Metatarsal, presenter and Arsenal fan Alex Brooker was still fuming about the way the run ended that day.

“I still maintain that the start of 04-05 is still up there with some of the best football I’ve ever seen Arsenal play. We still looked bang on it, but we got a couple of injuries and then we went to United.

“All good things must come to an end, I get that. But that United game, I wouldn’t have minded getting beat by the better team. But that game, it’s one of the worst refereeing performances you will ever see.

“They targeted Reyes from the start; there were a couple of industrial fouls on him. You couldn’t do it now, but we’re not talking about the 70s, they were still red cards. Ferdinand did a professional foul when Ljungberg was clean through and he didn’t even get booked.”

If you think Alex is simply ranting, here are the key moments from that game for you to make your own minds up.

Wayne Rooney celebrates his 19th birthday by giving his England team-mate Ashley Cole a kick and gets a talking to from Mike Riley, although he doesn’t appear to know what the problem is. No booking.

Given this is the first of many times Jose Antonio Reyes is left nursing a kick to the ankles, can we just take a moment to appreciate those white and gold Total 90s? No booking.

“Get the fuck up.” No red card. No booking. No free-kick.

Patrick Vieira starts to lose his rag with Riley. Gary Neville scythes down Reyes then tells to Sol Campbell to “fuck off”. No booking.

Vieira and Sol Campbell’s exasperations continue as Ruud van Nistelrooy rakes his studs into the knee of Ashley Cole, who’s left crumpled in a heap on the floor as a result. No booking.

Both Nevilles have Reyes in their sights, but we’re not too sure about this one. A trip? A dive? Either way: no booking.

Finally, someone goes into the book. Except it’s an Arsenal player. It’s Cole’s first foul, although he did boot Rooney twice in one tackle to be fair.

The Nevilles are at it again, accusing Reyes of diving after Gary steamed in on the Arsenal winger. Gary gives it a “fuck off” after finally going in the book, presumably because he can’t kick the Spaniard at will now.

So Rooney gives Reyes a kick instead. No free-kick. No booking.

It’s at this point we start questioning why Vieira, Campbell and Dennis Bergkamp are letting Reyes get bullied by Phil f*cking Neville. Sort him out lads FFS. A booking, mind.

Rooney has done Campbell like a kipper, here, but he’s also dived. Van Nistelrooy converts – a year on from that miss and Martin Keown – and Rooney adds a second late on. Arsenal fall one short of the half-century.

READ NEXT: Witness to History: Graham Stack on being the Arsenal Invincibles’ No.2