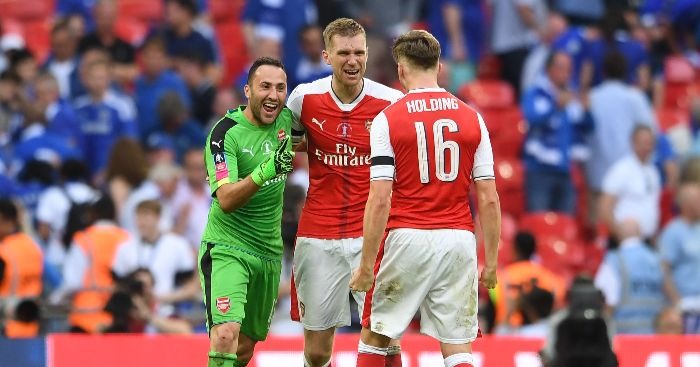 When Arsenal faced Chelsea in the 2017 FA Cup final, they quite simply weren’t meant to win.

Chelsea had just dominated the Premier League after rediscovering their verve under Antonio Conte, while Arsenal had finished outside of the top four for the first time in over 20 years.

But a thrilling final ended with the Gunners as 2-1 victors. Alexis Sanchez and Aaron Ramsey may have grabbed the goals, but the afternoon belonged to one man: Per Mertesacker.

Alan Shearer is concerned. Just look at him; just look at how his head tics forward as he grimaces to emphasise how it really is a “huge, huge ask for Mertesacker”.

Big Per hasn’t started a game of first-team football for 392 days. His campaign was ruined before it even began, decimated by a serious knee injury suffered in a pre-season friendly against Lens.

Even since he returned to the fitness, Arsene Wenger has preferred Laurent Koscielny, Shkodran Mustafi and Gabriel Paulista. Just two weeks ago Mertesacker was even allowed to go on holiday.

But Mustafi and Gabriel are now injured, and Koscielny is suspended after being sent off in the final league match of the season, when Mertesacker was handed his only 37 minutes of the season.

To make matters worse, the 32-year-old is about to make his first start in over a year against serial Arsenal tormentor Diego Costa, who will have the most dangerous attacker in the country, Eden Hazard, in support.

Not to worry you here, Per, but you’re also going to have to line up in a back three for the first time in your career. Oh, and before we forget, you’ll have all nine-Premier-League-appearances-and-one-relegation-from-the-Championship-with-Bolton of a 21-year-old Rob Holding to your right, playing in his first major final.

At least at left centre-back you’ll have the experience of Nacho Monreal. Sure, he’s a left-back… but still. Just try not to look beyond him, because, yes, that is Alex Oxlade-Chamberlain at left wing-back.

The ball is up in the air, and this is the moment Costa – snarling, scheming Costa – can start his magnificent shithousery.

Yet Mertesacker just has to give the striker a slight nudge and it’s an easy header to get him underway and settle any nerves. That was all too simple.

Lethargy meets authority, and the Arsenal fans can feel a pang of relief reverberate around their chests.

Within five minutes Arsenal have taken a surprise lead and not long afterwards Danny Welbeck almost makes it 2-0, only to see his effort cleared off the line.

But Chelsea are finally starting to awake from their slumber and the Gunners’ defence have a brief moment of panic as Costa is played in on goal.

Mertesacker, however, has read it to perfection and is alert to slide in and clear the ball away from danger.

There’s a danger of this article descending into gif after gif of Mertesacker making tackles, blocks, headers and clearances look easy, because time after time, he’s there and he’s doing the dirty work with a grace which belies his awkward, gangly frame.

But what’s notable as the game wears on is just how comfortable and composed the World Cup winner is on the ball. No player from either side who starts the game will finish with a better pass completion rate than Mertesacker’s 93 per cent.

Not once is he dispossessed. Not once does a sloppy touch gift the opposition the ball.

It’s worth repeating that this is a player who has not started a game of professional football for over a year, and here he is in a cup final against the champions of England looking more serene than ever before.

“I went into the game saying to myself, ‘There is nothing to expect from myself, everyone has written me off already,’” he would later reflect. “And I went through my normal routine. Fifteen years and how can I forget?”

In the build up to the game, Mertesacker and Holding interviewed each other for Arsenal’s YouTube channel, during which the youngster asks only half jokingly: “If we play together, are you going to look after me?”

As it transpires, Holding doesn’t need looking after; he is thriving in the battle with Costa, relishing the chance to give the striker a taste of his own medicine.

But on the few occasions his youthful exuberance does get the better of him and he goes chasing after the ball, Mertesacker is right there behind him to sniff out any danger – just like he said he would be.

Holding isn’t the only one enjoying the chance to face Costa. So often the Spain international loved the opportunity to bully the north Londoners, but today he seems to be facing a different team.

The young buck at the back is more than happy to rut with Costa, but that is in stark contrast to the steely resilience of Mertesacker.

Yet again his ability to read the game sees him get to a cross before his opposite number can get a sight of goal.

It’s a tangle of arms and legs and bodies but the end result is a goal kick. The look on Costa’s face says it all.

The second half becomes an increasingly frenzied affair.

Parity is restored for all of three minutes before Aaron Ramsey heads home from Olivier Giroud’s cross and now Chelsea are getting desperate.

In an era when football is obsessed with explosive pace and power, it’s reassuring to see a player whose body is beginning to fail him defying all odds thanks to his brain remaining as sharp as ever.

Fifteen years and how can he forget?

Arsenal manage to see the game out and in truth could have won by more as Mesut Ozil hits the post late on following a myriad of chances in the first half.

But while their attack constantly troubled Chelsea, the victory was built upon the platform laid by a gigantic performance from their forgotten man.

After the match Martin Keown, a man who also won three FA Cups with Arsenal, remarks: “They should name this after Per Mertesacker. This should be called The Mertesacker Final, because I can’t believe the performance he put in.”

Keown repeats this sentiment as the two men embrace, but Per is as cool as he was on the pitch.