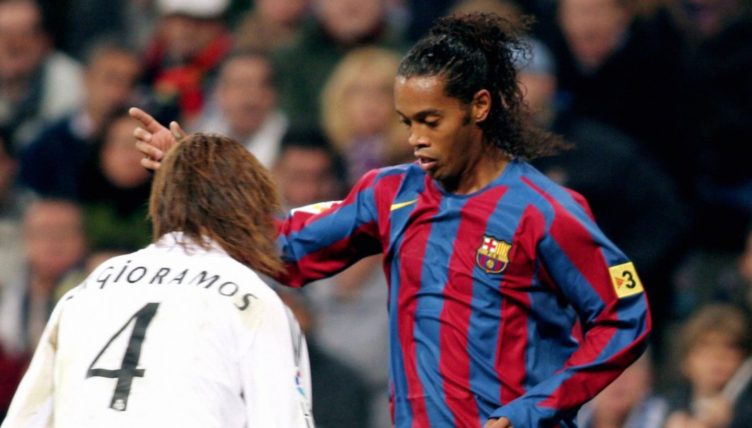 In the week the Brazil superstar added the European Football of the Year award to his World Player of the Year crown, he dominated El Clasico with a display that encapsulated the joy of Barcelona and the folly of the Galacticos.

Samuel Eto’o returned to haunt his former club with the opening goal and, as The Independent noted, there was ‘a spine-tingling exhibition of talent from the world’s most exciting youngster, Lionel Messi’.

But only one performance from that night gets spoken about to this day – and it’s one which even the Real Madrid fans couldn’t help but stand and applaud.

So, without further ado, let’s remember that wonderful display step by step…

In scenes similar to Ronaldo’s giddiness with Zinedine Zidane ahead of the 2006 World Cup quarter-final, the two Brazilians share a relaxed laugh and a joke.

In my mind, they’re almost definitely talking about hazy nights out and distant, drunken escapades – like that time when Roberto Carlos went and…actually, never mind.

As the world awaits a clash between two of the biggest clubs and fiercest rivals on the planet, it’s as if The Two Ronnies are just messing about in a playground.

Being perfect is boring. The most exhilarating players – Maradona, Cantona, Gazza – were immaculate neither personally nor professionally.

Ronaldinho was no different, so it’s only fitting he reminded the Madridistas he’s human before becoming a footballing god.

November 19, 2005 must have been one of the longest nights of Michael Salgado’s life.

It soon becomes apparent that Ronaldinho is operating at a different level to every other player on the pitch, and the Spain right-back has pulled out the short straw in having to try, somehow, to mark him.

Countless times in the first 45 minutes Ronaldinho leaves him helpless and completely baffled. Just imagine being Salgado at this point, utterly stranded and left without protection from his listless team-mates, while the opposition relentlessly take advantage of his misery.

The most resistance he offers is a sly knee, but it’s an ultimately futile attempt at trying to assert himself. It’s not so much a game of cat and mouse but rather a leopard toying with a disturbed hamster.

It’s at this point we realise we’re in the presence of something special.

Yes, he’s already started to give Michael Salgado a migraine while the rest of the Real Madrid players try to stay away from him, but Ronaldinho shows his true genius right at this point, making a 30-yard pass to Samuel Eto’o look like the easiest thing in the world WHILE HE’S LOOKING IN THE OPPOSITE DIRECTION.

Eto’o then prods the ball wide, which is incredibly annoying.

Give as good as you get

The most talented players usually have to get used to taking kicks from the opposition defenders. For the likes of Maradona, Ronaldo and Messi, riding tackles and knowing how to avoid challenges solely designed to force them off the pitch becomes an art itself.

Ronaldinho became an expert, but it’s often forgotten just how tough he could be – this is the player who collided with John Terry and simply brushed him aside as if he were a child at the Camp Nou.

Probably knowing what’s to come later on, our protagonist gets his retaliation in first on the shithouse’s shithouse, Sergio Ramos, and he can’t quite keep the wild grin completely off his face even while getting booked.

But the Brazilian has only just started tormenting Ramos.

Ramos, especially in his formative years, was known for a propensity towards rash challenges, but the way he is sent spinning 360 degrees as Ronaldinho drifts past the defender’s swinging right boot is like a piece of performance art.

It doesn’t take much longer before Ronaldinho leaves the Spaniard on the floor. And there will be more of that later.

A reminder: it’s not even half-time yet.

As the clock reaches the hour mark, Ramos is left on the floor once again – of course he is – and this time it’s curtains for Real Madrid.

Ivan Helguera is left completely irrelevant as Ronaldinho gives Iker Casillas the eyes to rifle the ball in at the near post.

The goalkeeper’s reaction is splendidly pronounced, thoroughly fed up at the ineptitude of the players in front of him.

After the match, Spanish publication Sport wrote: ‘Watching Casillas is priceless. He lives on the edge of a nervous breakdown; all he can do is make great saves and remember the mothers of his defenders.’

Peak-Ronaldinho summed up in five seconds.

First, there’s the sublime touch to stop the ball dead, then there’s the sheer strength to hold off defender snapping at his ankles. Finally, there’s the ingenuity and audacity to flick the ball into the path of a team-mate.

Seventeen minutes after his first goal, Ronaldinho is repeating the same trick. Salgado is nowhere to be seen these days, while Ramos is left having to contemplate an existential crisis.

After the ball is slid into Casillas’ opposite corner, the stopper can only shrug in disbelief at what he has just witnessed. He wasn’t the only player to do so.

“When Ronaldinho scored that goal when he got rid of everyone, even his team-mates,” Eto’o later told Barca TV. “I stood there in disbelief, looked to one side and muttered to myself, ‘But, what is happening?’ It was unbelievable.”

‘This was not just a dazzling victory for Barcelona, it was also a complete humiliation of their arch rivals,’ Patrick McCurdy wrote in The Independent. But, to their credit, the Real Madrid fans took their medicine with good grace.

As Ronaldinho points to the gods in the skies he will surely join, sections of the Madrid support can only stand in applause at the Brazilian’s dazzling display.

It may have been a pointed gesture to their own players, but it was also an appreciation of one of the great performances. The previous Barcelona player to provoke such a reaction at the Bernabeu was a certain Diego Armando Maradona.

“It was a perfect game,” Ronaldinho later reflected. We’re not going to disagree.