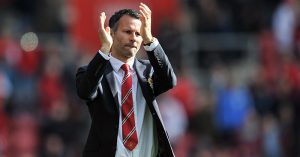 Manchester United’s Interim manager Ryan Giggs thanks the fans after the English Premier League football match between Southampton and Manchester United at St Mary’s stadium in in Southampton on May 11, 2014. The match ended in a 1-1 draw. AFP PHOTO/GLYN KIRK – RESTRICTED TO EDITORIAL USE. No use with unauthorized audio, video, data, fixture lists, club/league logos or live services. Online in-match use limited to 45 images, no video emulation. No use in betting, games or single club/league/player publications. (Photo credit should read GLYN KIRK/AFP/Getty Images)