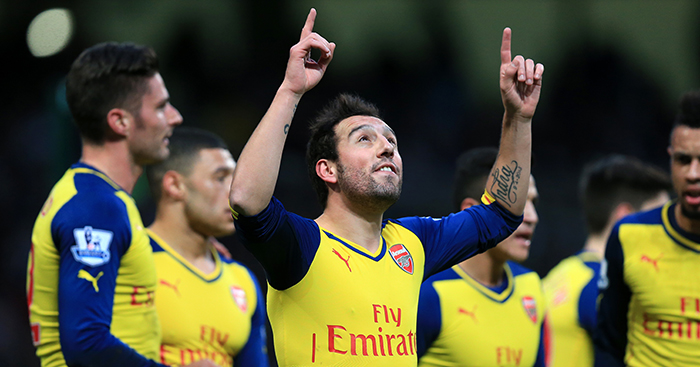 What is it that first comes to mind when you think of Santi Cazorla?

Is it his diminutive figure gliding past defenders with effortless control? His crisp, incisive passing both long-ranged and short? Or the set-pieces taken with either foot from all kinds of angles, making a mockery of other playmakers who abide by the concept of a ‘weaker foot’.

A master at controlling the tempo of a game like the other great Spaniards of the period, Arsenal were spoiled having Cazorla impose his magic on the football pitch week after week during his first three seasons at the club before injuries drastically reduced his involvement.

Among his catalogue of great performances is scoring against Liverpool on his debut and helping to complete a comeback against Hull City in the FA Cup final, which ended Arsenal’s nine-year-long trophy drought. The performance that people remember most, though, came in a 2-0 victory at Manchester City in January 2015.

The win was at the time seen as a seminal moment. Scoring twice and keeping a clean sheet seemed to be the beginning of a new chapter, one where Arsenal’s habit of being embarrassed by England’s top clubs away from home was starting to change.

Coming off the back of an FA Cup trophy the previous year, there was a real optimism surrounding the team’s whole performance – but Cazorla’s display was something else altogether.

When the final whistle blew and the post-match reporter asked Arsene Wenger if he had just seen “one of the outstanding individual midfield performances of Arsenal’s Premier League history”, the Frenchman’s answer was simple.

“When you’ve won the ball, you find Cazorla, you have always a chance to get out of pressure,” Wenger said. And that’s what happened, over and over again.

Calm from the start

Immediately evident from the performance is how positive Cazorla is when Arsenal are in possession. One-touch passing, floating out wide to combine with Alexis Sanchez for give-and-go’s before playing a successful through-ball into a dangerous area.

In the early minutes, he shows a glimpse of the domination that’s to come by controlling a loose ball in the centre-circle with his chest then calmly flicking it over a charging James Milner’s head – not entirely different to a matador performing in one of Malaga’s famous bullrings.

Arsenal at 0-0 are already sitting deep, with Cazorla being used alongside Francis Coquelin in a double pivot, another new role for a man who mastered three at Arsenal.

It’s worth noting that Coquelin was also outstanding throughout, intelligently reading the danger and dispossessing City players before they got into dangerous areas. Cazorla is repeatedly helped by Coquelin’s doggedness in winning the ball back and offloading it to his midfield partner, who holds the key to Arsenal’s creative impetus.

Receiving the ball after a Coquelin tackle on David Silva early on, Cazorla sets a precedent by using his quick feet to shift the ball to his right, beyond the reach of Fernandinho, and scurrying away to start a counter-attack.

This kind of composure whenever City pressed was what Arsenal desperately needed in such a match. City’s domination of the ball would have been even more striking without Cazorla’s quality, as Arsenal likely would have resorted to hoofing the ball up without anyone to retain possession.

Midway through the first half, some nifty link-up play between Nacho Monreal and Olivier Giroud results in a penalty for the Gunners.

Up steps Cazorla. His infallible technique ensures the ball is caressed with pace to the left of Joe Hart, beyond the goalkeeper’s reach. One-nil. This is Arsenal’s reward for their shrewd and patient start against dangerous opposition.

Following the goal, the stand-out aspect of Cazorla’s performance is his heavy involvement and sheer number of touches in the game (101). Typically of the ‘little magician’, he constantly drops deep to receive the ball and switch play, makes short snappy passes to recycle possession and drives forward purposefully when on the break.

Less typically but equally as effective, though, is his intercepting of a number of Man City passes and overall tenacity on the defensive end.

He willingly throws his body on the line on the edge of his own box and dives into tackles, somewhat reminiscent of Luka Modric when he was first deployed in the same deeper role at Real Madrid.

Highlight of the match

Cazorla notches up his second goal involvement of the game 67 minutes in, an exquisitely lofted free-kick from deep finding Giroud, who nods it into the bottom corner. By this point, confidence is clearly flowing out of the Spaniard with every touch of the ball – an utter masterclass.

But one moment of the game in particular is still remembered and regularly circulated around social media. A few seconds of magic and a microcosm of the whole performance.

Deep into the second half, Cazorla harries Stevan Jovetic out of possession on the edge of Arsenal’s box. With David Silva a yard away, Cazorla adjusts his feet and half-roulettes away, bouncing off the City player’s challenge before getting back to his feet and skipping past a sliding Frank Lampard.

Looking like a man possessed, Cazorla’s burst of acceleration is too much for Martin Demichelis who is left on his backside courtesy of a La Croqueta – a quick shift of the ball from one foot to the other.

The cherry on top is a step-over and nutmeg on Fernando, before an exhausted Cazorla, at this point near the centre circle, is finally brought down.

That sequence alone is enough to make us wonder if two mere FA Cups was a massively unjust reward for someone talented enough to start for most of Europe’s elite clubs in his prime.

There is also a ‘what if’ regarding his injury troubles at Arsenal and how the smiling Spaniard from Asturia could have helped the team in the dying embers of Wenger’s reign, despite his already pivotal role in Arsenal’s most successful period in over a decade.

Still, Cazorla’s collection of spellbinding performances is enough to ensure he will be remembered as a Premier League great.

Though the stakes will be far less now that he’s entering the money-fuelled world of Qatari football, the ability to mesmerise and bring joy to fans will follow Santi wherever he goes.