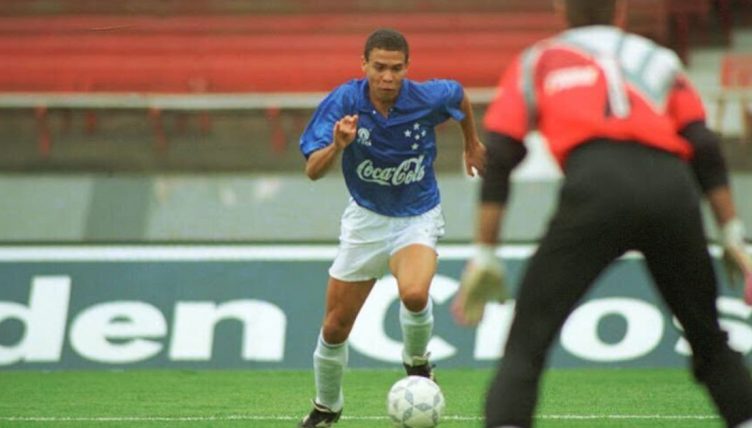 When someone mentions Ronaldo’s greatest performances, there are a few that immediately spring to mind.

The World Cup final in 2002, the UEFA Cup-winning masterclass for Inter Milan in 1998, the eviscerating hat-trick for Barcelona against Valencia in 1996, the three-goal display against Manchester United for Real Madrid in 2003 that earned him a standing ovation from the Old Trafford faithful.

But go back to the first half of the 1994 season in Brazil and Ronaldo, for those eagle-eyed few who were watching from Europe, put on a play in two acts that, through a combination of resilience and brilliance, hinted at the phenomenon that he was to become.

Ronaldo was playing for Cruzeiro. In the Copa Libertadores, they’d been drawn in a group of death with Brazilian champions Palmeiras, the eventual winners Velez Sarsfield and the mighty Boca Juniors, champions of Argentina in 1992.

Velez and Palmeiras were perhaps the better teams, but Boca were Boca – an away trip to the Bombonera and the home fixture against them at the Mineirao, Cruzeiro’s third and sixth group games, were the most intimidating prospects.

In the first game in Buenos Aires, Cruzeiro won 2-1, but Ronaldo was kicked out of the game. In the second, Ronaldo got his own back in the only way he ever knew how. He was just 17, but the way he scored was way beyond compare.

The ties against Boca were two of a few that established the Brazilian as a force to be reckoned with, a genuine budding superstar who could compete against the very best. This is how they unfolded.

Early in the first game at the Bombonera, in front of a baying crowd that included Diego Maradona, Ronaldo manifested his intentions.

He made two darting runs behind the defence, both of which were called offside. The second time he was dragged to the ground, despite the flag having been raised. Then he nipped into the box and was brought down, but nothing was given.

There was clear danger and the Boca defence decided they’d need to deal with him. The next time he picked the ball up, this time in front of the back four, Boca left-back Carlos Mac Allister, father of current Brighton midfielder Alexis, came in and, as Ronaldo turned, scythed him down.

The message wasn’t hard to interpret: you might be quick, but you’re not going to get past that easily, sunshine.

The second half started much as the first had ended, cynical challenges flying in on the teenage Brazilian forward. Some of them got to him, others he skipped over – but he could not find a way through to the goal.

Fourteen minutes after the break, Ronaldo picked the ball up again, charged forwards again and was dragged down again.

Yet this time it was not entirely in vain. His mentor and team-mate, the Cruzeiro right-back Paulo Roberto, stepped up and hammered the free-kick into the top corner in true Brazilian full-back style.

Cruzeiro scored again with a quarter of an hour remaining, but Ronaldo’s rough treatment did not stop there. Late on, as he ran towards the Boca half once more, he was on the receiving end of a thigh-high, studs-up challenge that sent him tumbling to the floor.

Between the two games with Boca, Cruzeiro had beaten Palmeiras at home and lost to Velez away. So, going into the sixth game of the group stage, they knew they needed to beat their Argentinian visitors to advance to the knockout rounds.

Ronaldo, fortunately for them, was ready to exact revenge. Never one for crunching challenges, he would seek retribution in the way he felt was right, dishing out some well-deserved humiliation.

Boca manager Cesar Luis Menotti, who led Argentina to the World Cup in 1978, had picked Ronaldo out in the build-up as the player Boca needed to be wary of and Ronaldo’s first touch was an indication of the sort of mood he was in on the night of April 6, 1994.

Receiving a throw-in in midfield, the young attacker was closed down by Carlos Moya. Moya’s legs were a little way apart. Ronaldo saw the opportunity and took it.

A nutmeg brought an early cheer from the crowd, who were still streaming into the stands. It came to nothing, Ronaldo unable to collect the ball on the other side. But with a minute gone Ronaldo had set the tone in his personal battle with the man tasked with marking him.

The game quickly took a turn for the worse from Cruzeiro’s standpoint. A mistake from 20-year-old goalkeeper Dida in the third minute allowed Manteca Martinez to fire home.

Ronaldo was ready though, and on fourteen minutes showed another side of his game. Rather than receiving the ball in behind the defence, he took it back to goal on the edge of the area and laid it off to Luis Fernando, who burst into the box and tucked it into the bottom corner.

One each was not enough for either team, but as the minutes elapsed neither could break the deadlock. It was exactly the sort of game that would bring the old ‘it’s going to need something special’ cliche from an English co-commentator.

The game did get something special, but before it did, there was time for the Brazilian radio co-commentator, Osvaldo Faria, to suggest this wasn’t going to be Ronaldo’s day. After all, the Boca marking was just too tight and violent.

But then, with 15 minutes to go, Ronaldo turned it on, as if he had heard Faria and thought, ‘Fucking have some of this then, you old misanthrope.’

The teenager found a little pocket of space between the midfield and defence, received the pass, turned and faced the four Boca defenders between him and the goalkeeper. Two came out towards him, but Ronaldo was too quick.

He skipped between them, the ball under his control like it was on the other end of an imaginary piece of string. Despite a surface that had more bobbles than your grandad’s old woolly jumper, he was bearing down on goal.

As a third defender faced him up, Ronaldo took another touch to the left, bursting into the box and now one-on-one with the ‘keeper. What next? You really don’t need to ask, do you? Ronaldo dribbled around the goalie in his signature style and poked the ball into the empty net with his left foot.

There was still a little time to waste, of course, 15 minutes in which to cling to a valuable result. Ronaldo was pressing and doing his defensive duties admirably, but he still had a little bit more humiliation left to dish out too.

A Cleisson cross was too long for Ronaldo to latch onto, forcing him wide with one man in pursuit. An experienced player might have made a beeline for the corner flag. Ronaldo thought differently. He saw Moya coming up behind him again, twisted left and then right without touching the ball. Moya was already in a spin.

Then Ronaldo took the ball to his right and turned to face Moya, to look into the whites of his eyes. Another chop of the ball in the other direction and Moya was gone. Ronaldo slipped passed and cut it back to Douglas, whose shot flew past the post.

No matter the miss, it was all over. Cruzeiro were going through and Boca were sent home to contemplate the beating that had been dished out to them by that indomitable adolescent.

Of the goal, Ronaldo, in the matter-of-fact style of a boy for whom such brilliance was normal, told the Cruzeiro in-house magazine: “I got the ball in midfield, and when I turned a few players came towards me, but I dribbled around them all.

“When I got into the area, I took it around the goalkeeper Navarro Montoya and just touched it into the net. A defender tried to stop it by sliding in, but he ended up in the goal as well. It was a golaco, unforgettable.”

It was a coming-of-age display, one of a few Ronaldo produced in the few short months he spent with Cruzeiro, and PSV must have been gazing on longingly. A few months later Ronaldo was off, moving to the Netherlands for his first taste of European football and opening a new chapter in a glorious career.