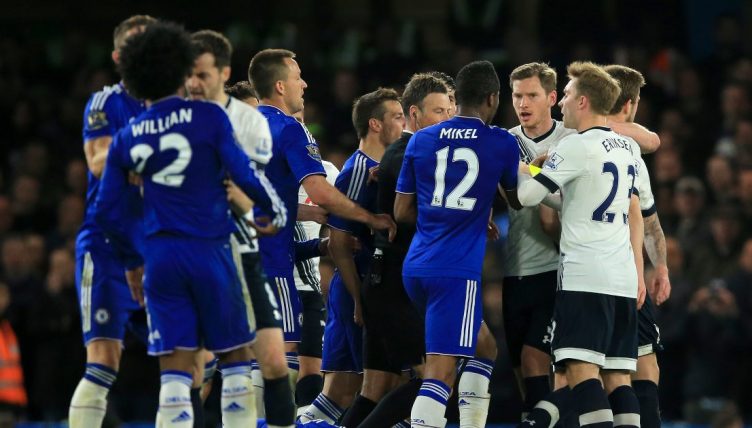 On May 2, 2016, Chelsea and Tottenham played out a crucial match in the Premier League title race, but it is remembered for all the wrong reasons.

Chelsea came from behind in a thrilling encounter to draw 2-2, thus handing the title to Claudio Ranieri’s Leicester City.

But a feisty encounter saw 13 yellow cards handed out, including nine to Tottenham players, the most for any team in a single match in the Premier League era, in a game labelled the most shameful in Premier League history by the media.

Just seven minutes in, John Obi Mikel and Mousa Dembele got caught up in the heat of the moment as a small shove from the Chelsea midfielder saw the players come together off the ball.

A few petty swipes saw play stopped by Mark Clattenburg in an attempt to calm tempers down. It didn’t work, as moments later Danny Rose took a swipe at Willian with a late slide challenge, which also went unpunished.

Having already kicked out at the Spaniard, Kyle Walker received the game’s first yellow card for clattering Pedro on the wing.

Many felt Walker could have received at least a booking for their earlier coming together, meaning Spurs could have been down to 10 as early as the 27th minute when Clattenburg finally produced a card.

If anyone was going to get caught up in Spurs’ actions, it would be Diego.

Costa was challenged on the halfway line by Erik Lamela, and when he tried to turn and make a run, Vertonghen didn’t let go.

The Belgian appeared to rip Costa’s shirt, which the Chelsea forward certainly wasn’t happy about. This came not long after Spurs took the lead, but Vertonghen became the second name in Clattenburg’s book.

Costa elbows and headbutts Jan but Vertonghen gets the yellow. Hmmmm?? @FA pic.twitter.com/8DVn6KQEEr

Tensions were high as Spurs went two up just before the break, and Willian reacted badly to a Danny Rose challenge in front of the dugouts.

Manager Mauricio Pochettino got immediately involved, as did a whole host of players and staff from either side.

In the midst of all the action, cameras picked up a nasty eye-gouge on Costa by Dembele, who was retrospectively banned for six games.

Immediately after the match, however, Chelsea skipper John Terry said: “It boiled over, let’s not start getting silly and banning people. It’s a London derby and the fans want to see it.”

Chelsea were coming back into the game, and after Gary Cahill pulled one back, Eriksen got involved with a poor challenge on Eden Hazard, which saw him booked.

Branislav Ivanovic took particular exception to this, and he was booked for an act of suspected revenge just one minute later when he hacked the Dane to the ground.

Hazard netted a brilliant equaliser for Chelsea, which snatched the Premier League trophy from Spurs’ hands.

The Chelsea players celebrated exuberantly in front of the visiting supporters, who in return showered them with coins and various missiles, earning furious reactions from the likes of Fabregas and Costa.

After the equaliser, things started to turn truly ugly.

Lamela, who had already been booked for a nasty lunge on Cesc Fabregas, was perhaps lucky to escape after standing on the Spaniard’s hand later in the game.

Eric Dier sparked a mass brawl when he scythed down Hazard, with Mikel joining the England midfielder in Clattenburg’s notebook for his reaction to the challenge.

Moments later, Dier landed an even worse foul on Fabregas yet somehow evaded a second caution.

Harry Kane and Ryan Mason were both booked in injury time as Tottenham saw the title slip out of their grasp.

The players trudged off the field, but out of nowhere, a confrontation sparked, seemingly involving Mauricio Pochettino, Cesc Fabregas and Spurs sub Michel Vorm.

It ended up with Chelsea’s 69-year-old manager Guus Hiddink being knocked down a flight of stairs in the dugout at Stamford Bridge.