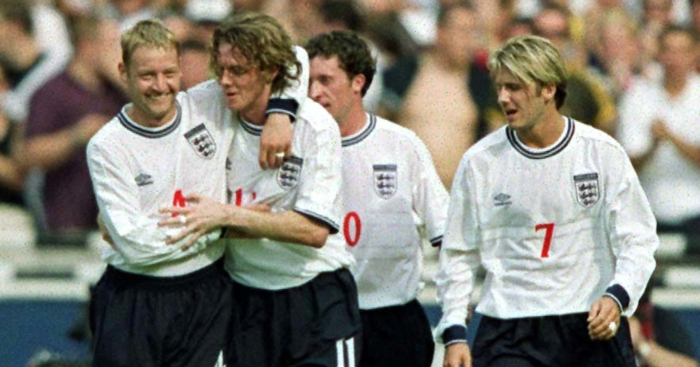 If you’ve seen Leeds United at any point over the last two years, you’ve probably heard Kalvin Phillips referred to as “the Yorkshire Pirlo”. What you probably hadn’t realised is that Andrea Pirlo refers to himself as “the Italian Batty”.

For all there is to love about David Batty’s personality, and dear God do we love him, the caricature of the former Leeds, Blackburn and Newcastle hero often overshadows what a superb footballer he was.

We’ve taken a look back at September 4, 1999 – the day Batty taught the world a lesson or two in how to run a midfield.

Alright, alright, let’s get the awkward bit out of the way. We’re talking about England’s 6-0 win over Luxembourg in a Euro 2000 qualifier. England v Germany, this ain’t.

But think about how painfully boring watching England outside of a major tournament can be. Think about those nights when using a bed of nails as a bouncy castle sounds preferable to watching England grind out a 2-0 win over Malta.

Basically, have you ever seen Declan Rice drive to the edge of the box and slip a striker through on goal with a no-look reverse pass? Have you fuck.

The grit and the guile

First a cheeky pass with the inside of his boot, and now it’s time for the outside.

Batty’s dour Yorkshire stereotype has unfairly coloured his perception as a footballer, as if he spent his entire career caked in mud, kicking people and passing backwards. Sure, there was a lot of that, but there was a lot more to it too.

It’s almost as if Luxembourg themselves are drawn into a false sense of security as Batty retreats towards the halfway line, only for one flick of his right foot to suddenly set England moving forward again.

The biggest compliment we can pay Batty here is that at first glance we assumed it was his pass from deep that set David Beckham free down the right.

Instead, the roles have been reversed, and it’s England’s No.7 dropping deep as their holding midfielder runs beyond the defence to chip a perfect cross onto the head of Steve McManaman. Why lash across goal or put in a hopeful stand-up to the back post when you can place the ball exactly where it needs to go?

Ever the misunderstood antihero, the BBC were underwhelmed by Batty’s contribution judging by the only mention he gets in their match report: “David Batty chased a long ball into the far right corner, waited for the galloping McManaman to arrive before chipping a simple cross onto the head of the Real Madrid star.”

England are 5-0 up before half-time, but there’s nothing to see here, apparently.

Two touches, followed by one perfect pass that lands directly onto Gary Neville’s right boot. The ball is kept moving, the pitch is being stretched and not a second has been wasted. Squint and you can almost see Kalvin Phillips 21 years later fulfilling the exact same role.

On a side note, has there ever been a footballer who looks more at home in a No.4 shirt and a pair of Puma Kings?

Is it possible to kiss a pass?

More time and space in midfield, more pinpoint passes to the wing.

Batty remains stationary while anchoring the midfield, but his pass sets the rest of the team in motion; Michael Owen pulls wide, Gary Neville has space to run into and England are once more on the front foot and attacking again.

Whether he was winding up Roberto Mancini or running an international at Wembley, Batty was always in control.

Batty won’t have got carried away by his performance, and he certainly won’t have been expecting some weirdo online to be writing about it 21 years later.

In a rare interview with Daniel Chapman for The City Talking, Batty explained that the novelty of playing for England quickly wore off as it became part of the routine of being a footballer.

“The problem with playing for England, and it still exists now, is that you’re so highly criticised at that level that there’s not much to gain from playing. There’s not much appreciation for your efforts,” he said.

A year on from his decisive penalty miss against Argentina in the 1998 World Cup, Batty’s immaculate performance against Luxembourg still prompted one irate fan to ring up BBC Radio 5 Live and complain that he had no idea what the midfielder was doing in the team in the first place.

This time, however, Batty had a rare friend in the press box. “One envied the bliss of the caller’s ignorance,” wrote David Lacey in The Guardian. “Over 90 minutes, Batty was England’s best player.”

Four days later, he was sent off in a 0-0 draw with Poland and never played for England again.

Andrea Pirlo? Not interested, mate. Give me Batts every day of the week.

Can you name the first four players to wear numbers 1-11 for Leeds in the PL?