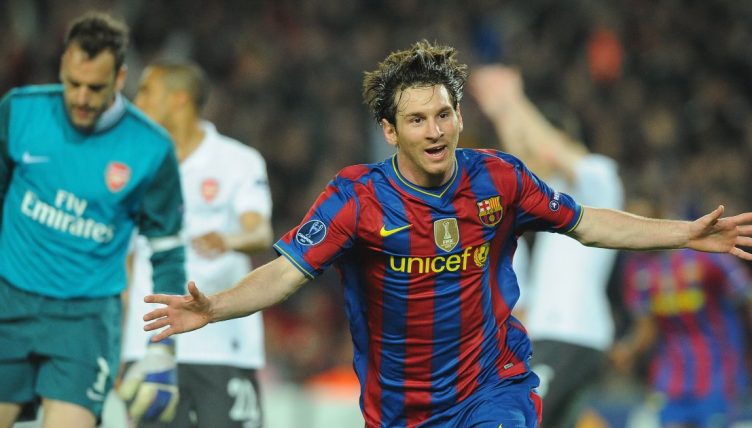 When Barcelona lost to Inter in the 2009-10 Champions League semi-finals, it was as big a surprise as any, not least because of the completely ruthless manner in which Barca – and Lionel Messi specifically – dismissed Arsenal in the previous round.

The idea of Messi being a world-beater was hardly new by April 2010, given his part in the previous year’s Champions League success and his goalscoring exploits over the preceding 18 months, but the game against Arsenal was something else entirely.

After a 2-2 draw in the first leg at the Emirates Stadium – Zlatan Ibrahimovic scored both for the visitors and Cesc Fabregas scored an equalising penalty with a broken leg – the London club stunned their opponents with Nicklas Bendtner’s early goal at Camp Nou. It turns out they were simply poking the bear.

After the teams and formations are presented on screen, the TV director focuses on Messi before any other player. This makes perfect sense, given his move into a more central role in Ibrahimovic’s absence, but it’s also an opportunity to see where his focus lies ahead of such a high-pressure game. Or at least a game which would have been considered high pressure by mere mortals.

Messi might not have scored in the first leg, but he had seven goals in his last five league games leading up to the return game – including home and away hat-tricks – as well as a double at home to Stuttgart in the last 16 of the Champions League.

And so, when you witness the Argentine looking around and muttering to himself, you don’t question it.

As part of a fluid front three with Pedro and Bojan, Messi’s role involved starting attacks as much as it did finishing them.

This began with a calm ball out wide to set up a move that ended in Xavi backheeling wide, but he soon decided to let Arsenal know they shouldn’t expect an easy ride.

With just four minutes on the clock, he flashed in a shot from the edge of the area which had Manuel Almunia in trouble, with the Gunners’ captain for the night flinging himself to his left to touch the deflected effort behind

For most, it wouldn’t even be classed as a chance, but this was the visitors being told, in no uncertain terms, that limiting the number of traditional chances would mean nothing.

Eleven minutes in, Messi earned himself another sight of goal. It was from a little further out this time, but anyone who had seen him in the weeks before will have taken a look at the curling effort and got worried.

At 0-0, Arsenal were very much still in the game, but the concept of tempting fate should last a matter of seconds rather than minutes. Sure, this one was off-target, but what about the next one, and the one after that?

Denílson and Mikael Silvestre couldn’t afford to be as lax again, or you knew they’d be punished. Seven minutes later, as Nicklas Bendtner poked the visitors into a surprise lead, the message will have been to keep careful.

However, that’s only possible when Messi lets you, and he was never in the mood for anything like that.

You know what else will prevent you from keeping careful? Messi scoring before you even have the chance to absorb the message.

There’s an element of fortune in terms of how the ball finds its way back at the Argentine’s feet from Silvestre’s interception, but everything after that is out of Arsenal’s control.

When we watch Messi, we’re used to guile and flair; we’re used to a man picking his spots and hitting the ball with the exact amount of power required and nothing more.

This strike, however, is venomous. It’s hit with every fibre of his being. It’s Messi’s left boot witnessing Arsenal taking the lead before turning towards them and saying, in no uncertain terms, “how dare you?”

Laying the defence to waste

If you were worried about the usual Messi giving way to a more no-nonsense version of himself, a mazy run just before the half-hour mark put an end to that theory.

Collecting the ball inside his own half, he produces the first run to ever give the impression that ‘he could dribble his way out of a phonebox’ is accurate and not just an exaggeration.

We’ll be seeing that again

Next, we see Messi bring down a 70-yard ball as if controlling a bean-bag, before driving at goal and slamming a shot into the side netting. It’s the kind of chance which will be the best sight of goal (and proudest moment) for most players in most scenarios, but to him it just feels like a wasted opportunity.

As he turns away, Messi scratches his head in disappointment, frustrated that he hasn’t been able to achieve absolute perfection.

It’s this attitude which paves the way for what follows, not just against Arsenal but in another of Barcelona’s Champions League runs five years later.

On that occasion, he’ll find himself up against Bayern Munich’s Jerome Boateng rather than Mikael Silvestre, but the positions will be near-identical. And, in the Bayern game, he’ll beat his man just as effortlessly but won’t make the same mistake of smashing a wild right-footed shot into the side-netting.

Fine, I’ll do it myself

When you look at Messi’s stats from the game – eight shots, six on target – you might be tempted to think he was greedy.

As it happens, though, he was only going for goal with such regularity because the rest of the team seemed so keen to deny his invitations to do the same themselves.

Messi’s go-ahead goal begins with him playing a defence-splitting ball into the overlapping Eric Abidal. It’s only when the Frenchman’s cross isn’t quite as inch-perfect that he’s called into action again, but at that point there’s no need for a second invitation.

One touch to get into a shooting position, another to beat Almunia. When you’re Messi, it really is that easy.

All over before the break

When a player shows he can wriggle out of the smallest of gaps, it can feel futile to attempt to squeeze him out. At least that’s the excuse we assume Arsenal will want to use when it comes to explaining Messi’s hat-trick goal.

As he races onto Seydou Keita’s smart header, the Arsenal defenders chasing back probably know they’re only doing it for show, so they can go in at half-time and convince their manager – or maybe just convince themselves – that they did all they could.

The thing is, they’re probably right. Sure, they don’t come out of this looking good, but it’s hard to think of a scenario where they would. At best, someone might get near enough to clip Messi’s heels and earn a merciful red card, but even that feels unlikely.

Messi is flying, so much so that he’s starting to take the piss. There’s no world where he needs to end the run with a dink over the advancing Almunia, but he can do what he wants. He’s decided early, too, just waiting for the moment the goalkeeper gives him enough space to get his boot under the ball before pulling the trigger.

Having completed his hat-trick with 45 minutes to spare, Messi decided to spend the second half giving someone else a chance. He’s good like that.

After a quiet 25 minutes, Arsenal had begun to try attacking again in the hopes of catching their opponents off-guard, so he decided to remind them who was really pulling the strings.

A quick free-kick, arguably taken with more urgency than his third goal, put Pedro clean through on goal. It’s not Messi’s fault if his team-mates can’t match up to his work.

Barcelona could have taken Messi off earlier if they wanted. He could have eased up, but why do that when it means leaving goals unscored?

While others might have been put off by the panicked desperation of the Arsenal defenders queueing up to stop him, Messi knows he can just wait it out. Eventually, he thinks, they’ll be out of his way and he’ll be able to get a shot on goal.

For once, Almunia was equal to the shot, only for the ball to rebound back to the feet of the Barca man.

It’s at this point that he stares down the goalkeeper as if to say, “Manuel, are you sure you want to do this? I mean, are you really sure? You can always say no.”

You know the rest.

“He has six or seven years in front of him, touch wood that nothing happens to him, and he can reach unbelievable levels,” Arsene Wenger said after the game. Who would have guessed that the Frenchman was underestimating how much more Messi could do?

“It is hard to think of anyone less likely than Messi to be nullified by mere strategy but there is no question that [Jose Mourinho] will think it feasible,” wrote The Guardian‘s Kevin McCarra. However, aided by the intervention of an ash cloud ahead of the first leg, Mourinho’s Inter outscored Barcelona by three goals to two over 180 minutes.

It’s fortunate, then, that Messi had those six or seven (or more) years ahead of him. Another Champions League title followed in 2011, and a third of his Barca career four years after that, while the 10 seasons since 2009-10 have brought six more domestic titles.

In that period he’s passed 50 career hat-tricks, too, March, but none have been better than his quadruple against Arsenal. Sometimes you step onto the pitch thinking you have a chance but leave knowing that was never really true.