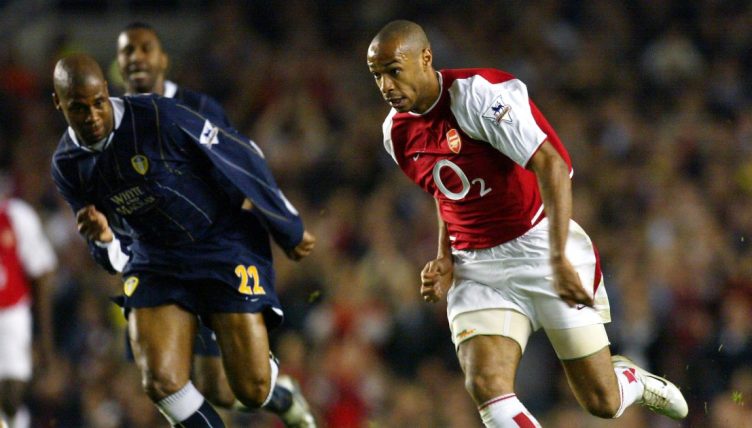 Thierry Henry struck the fear of God into literally everybody he faced when at his best for Arsenal, but none more so than poor Leeds United.

Plenty of players seemed to enjoy scoring against the Whites. Henry, however, took it to another level, to the point where Arsene Wenger guaranteed him a goal on his second debut for the club by bringing him on in an FA Cup tie against the Yorkshire club.

His previous appearance against Leeds had come eight years before that, on April 16, 2004. Eddie Gray’s side were soon to be relegated and Arsenal were soon to be crowned Invincible. After Robert Pires opened the scoring early on, Henry did the rest…

“Michael f*cking Duberry,” I’ve just muttered to myself, as a Leeds fan, having flashbacks to his days at Elland Road.

Gilberto Silva picks the ball up deep from Lauren’s slide tackle. He moves forward and spots the run of Henry, who is being kept onside by Duberry, relaxing 10 yards away from the most dangerous striker on the planet at the time.

If that’s not bad enough for Leeds fans, Duberry basically stands and watches as the ball goes through, before the lightbulb moment arrives and he gives chase. Slowly.

By that point, Henry was clean through on goal and into the penalty area. He finished calmly, left-footed, through the legs of Paul Robinson to double Arsenal’s lead. 2-0.

Leeds give away a penalty thanks to a careless handball from, you guessed it, Duberry. There’s only one man that is going to step up here.

Now, be mindful that Leeds at this point were teetering on the edge and needed a lift. So, what does the Frenchman do? Completely destroy Paul Robinson by executing a perfect Panenka down the middle of the goal.

Robinson boots the ball away towards the adoring Arsenal fan as it bounces out of the net with all the rage that humiliation brings. 3-0.

Gilberto picks the ball up deep again from Dennis Bergkamp and drives forward. He soon spots a gap in between Steven Caldwell and Duberry and threads a ball through the main man.

Classic Henry mode engaged. He gallops forward before opening his body up and curling right-footed past the onrushing Robinson, while falling to the ground.

Thierry, modest as ever, stands up and just looks at the Leeds defence. ‘Easy,’ he probably thinks. He couldn’t be more right. 4-0.

He’s only gone and done it again, this time off the back of some classic Wengerball.

Patrick Vieira to Gael Clichy. Clichy to Gilberto. Gilberto to Pires. Pires with a neat lay off to Henry. Duberry’s there, but not for long.

Henry glides past him with the grace of a gazelle and in the end, the poor lad just gives up, finally realising that he’s got as much chance of catching him as a one-legged man has of winning an arse-kicking contest.

Gary Kelly one side, Caldwell the other. Neither are going to stop him and they know it. Into the box Henry goes.

He’s falling again, but that classic finish is no different as Robinson again unsuccessfully tries to stop him. Open body, right-footed finish curled around him.

Fair play to Kelly though for doing exactly what most of us would have done and attempt to trip him up. It was the only chance he had. 5-0, game over.