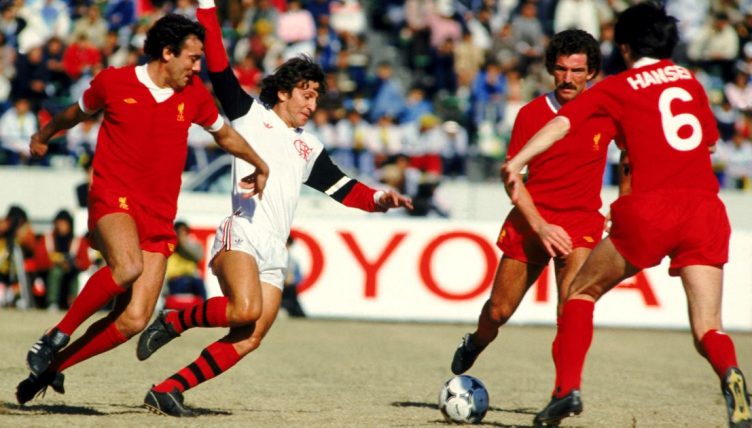 In the garage under the condominium where Zico’s family lives in Rio de Janeiro, there’s a 40-year-old Toyota, which he takes out on the odd occasion he’s in town and fancies a nostalgic spin.

The car, to be more precise, is a 1981, 2.4-litre, 16-valve, 96-cv Toyota Celica, silver in colour, and, four decades on, a little bit old-fashioned looking; boxy with those square headlights that were fashionable at the time.

For most, it may seem an odd choice of vehicle for a man who’s not short of a bob or two. Yet for Zico, it is a prized possession, one of the most important material things he has. He maintains it, loves it, and makes sure it’s always clean and polished.

Not because he’s any great lover of 1980s Japanese automobiles, though.

Zico keeps and cherishes the car because of what it represents. That Toyota is the physical embodiment of the December day in Tokyo in 1981 that turned him from one of the greatest players in his club’s history into an immortal, untouchable idol in the eyes of the fans of his beloved Flamengo.

The six months leading up to that moment in Japan had been golden; a blur of wins and glorious football.

In the first half of the year, Flamengo had failed to retain the Brazilian national title won in 1980. But even without taking the title, they’d shown signs of what was to come in the second semester. Tall centre-forward Nunes had been the top scorer in the competition, bagging 16 goals from the silver service provided by the man who played just in behind him.

The whole team was flowing, but there was no doubt about its star. Zico was 28 and at the absolute peak of his game.

As well as creating reams of chances, he was scoring at an incredible rate, 39 that year, knocking in free-kicks consistently and arriving late in the box to finish off the crosses whipped in by wide men Tita and Adilio and marauding full-backs Leandro and Junior.

In the first phase of the Rio de Janeiro state championship, which ran from May until November, Flamengo scored 81 goals in 32 games to make it to the final. And in the Copa Libertadores, for which they’d qualified by winning the national title the year before, they battled through the first group stage and blasted through the second.

In late November came the final of the Libertadores against Chileans Cobreloa. In a three-game epic full of dirty play – Cobreloa defender Mario Soto took a rock onto the pitch which he used to strike Flamengo’s most skilful attackers on the face – Flamengo had eventually prevailed thanks to two more Zico goals in the decider.

Owing to that win, they qualified for the biggest game in the club’s history – for in Brazil it is perceived as such: the Intercontinental Cup final against European champions Liverpool, to be played in Japan three weeks later.

First, they had the small matter of a state final against rivals Vasco da Gama, which, naturally, they won – 2-1 in front of 162,000 people at the Maracana.

Immediately after that trophy was secured, the squad travelled first to California for a short training camp and on to Tokyo.

The day of the game was bitterly cold. Before kick-off at noon, Flamengo warmed themselves up by playing a few samba tunes on the instruments they had brought with them for the trip. It clearly loosened Zico up, for in the first half, he was irrepressible.

Liverpool players will tell you that they did not take the tournament seriously, and certainly not as seriously as the South Americans, but however much effort they had put into their preparation, nothing could have primed them for what they saw that afternoon.

The first time he received the ball, Zico was face-to-face with Liverpool’s star man Kenny Dalglish and, as if to say, ‘I’m the boss on this pitch,’ had flicked it over the Scotsman’s outstretched leg before touching a simple pass to Leandro.

With his second intervention, Zico again dropped deep to pick up possession – it was a tactic Flamengo had devised to take advantage of Liverpool’s high line (sound familiar?). This time, four red shirts surrounded him, ready to close the space and stop him from working his magic.

Yet four was not enough. Zico bounced off one challenge, spun almost on top of the ball, took a touch with the outside of his right boot and drove into the corridor that had opened up ahead.

Still just 12 minutes in, Zico then found a pocket of space in the centre circle. He turned and, seeing Nunes making a run ahead of him, swung a balletic right leg at the ball, putting the perfect weight, elevation, direction and a delightful bit of backspin on the pass as if it were the easiest thing in the world.

The ball sailed over Phil Thompson’s head and landed just short of the onrushing Bruce Grobbelaar. Nunes knew it was coming – he’d seen hundreds of passes just like it already that season – and stole in ahead of the Zimbabwean ‘keeper to prod home first time and put Flamengo ahead.

“Zico and I could understand each other with just a glance,” Nunes said in 2019. “That first one I scored, [was because] I had good acceleration … [Zico] was confident in making the pass because he knew I’d get there. Everything we did in training came off.”

It was a lead they would not relinquish.

Zico’s confidence was flowing and a few minutes later he dribbled past Graeme Souness as if the Liverpool midfield hardman were a cone on a training pitch.

The time passed, but Liverpool could not get any closer Flamengo’s Galinho, or Little Cockerel, as he strutted across the pitch. Alan Hansen was the next victim, Zico nutmegging him with an outside-of-the-boot pass to find Nunes on the other side.

Ten minutes before half-time, the Brazilians won a free-kick just outside the box and of course their No.10 stepped up. His shot was parried by Grobbelaar, but fell kindly for Adilio, who doubled the lead.

Zico still wasn’t content and, after making time for a backheel nutmeg on Dalglish, a chapeu on Phil Neal (see below) and a lovely, dinked one-two with Tita, he put the proverbial nail in the coffin of Liverpool’s hopes of becoming world champions.

It was not so different from the first goal. Zico again picked it up in a central area and again turned to face the opposition. This time Nunes was advancing to his right rather than his left, so he poked the ball along the ground with the outside of this right foot and into the path of his strike partner.

Liverpool hadn’t learned their lesson; their line was high and Nunes was in. One touch took him into the area, another put the ball into the far corner of the Liverpool net.

“I didn’t expect that we would decide such an important game in just 45 miuntes,” Zico told Veja in 2011. “The only pity was that we were not alongside our fans, who are the greater reason behind all of our achievements.”

All Flamengo had to do now was see out the second period and they would become the first Brazilian team since Pele’s Santos in 1963 to bring home the much-vaunted ‘Mundial’.

That was what they did, Zico of course making a little more time to demonstrate just how much better he was than the opposition.

Another turn and dribble took him around Souness again and he played a ball through to Leandro who had burst forward from right-back. The pass was overhit, but Souness looked like a man who knew he was in the presence of one of the true greats.

Zico, the Scottish pundit said last year, “was one of the few players I could never lay a finger on.”

When Zico was tackled at one point on the second, the Brazilian commentator screamed “finalmente!” – finally! You can only imagine that’s what the Liverpool players’ internal voices were exclaiming too.

As Flamengo pinged the ball around, Zico had a couple of more opportunities to display his range, first flicking a wonderful, first-touch pass over Sammy Lee’s head to winger Lico (see below) before a round-the-corner backheel to Adilio.

“That was one of the greatest games that we played,” Zico continued to Veja. “That team was really good – we linked up, had great technique, quality. There was a lot of professionalism and a great desire to win.”

With the game won, there were two things for Zico left to do.

First, he lifted the bulbous pot presented to the winning captain, then, as the man of the match, he was handed a giant novelty key to a car that sat atop a podium in the corner of the stadium. It was the top-of-the-range new model, provided by the sponsors Toyota; a 1981 Celica.

At the time Brazil lived under a repressive military dictatorship and one of many things that was banned was the import of motor vehicles. As such, the Flamengo captain had to pull a few strings.

A year later, after enlisting the help of the president of the Brazil Central Bank, the ex-president of Flamengo and the Minister of the Economy, the car finally made its way to Rio and Zico parked it in the garage where it remains as a trophy to this day.