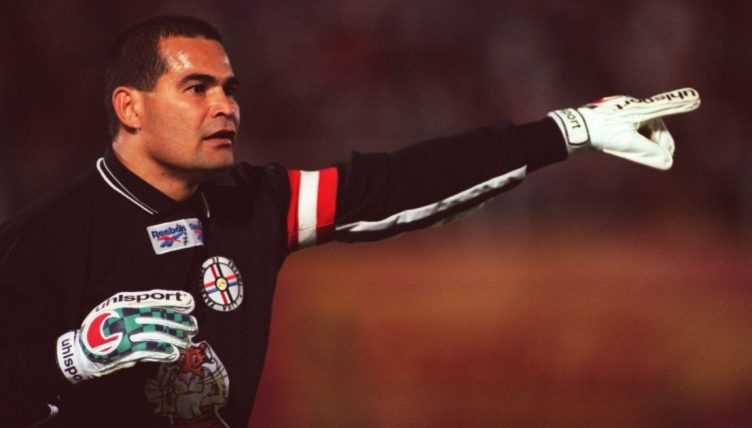 When it comes to overly specific genres of footballer, the free-kick taking goalkeeper is hard to beat.

We’ve enjoyed the likes of Rogerio Ceni curling the ball in from outside the box, while sweeper-keeper extraordinaire Rene Higuita was also known to produce the occasional devastating set piece.

However, the king, the daddy of them all, was Jose Luis Chilavert.

Many fans got their first proper glimpse of Chilavert at the 1998 World Cup, during which he forced a save from Bulgaria goalkeeper Zdravko Zdravkov in an otherwise dire goalless draw.

It wasn’t just a mindless blast, either. The Paraguayan got enough power and whip on his delivery to send it heading for the top corner, were it not for Zdravkov’s intervention.

Sending a goalkeeper up to take a shot from 25 yards feels like an extremely high-stakes game of chicken, with the very evident risk of a counter-attack if he finds the wall or sends the ball into his opposite number’s hands, and this level of risk can only draw more admiration for anyone willing to give it a try.

It’s broadly unnecessary, unlikely to come off on the majority of occasions, and guaranteed to put your team at great risk when it fails – what’s not to love?

He went one better in 2002, calling Slovenia’s Mladen Dabanovic into action from 35 yards with his team leading in the game.

He didn’t even need to come forward – there were only 11 minutes left to hold onto a lead in a must-win game and, as the goalkeeper (yes, it’s easy to forget that detail) maybe he should have been focused on that priority.

We’re glad he wasn’t, though. The incongruity of the one man in a different kit waving his uniformed team-mates aside has an aesthetic appeal to it, even before you begin to think about the metagame of it all.

When you see Chilavert step up and take a free-kick like this, there’s one incredibly striking conclusion you’re forced to draw: this is a man who regularly practices doing just this.

While other goalkeepers are sharpening their reflexes or perfecting that charge from the goal-line to claim a cross, he is lining up a dummy wall and looking to find the top corner with pace and dip.

While other keepers practice making themselves look big in one-on-one situations, he’s sweeping a ball into a bucket from 25 yards away.

You’d think this might impact on his principal job, but even here you’d be mistaken. This is a man who produced save after save to keep eventual World Cup winners France at bay for 113 minutes, and held off 2002 finalists Germany for 87.

He wasn’t just a gimmick merchant, he was a top-class goalkeeper by any metric.

While the World Cup displays might live longest in the memory, fans of Chilavert from his time in Argentina will have another goal in mind when they hear his name.

It came for Velez Sarsfield against River Plate in 1996, and the presence of Argentine international German Burgos at the other end of the field might have put off some other players.

However, after noticing Burgos was “watching birds rather than concentrating on the game”, he let fly from inside his own half, pinging a shot over the rapidly ducking referee and into the opposite net without even bouncing before it crossed the line.

With the other free-kicks mentioned in this article, the theoretical stupidity could be balanced out by the level of confidence Chilavert had in his own deliveries. This one, though? No one should be shooting from there, however good they think they are.

Jose Luis Chilavert’s entire career was an exercise in making your own rules, but if he wasn’t good enough at playing by everyone else’s then he wouldn’t have even had the chance to do that.

He refused to be restricted by football’s norms, regularly ignoring what is expected of a man in his position but often going further than that and effectively spitting in the face of the guide while still obeying the rulebook.

In a world where players are conditioned to the max, pushing the limits of their fitness while valuing discipline above all else – it’s hard to conceive of a goalkeeper with Chilavert’s maverick streak getting anywhere near the top of the game. Not because he wouldn’t have the quality to pull off these things, but because no one would conceivably let him.

Maybe that’s what we’re missing now, too: the raw quality of the football on show might be better now, but sometimes the sport should be about more than that.