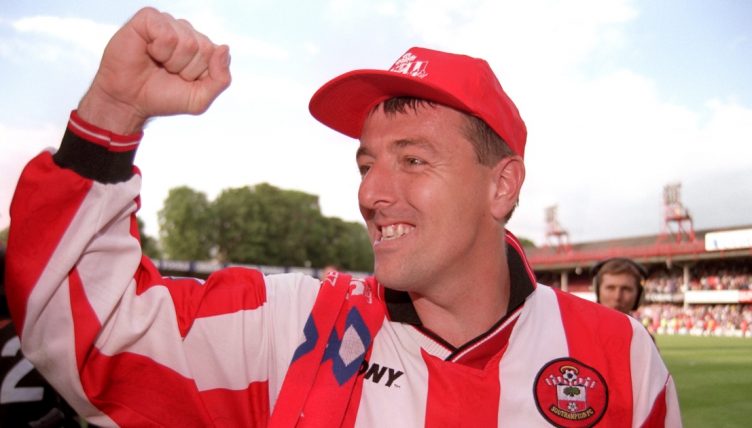 Outside of Southampton, there won’t have been many Saints players who had playground show-offs pretending to be them. Matt Le Tissier was the exception.

When you’re having a kickabout before school, tennis ball or flat size four screeching around the tarmac, you’ll often dream big. In the 90s that meant playing as Alan Shearer or Andy Cole when the pair were banging in goals for fun, while more recent three-and-in masters might opt for Ronaldo or Messi.

However, there has always been something intangible about the very best, a sense that – even as a six-year-old in the playground – those heights were unscalable. It wasn’t like this with Matt Le Tissier, though, and that’s what encouraged so many to idolise a man who you wouldn’t imagine could be one of the best in the country until you saw him with the ball at his feet.

Certain footballers can look like they belong to an era: Ronaldo and Michael Owen lent themselves to the late-90s genre of pacy goalscorer, while the trickery of players like Jadon Sancho and Callum Hudson-Odoi feels very 2019.

With a lot of his contemporaries, you could centre in on their quality by identifying them as the best at doing a certain thing, be it reading the game from the back, dribbling past a defender or finishing from any and every position.

Le Tissier’s brilliance came from being the best around at the other bits. The things which other players couldn’t do, and in many cases didn’t even need to do.

The best footballers in the world could get by without doing any of the things he was good at, and football could comfortably have survived and thrived without him existing, but that is what made Le Tissier – and the goals he scored – so much more vital than anyone could feasibly explain.

This goal against Wimbledon was the kind of thing you sense you’d never see on-screen unless he made it happen, testing the boundaries of what you were even allowed to do on a football pitch. Was it within the spirit of the game? It didn’t matter, as long as it was in the spirit of his game.

If you had to pick a saying to summarise Le Tissier’s treatment of his opponents, it would surely be, “It’s easier to ask for forgiveness than permission.”

The disrespect with which he treats those in his wake carried the permanent air of a man thinking, “I can’t believe they keep letting me get away with this,” with the approach forcing him to push boundaries that bit further to see just how much more it would take for opponents to actively down tools and start kicking the shit out of him.

Somehow, the presence of thousands of fans and many more watching TV offered him a kind of implied protection: if you did a lot of what he did in a kickabout with friends, you’d need to find new friends.

His goal of the season winner in the 1994-95 season was one such example, where if you zoom in on Blackburn goalkeeper Tim Flowers you can see him say, “Come on mate, that was just unnecessary.”

That was Le Tissier, though. ‘Necessary’ was never a consideration, and showing off was a way of life rather than an occasional thing. It didn’t matter that his team lost this game – the following season, he would score a hat-trick in a 4-3 defeat – as long as the eventual champions would be able to look at his strike as the one marginal blot on a phenomenal season.

When you look at someone like Le Tissier, a man for whom chipping Peter Schmeichel barely registers on the highlight reel, it’s hard to settle on one standout goal.

However, among all the moments of genius, one moment stands out as, if not Le Tissier’s best goal, his most on-brand.

It came against Newcastle United in 1993, and it’s the kind of goal no one else would think to try, let alone execute. Even the individual components are beyond most players.

“There’s a lot that goes through your mind that happens pretty instinctively – or at least they did for me on a football pitch. It’s only when you look back and think, ‘Blimey, there was a lot that went into that,’” Le Tissier told The Guardian when reflecting on the goal years later, and that manner of reflection tells you a lot of what you need to know about him.

He was always the sort of player who you felt would think about his achievements more deeply after the fact, as if doing so while in motion would simply spoil the magic. As if the instinct served to power itself.

Le Tissier scored more than 200 goals in his career, but none of them in an England shirt.

It was as if any attempt to move his oeuvre away from Southampton would diminish its power, that the red and white striped shirt accentuated anything and everything he did.

When you played as Le Tissier in the playground, it wasn’t as the England version. You were smart enough, even then, to know how these things worked.