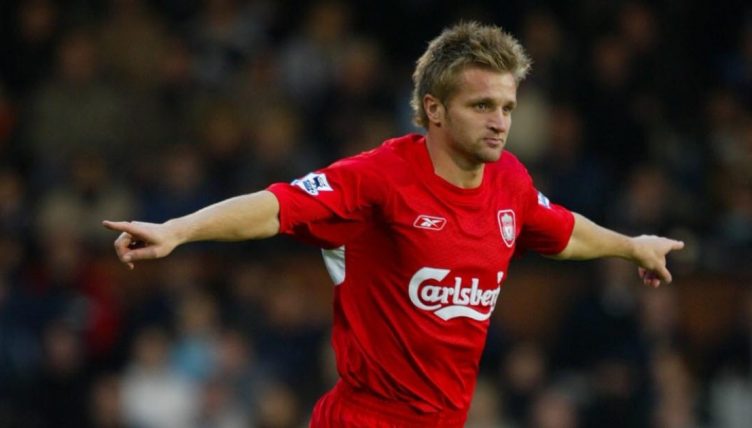 Djibril Cisse. Milan Baros. Florent Sinama Pongolle. Neil Mellor. No, not a list of underwhelming Liverpool forwards from the 2000s but rather all players who scored during their successful 2004-05 Champions League campaign.

We love to talk about the Miracle of Istanbul, but frankly, looking back, the real miracle is that squad getting to the final in the first place. Josemi, Antonio Nunez, Anthony Le Tallec all made multiple appearances. Djimi Traore started 10 games FFS, the same number as Steven Gerrard.

But while Traore winning a Champions League medal has become a meme, you might have forgotten another comedy name from Liverpool’s past played a genuinely crucial role in their success in Europe that season. That’s right, Igor Biscan.

As was customary for underwhelming Gerard Houllier midfield signings, Biscan was likened to Zinedine Zidane when the Reds paid £5.5million to get him from Dinamo Zagreb in December 2000, allegedly fighting off rival interest from Barcelona, Juventus and AC Milan.

Rumours of interest from such clubs quickly appeared fanciful. Biscan, it turned out, was definitely not the Croatian Zidane.

In his defence, he actually started pretty well. After making his debut as a substitute in a 1-0 defeat at Ipswich, Biscan played the full 90 minutes in a 1-0 win at top-of-the-table Manchester United the following week. “The central midfield partnership of Steven Gerrard and Igor Biscan were particularly impressive,” read the BBC report.

It got even better in the next game as Biscan again played the full 90 minutes, this time in a 4-0 win over second-placed Arsenal at Anfield. Had Houllier found the man to take the team to the next level?

No. Despite Biscan’s impressive start, he soon found himself behind Gerrard, Didi Hamann and Gary McAllister in the pecking order and played only four minutes of Liverpool’s last six Premier League games, not making the squad for either the FA Cup semi-final or final.

He did play in the eventual victory over Birmingham in the League Cup final, however, and with a pre-season behind him, he might have fancied his chances of nailing down a place alongside Gerrard in 2001-02.

It didn’t happen. Over the next two seasons combined, Biscan started seven games in the Premier League. And on the rare occasions that Houllier did trust him enough to give him some minutes, it was usually at centre-back, full-back or on the wing.

He made a breakthrough of sorts in the 2003-04 campaign as injuries afforded him 39 appearances in all competitions, but they almost all came in defence. Bruno Cheyrou and Salif Diao were getting starts ahead of him in midfield.

And in March 2004, the nail was hammered in Biscan’s proverbial Liverpool coffin when he was sent off after 36 minutes of a UEFA Cup defeat to Marseille.

“We would have won the UEFA Cup that year but for that tit’s shirt-pulling,” wrote Gerrard, hilariously, in his autobiography.

Biscan was not even in the squad for Liverpool’s last six Premier League games of the season and his career at Anfield was surely about to end.

Or was it? Markus Babbel, Danny Murphy and Michael Owen were moved on that summer, but Biscan remained to fight for a place – and, crucially, Benitez was willing to play him in his preferred position.

Not that often, like – the Croat only started eight times in the league that season. But in the Champions League, he was a regular and genuinely outstanding.

It all began away at Deportivo when, with four points from their opening three group games, Liverpool claimed a 1-0 win which was crucial to them making it through to the knockouts. The best player and the man who made the goal? Biscan, on his first European start since that fateful night against Marseille.

Gerrard was injured, but you could be forgiven for watching this run from midfield and believing Liverpool had played an elaborate trick on us all and sent the Scouser out in a Biscan shirt. Just look at it: the touch, the tight turn, the drive between three players, the pass, who needs Gerrard when you’ve got Biscan?

“Where the Croatian midfielder was once painted as a figure of fun, his dozy expression befitting his rather ponderous and occasional displays in the first team, Biscan is a player reborn,” read The Guardian report.

“Biscan made the most of a rare opportunity to take the playmaking role normally held by Steven Gerrard or Xabi Alonso. His creativity and composure was complemented by tenacious tackling, helping Liverpool establish instant ascendancy,” it said in The Independent.

A couple of weeks on from a brilliant goal with his second touch as a substitute against Fulham, the fans sung Biscan’s name with joy in their hearts that night in La Coruna. Things were changing.

He wasn’t involved on *that* night against Olympiakos in Liverpool’s final group game, but once the knockouts began, Biscan came into his own. From the last 16 against Bayer Leverkusen through to the semi-final against Chelsea, he played in all but four minutes. Gerrard, Alonso and Hamann all dropped in and out for one reason or another, but Biscan was the constant.

And though he was used nominally in a holding midfield role, breaking up attacks, he would regularly drive up the pitch. And when he got there, he was doing stuff like this in the home game against Leverkusen, setting up Luis Garcia with a through-ball the BBC described as exquisitely weighted”.

We’d love to know what was in the water in Liverpool that season, but Igor Biscan suddenly looked like a world-class midfielder.

He got another assist in the away leg against Leverkusen when his goalbound header was directed in by Garcia, and he would play huge roles in the successes against Juventus and, in particular, Chelsea, when the Reds shut up shop to defend another goal from Garcia.

In all four of those games, Biscan started as one of two holding midfielders, usually with Gerrard ahead of him. Why Benitez dropped the skipper back for the final to accommodate Harry Kewell at Biscan’s expense only he will know, but the Croat – along with plenty of others – must have thought his boss had made a big mistake by the time Milan had gone 3-0 up.

And he must have felt even more hard done by when Benitez did bring on a second holding midfielder at half-time but opted for Hamann instead. Had that gone wrong, questions would certainly have been asked of the Spaniard afterwards.

As it turns out, it didn’t work out too badly, but Igor Biscan, Croatian Zidane and *the* unsung hero of 2005, it’s time someone said it: you were robbed, mate.