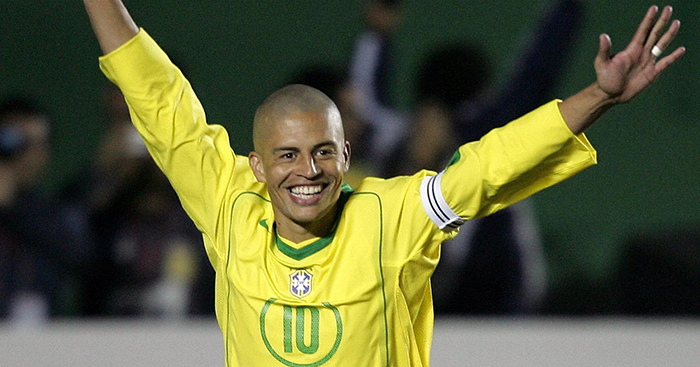 A former Brazil captain. A one-of-a-kind attacking midfielder. A 28-goal season at the age of 33. But will anyone outside of Turkey remember Alex?

In 1999, Alexsandro de Souza — at the time a promising midfielder for Palmeiras in São Paolo — was given an impressive (if highly confusing) award.

With 13 goals in both international and club continental competitions across the calendar year, Alex was honoured as one of the three ‘Best Top Goalscorers’ in the world by the International Federation of Football History & Statistics.

Tied with Rivaldo for second and a goal behind overall winner Raúl, Alex was just 22 at the time. He seemed destined for big things.

In fairness, you’d need very high expectations to argue that Alex didn’t achieve big things over the course of his two-decade career.

The midfielder earned 49 caps for Brazil, captained the national side to Copa América glory and earned legendary status in Turkey with Fenerbahçe.

But in an age of larger-than-life Brazilian superstars, Alex’s name can easily be forgotten.

When at the peak of his powers — a peak that lasted an improbably long time — the always intelligent and occasionally explosive playmaker found himself competing for attention with the likes of Rivaldo, Ronaldinho and Kaká.

Here are the reasons why, try as you might to resist, you are going to forget about Alex.

It hasn’t always been that way: in 2004, when a 26-year-old Alex signed for Fenerbahçe, his most potent goalscoring team-mate was a 34-year-old Pierre van Hooijdonk, who had just finished the 2003-04 season with 24 goals.

In his first season, Alex matched that total from midfield, finishing as the league’s top scorer and kickstarting a close relationship with the club that would last just over eight seasons.

Shortly before he was pressured out of the club by manager Aykut Kocaman early in the 2012-13 season, a fan-funded statue of him was erected in Istanbul.

It’s easy to see why: across those golden years, Alex scored 136 league goals in 245 appearances, including a career-best of 28 in 33 during the 2010-11 campaign. Incredibly, Alex was 33 at the time of that particular achievement.

But if European eyes occasionally wandered to the Süper Lig to keep tabs on the likes of Nicolas Anelka and Rigobert Song, Brazilian eyes rarely did.

By committing himself to the Istanbul giants for so long, Alex kept a low profile and effectively brought an end to his international career.

The tragedy is that, for a time, that international career seemed to be blooming into something magnificent.

Between 1998 and 2005, Alex earned 49 caps for Brazil, scoring 12 goals. On their own, those numbers sound impressive, but the true events paint a different picture.

In 2003, Alex was 25 and had just won a domestic treble with Cruzeiro; his individual performances even earned him the Golden Ball for the league’s best player. Although he had narrowly missed out on a place at the 2002 World Cup, stardom surely beckoned.

Brazil coach Carlos Alberto Parreira paid attention to Alex’s achievements, rewarding him with a place in the 2004 Copa América squad.

There, Alex not only provided the ammunition for in-form striker Adriano but even captained the side, starting every match bar one.

In the semi-final penalty shootout against Uruguay, Alex converted the winning kick. Four days later, he lifted the trophy.

But a glut of attacking midfield options in the Brazilian side, combined with Alex’s imminent exile in Turkey, meant the attacker would never feature at a World Cup.

Even players less talented than Alex — those like Edu (Arsenal), Renato (Sevilla) and Ricardinho (Corinthians) — reaped the rewards of playing in a top European league or in their home nation.

In Turkey, Alex was simply off the radar.

In 2008, at the age of 31, the Fenerbahçe star still expressed hope of returning to the national side. “I think I’m still playing well enough to get back in the side and if that happens one day then I’ll be delighted to go back,” he told FIFA.com.

“There are so many options that have to be considered when you’re picking the Brazil team and sometimes the decision goes in your favour and sometimes it doesn’t.

“You have to respect that because those decisions invariably involve players with a tremendous amount of quality.”

Pose the question “Remember Roque Júnior?” at a noisy pub gathering, and you’ll undoubtedly get some kind of positive response.

Do the same with “Alex”, a player who has one more cap than Roque Júnior, and you’ll elicit nothing but confusion.

Alex who? Boy or girl? At best, or at worst, you’ll get a nod of approval from a Chelsea fan, remembering not the supremely talented Alex of Fenerbahçe but the similarly Brazilian, similarly bald-headed brute born five years after his namesake.

And therein lies perhaps the biggest reason for Alex’s anonymity. If the midfielder placed himself in the left field by playing in Turkey, he made himself virtually untraceable by putting that four-letter, un-Brazilian-sounding name on the back of his shirt.

In all seriousness, Alexsandro de Souza will, of course, be remembered fondly, hopefully for a long time, by supporters of Fenerbahçe, Coritiba, Cruzeiro, Palmeiras and even Brazil.

But a combination of factors — a lack of international focus on the Turkish Süper Lig, competition for places in the Brazilian national side, peaking at the age of 33 — mean Alex’s legacy may never, in the grand scheme of things, adequately honour his talents.