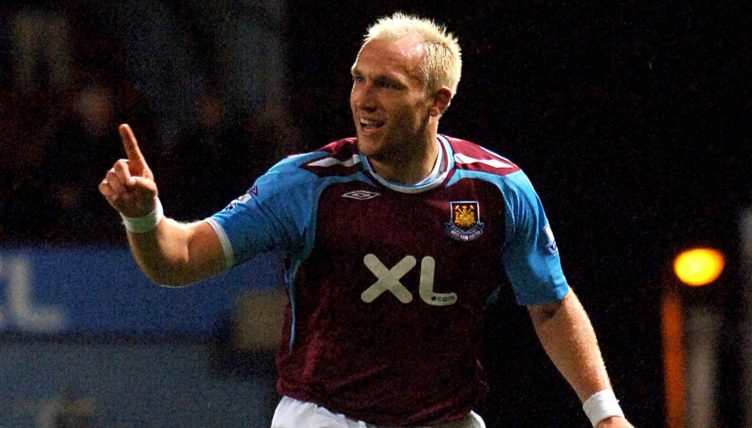 After shining for Norwich City and West Ham, Dean Ashton became one of England’s big hopes, but a combination of factors meant we never saw the best of the striker for the Three Lions. It’s a sad ‘what if’ story.

Every time an England squad is announced for a major tournament, we get the inevitable complaints about certain players missing the cut, albeit for different reasons.

Occasionally we’ll see complaints that the squad gets packed with established names at the expense of exciting youngsters, while at other times we’ll wind up with younger players from top clubs making the cut ahead of in-form talents from less-fancied clubs.

The latter was certainly the complaint of many when Theo Walcott made the squad for the 2006 World Cup ahead of Darren Bent coming off the back of an impressive season with Charlton.

But there was another player who could feel hard done by: Dean Ashton.

Being overlooked was a recurring theme. In fact, you have to wonder how many more of those predicted future England XIs – which brought notoriety to the likes of Dean Parrett and Patrick Roberts – he’d have featured in had he come through the ranks of a top club’s academy rather than Crewe’s, which was still known for producing top talents but certainly not at the same rate as in the 90s.

However, those who saw him in the early part of his career can attest he was always a special talent.

Indeed, after he left the Cheshire club for Norwich in January 2005 with them in the top half of the Championship, they proceeded to go 18 games without a win and only stayed up on the final day of the season.

Even then, aged just 21, he looked as close as you could get to the complete striker, scoring 20 in 27 games for the Alex and adding seven for a struggling Canaries side after making his top-flight bow.

That tally included a quite lovely volley against Manchester City, the finish of a young man who felt he couldn’t fail with anything he attempted.

Looking at Ashton, most would never have identified him as a man capable of such subtlety, but a lot of that can be put down to England’s specific record with players of his ilk.

The Three Lions have often resisted demanding too much of their frontmen: either giving them the ‘Big man up top’ responsibilities or ensuring they’re nippy with tidy finishing ability – as if anticipating every single pairing should be modelled on the platonic ideal of Niall Quinn and Kevin Phillips.

In fact, going all-in on a combo that was happy with some nice moments and a seventh-place finish does seem quite England, on reflection.

Anyway, by tempering expectations, the sight of a more complete frontman has tended to confuse people, leading to Ashton – even off the back of another great season in 2005-06, overlooked for that summer’s World Cup in Germany.

Indeed, when Walcott was handed a surprise call-up having played no first-team football since January that season, Darren Bent – not Ashton – was the man who many said should feel hard-done-by.

But while not as prolific as some in that half-season, Ashton was capable of scoring goals you wouldn’t back others to produce – not least his clincher in the FA Cup quarter-final win over Manchester City.

The sight of a hefty striker dancing through a defence with grace and tidy footwork is an underrated genre of goal, like a bear performing ballet, and this was on par with Johan Elmander doing the same for Bolton a few years later.

It showed Ashton had that touch of class needed to unlock bunched defences, and – with fitness question marks around some of the other squad members that summer – it’s very easy to make retrospective demands for his inclusion with the benefit of a decade’s distance.

Of course, Ashton’s fitness in the summer of 2006 would almost prove ironic given the struggles later in his career, beginning with his first England call-up not long after that World Cup.

An injury in training, following a challenge from Shaun Wright-Phillips, ended up being one from which he never fully recovered, though there was one more hot season – and one stand-out goal – to celebrate before his early retirement in 2009 at the age of just 26.

Ashton’s consolation goal in West Ham’s May 2008 defeat to Manchester United was to overhead kicks what Ashton himself was to No.9s: very different to what we’ve come to expect from the genre, but that doesn’t mean it doesn’t work.

Overhead kicks, generally speaking, can be divided into the Rivaldo-style self-assisted efforts and the side-on excellence produced by the likes of Eidur Gudjohnsen for Chelsea against Leeds United.

Ashton’s was neither of these things, yet the ugly beauty of the finish was a sight to behold.

Ashton eyes up the ball like a sniper keeping sight of a moving target, but the process is complicated by his own continued need to readjust. And yet, with the close attentions of Rio Ferdinand and the looming sight of Edwin van der Sar, not once did he seem to consider the prospect of not making a clean contact on the ball.

Would it have been easier to go for a header? Yes. Would it have been more efficient to bring the ball down and beat Van der Sar that way? Almost certainly. Would we be talking about the goal if he’d done either of those things? Heavens no.

Sadly for Ashton, whose one England cap would come that summer, that was pretty much the end of it. He managed just a handful of games the following season before his ankle flared up once more and he made the difficult decision to walk away from the game.

Had England qualified for that summer’s European Championships, he might have been given his chance at a major tournament.

But then again, a healthy Dean Ashton might itself have been enough for England to qualify in the first place.

With England misfiring on more than one occasion in tournaments, conversations invariably turn towards those who played and failed to score. But perhaps we should be talking about the missing piece of the jigsaw who wasn’t there.

TRY A QUIZ: Can you name every member of England’s 2002 World Cup squad?