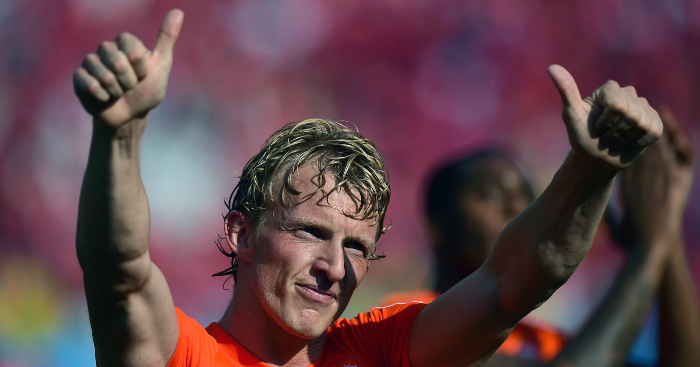 When Dirk Kuyt, sitting on 98 caps, was named in the Netherlands’ squad for the 2014 World Cup, most felt he was going as a dressing room figure and would fall short of his century. What followed were four weeks that epitomised everything that made the former Liverpool cult hero great.

Kuyt was 33 at the time, well past his peak, and hadn’t played for his nation since October the previous year. Manager Louis van Gaal had adopted a system that didn’t feature wingers. Robin van Persie and Arjen Robben had the two forward positions nailed down; it was difficult to see a place in the team for Kuyt.

Thankfully, Van Gaal had other ideas.

Another World Cup, another position

In 2006, he was back-up to Ruud van Nistelrooy up top and started the brawl against Portugal ahead of him. In South Africa four years later, he started every game out wide in Oranje’s run to the final. His backwards journey continued in Brazil when, in the final group game against Chile, he started at left wing-back.

It’s fair to say this raised eyebrows – sure, he’s versatile, but that versatile? What’s more, he was not only up against Juventus man Mauricio Isla but also tasked with helping to stop Alexis Sanchez, who was rather handy back then. Strange thought, isn’t it?

To everyone’s surprise, Kuyt rose to the challenge, and then some. He stuck to Isla like a rash, matching him in both speed and stamina, and was crucial in silencing Sanchez. 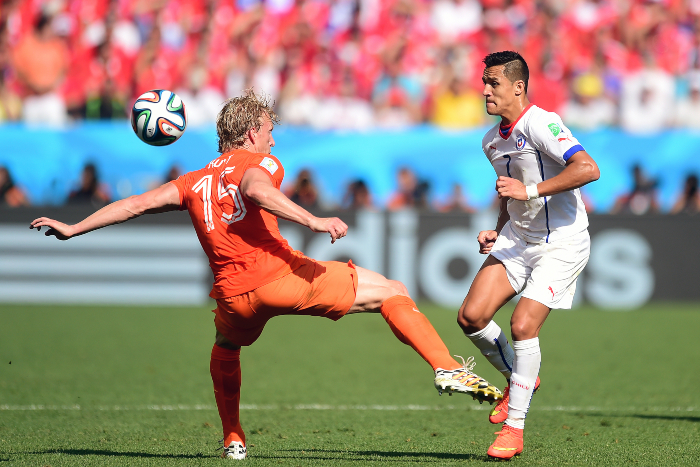 During the match, Twitter was filled with confused fans who, after years of watching him play up front or out wide at Liverpool, were now witnessing him smash it at left-back.

“I think it went very well, and hopefully I will get another chance,” he said after the match. Van Gaal thought the same, and so Kuyt was set to become the seventh Dutchman to hit 100 caps.

The feat was confirmed when he was named in the starting XI for the first knockout game against Mexico. Being game number 100, and also falling on the anniversary of his father’s death, it would prove to be one of the most significant matches of his career.

It was one of the hottest days of the tournament, with temperatures of 38’c. Half of the pitch was covered in shade, but not Kuyt’s side. Most 33-year-olds would struggle in such extreme conditions, but not him. He never stopped running up and down the left flank, staying defensively solid while also providing a threat going forward.

With the teams swapping sides for the second half, he moved over to the cooler side of the pitch. For about 10 minutes.

His nation was 1-0 down and struggling so, in the 55th minute, Van Gaal opted to switch to a 4-3-3. As part of the change, Kuyt went over to play right-back in a back four. Back to the sunny side, it was. 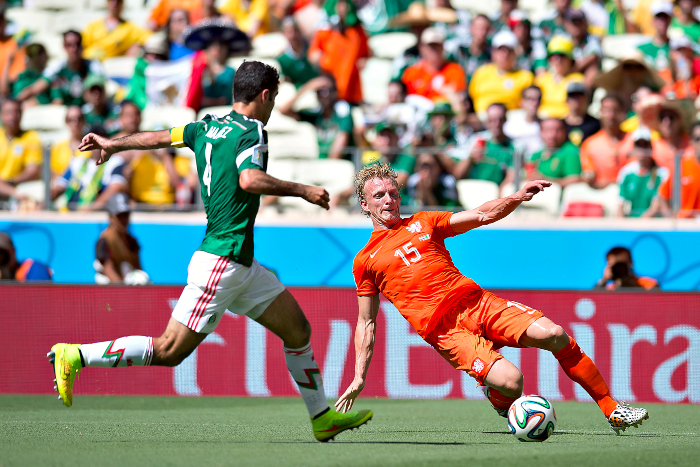 With Arjen Robben offering no defensive support but the Dutch needing a goal, Kuyt had to contribute at both ends. A newcomer would have thought he’d been a marauding full-back for his entire career, not a matter of minutes.

Still Mexico stood strong. With 15 minutes left, Van Gaal made another tactical change. Channelling his inner Big Sam, he instructed his side to play 4-4-2 and a sh*tload of long balls. Kuyt’s role was now target man, challenged with winning as many of them as possible.

He obliged, and when the Netherlands finally equalised, he was the one to win the corner that Wesley Sneijder scored from.

With the scores level again, Kuyt was moved back to right-back. We’re going to wager that no other player has ever gone from LWB to RB to ST to RB in the space of about half an hour.

He largely stayed back in injury time, giving Robben the freedom to cause carnage and win a penalty, which Klaas-Jan Huntelaar converted.

When the full-time whistle went two minutes later, he fell to the floor with his head in his hands, overcome with emotion. Seven years to the day since his dad died, he had become a centurion for his country and put in one of the most remarkable World Cup performances we’ve seen.

So remarkable was it that he was singled out in the dressing room afterwards. He even received praise from the godfather of Dutch football himself, Johan Cruyff.

“You’re blessed as a team when you have someone like him walking around. With Kuyt, you can, at a tactical level, go in all directions.”

Given how notoriously difficult Cruyff was to please, this was high praise indeed.

Living up to the nickname

Arguably Kuyt’s best virtues are his versatility and his work rate. The game against Mexico was a glorious display of the former, and the following two would be for the latter. He’s known by so many fans as Mr Duracell for a reason.

First up was Costa Rica, and once again Kuyt found himself in a new position, starting at right-wing-back this time. With the opposition sitting back, his main job was to make an impact in the final third. He did, and would have bagged an assist early on if not for the heroics of Keylor Navas in Costa Rica’s goal.

These heroics continued throughout the match, with the keeper making save after save. Thanks almost entirely to him, the scores remained at 0-0 after 90 minutes.

As the match approached the two-hour mark and the dreaded penalty shoot-out, various players succumbed to cramp and sheer exhaustion. Kuyt, however, comfortably the oldest player on the pitch, just kept on running.

In the shoot-out that followed, he stepped up and buried his penalty emphatically, putting the Netherlands on the verge of the last four. Never in doubt.

When Tim Krul saved Costa Rica’s following attempt to secure their spot, Kuyt was the first one to embrace him, outpacing his considerably younger team-mates.

Once the semi-final places were all confirmed, he was the second-oldest outfield player left in the tournament, behind only Miroslav Klose, who had played and ran far less.

Given all this, logic would suggest he’d be one of the prime candidates to be subbed off when the Dutch were yet again taken to extra time, this time by Argentina. Pfft, in Dirk’s world, age is but a number and fatigue is a social construct he doesn’t believe in.

Instead, he looked one of the fittest players on the pitch. He was also heavily involved, both at LWB and RWB, taking the second-most touches of anyone.

When he walked up to take his second shoot-out penalty in two games, he knew that if he missed, the Dutch would crash out and he’d be the one responsible. Lesser men would have collapsed under such pressure, but not him. With nerves of steel, he buried it and gave Jasper Cillessen one last chance to save the day, which he couldn’t take.

Argentina headed to the final, and Kuyt to the third place-off, in which he played the full 90 minutes of as the Netherlands won 3-0. It proved to be his international swan-song, as he never played a competitive match for his country again. Personally, we think it was the perfect ending.

In his final weeks in orange, he hadn’t scored a goal, lifted a trophy or bowed out with a stadium chanting his name. Instead, he’d occupied four positions and played over 500 minutes of football in four games, displaying the qualities that had earned him over 100 caps, two World Cup medals and the love of fans all around the world. Yeah, not too bad.

The last goodbye: When Dirk Kuyt banged them in for Feyenoord at 35