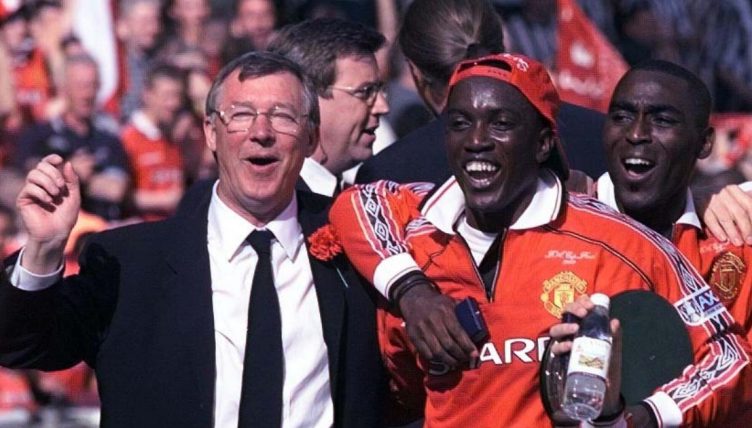 Dwight Yorke enjoyed a brilliant career, tearing up the Premier League with Aston Villa, winning the treble with Manchester United and playing until he was 37. And he did it all despite being labelled a playboy.

Everybody knows what former Aston Villa manager John Gregory said about Dwight Yorke in the summer of 1998.

Having recently lost his star striker to Manchester United for £12.6million, Gregory confessed to some dark thoughts.

“Dwight openly stated to me that he wanted to play for Manchester United and not Aston Villa,” he said. “That really hurt me, and if I had a gun I would have shot him.”

But Yorke would receive further threats — less well-documented ones — over the course of his four-year Manchester United career. 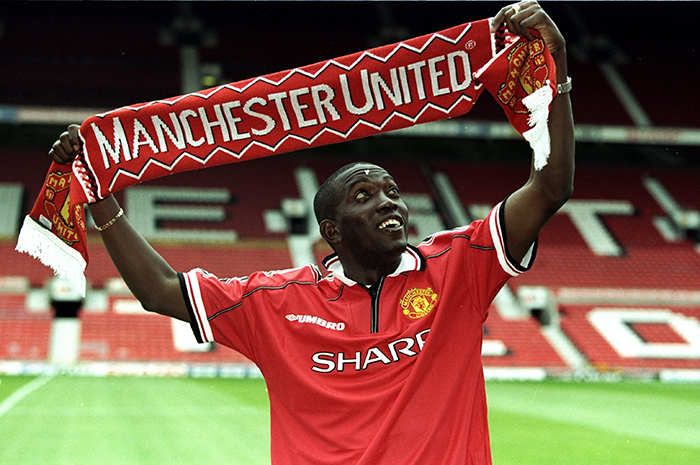 In the early 2000s, around the time of Eminem’s stalker anthem ‘Stan’, the anonymous owner of dwight-yorke.co.uk carried out some mild blackmail against the striker.

“I wrote to Dwight Yorke a few months ago asking if he would be interested in buying this domain name,” they wrote. “I also offered to write a fan site for him at no cost. All I asked was for a small mention in the Manchester United matchday programme.”

A fair offer, and no mention of guns. Here was an opportunist simply seeking a small favour from an idol.

But Yorke never replied to the troubled fan.

“Now I imagine Dwighty boy must be quite busy with his life,” the angry webmaster wrote. “But he couldn’t even be bothered to send a short reply saying that he wasn’t insterested [sic] and for me to stick it.” 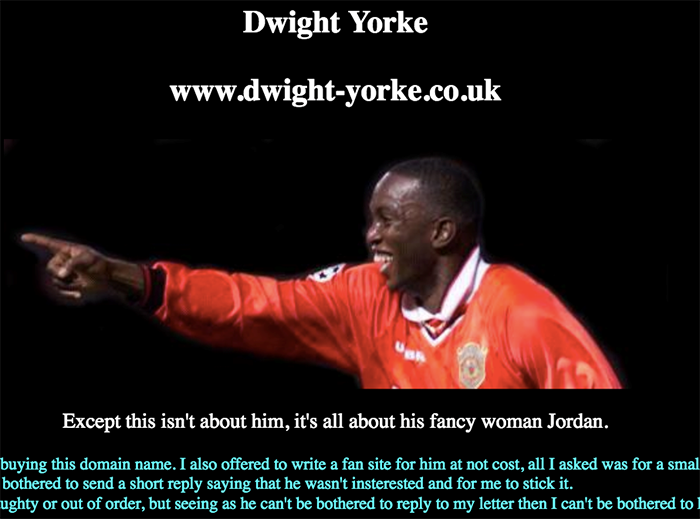 To reiterate: ‘Stan’ had just come out.

Weirdly, the webmaster’s revenge against Yorke involved posting photos of Katie Price, as well as links to her work, on dwight-yorke.co.uk. (Yorke and Price were dating at the time.)

Although it’s hard to see how this would have troubled Yorke, it was clearly an attempt to shame the footballer.

The aggressor even vowed to keep up the fight: “Everytime [sic] he changes a girlfriend, this site will change with him as well! A bit like a shadow you could say.”

Back in 1998, Yorke was leaving defenders chasing shadows, you could say, after forming a deadly strike partnership with Andy Cole.

For three years the duo, born less than three weeks apart, exploited the final throes of the 4-4-2 era.

Strangely, though, that partnership might never have bloomed had United signed their first-choice forward. Not Yorke, but Patrick Kluivert of Milan.

Kluivert flourished at Barcelona in the late 90s and early 2000s, but Yorke quickly proved that he was no meagre backup, scoring seven league goals before Christmas 1998 and endearing himself to fans.

By the time United faced Aston Villa in early December, Yorke was even praised by his jilted former boss.

“[Wanting to shoot Yorke] was just how I felt at the time,” Gregory said. “I was hurt that he didn’t want to play for Villa, though I still have the utmost admiration for him as a player.”

Yorke finished United’s treble-winning season of 1998-99 with 29 goals in all competitions, his 18 league strikes earning him the Premier League Golden Boot and Player of the Season.

The following year his league tally increased to 20. And while his playing time was limited in his third campaign at Old Trafford, a 21-minute hat-trick in a 6-1 win over Arsenal helped the team to their third consecutive title.

In many ways, however, Yorke’s off-field actions came to overshadow his football.

Like his team-mate David Beckham, Yorke incurred the wrath of Alex Ferguson for his celebrity lifestyle and high-profile romantic life.

And the relationship between player and manager eventually reached breaking point.

In the 2001-02 season, Yorke’s fourth and final in Manchester, Ferguson reportedly pressured the United board to sell Yorke ahead of Cole, with both now second-choice to Ruud van Nistelrooy.

By the end of the campaign, the club had sold both halves of the legendary partnership to Blackburn.

In what now seems like an anachronism, Yorke’s final goal for United actually came playing up front alongside Van Nistelrooy, the neat header against Leicester his only league goal of the 2001-02 season.

To his credit, Yorke was never remotely secretive about how he chose to live his life. In his delightfully named autobiography, Born to Score, the striker candidly recounts tryst upon tryst.

One encounter, described in the book in all its teen movie glory, involved Yorke hiding from a partner’s mother: “There was nothing for it but to scramble together my discarded clothes and dive under the bed while my friend played for time…”

Importantly, though, hindsight tells us those off-field activities didn’t hamper Yorke’s career as much as Ferguson thought they might.

While Yorke’s friend Mark Bosnich, a team-mate at both Aston Villa and Man United, lost a decade of his career to a troublesome party lifestyle, Yorke played at the highest level well into his thirties, eventually transforming himself into a central midfielder. 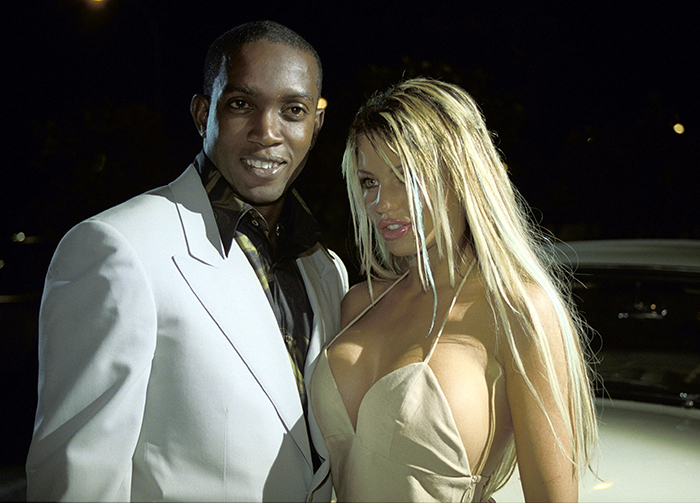 One of his greatest achievements — captaining Trinidad and Tobago at their first ever World Cup — was saved until he was 34 years old, and he didn’t retire from club or international football until the age of 37.

So while the early 2000s saw Yorke vilified for a lack of dedication and professionalism, time has actually been kind to his legacy.

Doubters assumed the ‘Jordan years’ would destroy Yorke as a footballer. Perhaps the drama took its toll in other ways, but the longevity of Yorke’s career proved he was capable of balancing two simultaneous and equally colourful lives.

And perhaps that’s where the owner of dwight-yorke.co.uk went wrong.

That anonymous ‘Stan’ figure thought public scrutiny could kill the Smiling Assassin (or at least coerce him into writing a small note of thanks in a matchday programme), but Yorke actually thrived as a celebrity.

If only others had spotted his resilience, he might have lasted far longer at Man United — perhaps until the age of 37.