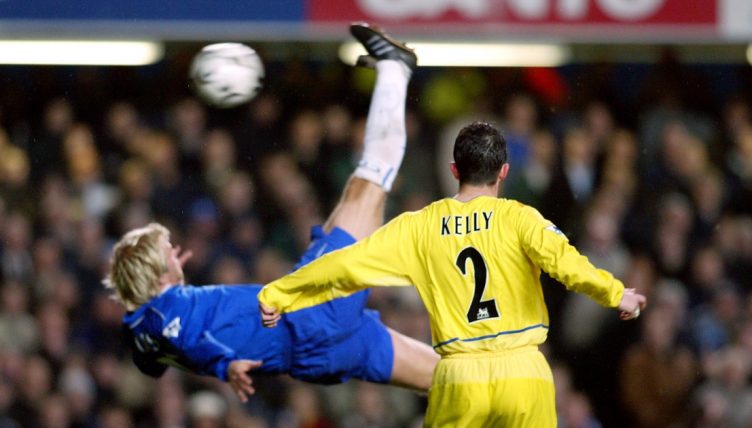 Eidur Gudjohnsen played alongside both Ronaldo and Lionel Messi, and played under both Jose Mourinho and Pep Guardiola for Chelsea and Barcelona. He’s the closest thing football has to Forrest Gump.

Gudjohnsen might not have been the most prolific of scorers in big European games – the Icelander scored just three knockout goals in the competition – but he delivered in a huge way domestically.

He scored 75 goals in his first five years at Chelsea alone, but one of them stands out above all others.

It came in January 2003 against Leeds United and is a perfect demonstration of why, as big-money signings tried and failed to make their mark at Stamford Bridge, Gudjohnsen outlasted those with far bigger names and price tags than himself.

The goal is a work of art, for a blend of guile and relaxation which feels in direct contract to Frank Lampard’s instinctive run and cross.

While other bicycle kicks involve visible agility, Gudjohnsen’s effort sees him adopt the look of a man who has lived his entire life horizontally.

While others accelerate into their bicycle kicks, he does the opposite, as if hitting the brake and coming to a controlled stop.

It’s the unlikely calm of a man who both knows what’s expected of him within any individual set-up and is comfortable with his overall standing in the game.

Put simply, it shows you don’t need to be the best player in the world to have unerring faith in your own talent.

To anyone not familiar with football, Gudjohnsen surely looked like a leading man. He had (and has) the look of a man who feels like he belongs not only on highlight reels but also on postcards and stamps, yet as a footballer he was only too happy to surround himself with more headline-grabbing colleagues.

Few have played with both Ronaldo and Messi in full-flight, but Gudjohnsen can claim that accolade – the Brazilian Ronaldo, that is, a team-mate of a young Eidur at PSV.

Few have played under both Jose Mourinho and Pep Guardiola to boot, but Gudjohnsen went one further than that: he scored the winning goal in both managers’ maiden home league victories during their most celebrated managerial spells.

Mourinho’s record-breaking debut season at Chelsea might not have begun with four straight wins were it not for Gudjohnsen’s bravery, the forward forcing the ball over the line for the only goal of the game against Manchester United.

And then, four years on, with Guardiola at risk of taking just five points from his first four La Liga games, Gudjohnsen was on hand to turn in a Dani Alves cross on the stretch.

Barcelona would go on to win 17 of their next 18 games in the league and end the season with every trophy going.

In the Oscar-winning film Forrest Gump, the titular character is present across a variety of historical events, from the growth of the Black Panthers to the Watergate Scandal.

If you’re looking for a sporting equivalent, it’s either (a) far-fetched or (b) Eidur Gudjohnsen’s career.

Footballers don’t find themselves in successful sides by accident, and they certainly don’t do so over and over again without having something about them.

If Forrest’s young Elvis was Eidur’s young Ronaldo, the footballer almost has more names and more moments to tick off later in his career.

More than 20 years passed between his first PSV goal and his last for Iceland in a Euro 2016 warm-up, but he managed to fit plenty in during those two decades.

A list of attacking talents to play alongside Gudjohnsen is as strong a roll call as you’ll ever see: Ronaldo, Gianfranco Zola, Jimmy Floyd Hasselbaink, Hernan Crespo, Didier Drogba, Samuel Eto’o, Ronaldinho, Lionel Messi, Thierry Henry and more. If we hadn’t witnessed it with our own eyes then we wouldn’t believe it.

You could never accuse him of just making up the numbers, either – he scored crucial goals in several countries, not least this opener, which set the tone for a breathless Champions League game for Chelsea against his future employers Barcelona.

Ronaldinho’s goal later in the same game might have stuck with us longer, but Gudjohnsen’s strike was what set up the one-two-three punch to help Mourinho’s team past their opponents.

And again, as with that bicycle kick against Leeds, it was an example of calm and level-headedness while everything and everyone around him was moving a mile a minute.

It’s this track-record which makes his one high-profile lapse all the more heartbreaking.

During Chelsea and Liverpool’s infamous ‘Ghost Goal’ game, with the seconds ticking down, Gudjohnsen would surely have been Mourinho’s first-choice to deliver calm under pressure.

His rash swing at the ball, a display of power over precision or a premature celebration getting in the way of a measured finish, was almost emphatic in its uncharacteristic nature.

When he looks back on his career, Gudjohnsen might still play that moment over in his head, but he has plenty of positives to distract from that one miss.

Indeed, with the exception of a very select few, it’s tough to think of anyone who can fall back on more.