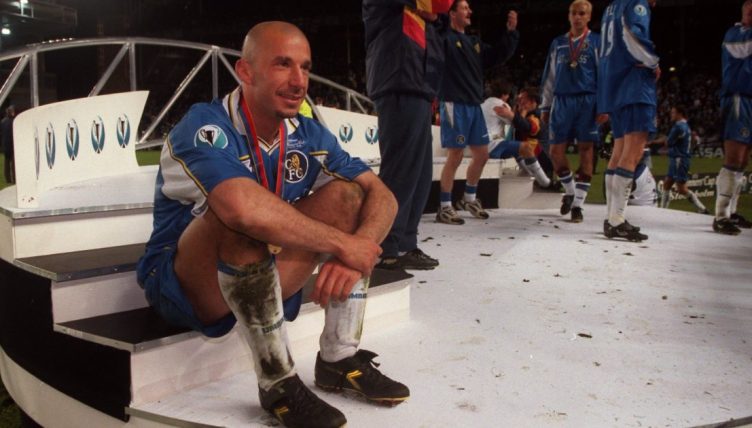 On a February evening in 1998, Ruud Gullit flicked on the television, pressed the Teletext button and there it was, the news nobody – not even he – expected. Gullit had been sacked as Chelsea’s player-manager just nine months after winning the club’s first major trophy for 26 years.

He had had no prior warning, no reason given – not yet at least. And just a few hours later, his replacement was revealed. As if the story was not sensational enough, the man to fill his spot was one of his players, Gianluca Vialli.

As sporting soap opera goes, this was the peak; the late-90s, west London football equivalent of EastEnders’ big reveal of Phil Mitchell’s shooter.

It must have felt like a knife in the back for Gullit. Yet for Chelsea, it was a decision that ultimately paid off, another turning point in a successful era that is now inextricably linked with an elegant, shiny-headed, larger-than-life Italian attacker-cum-coach.

Vialli had arrived at the club in the summer of 1996 on a free transfer. He was quite the coup. He had lifted the European Cup as captain of Juventus just a few weeks before signing – a footballing aristocrat both figuratively and literally having grown up in a 60-room castle.

Yet here he was at Stamford Bridge, at a Chelsea that was nowhere near the Chelsea of today, getting on board with the Premier League’s foreign revolution.

Gullit, who signed Vialli, had just been appointed player-manager and the team was to feature Dan Petrescu, Gianfranco Zola, Roberto Di Matteo and Frank Leboeuf. It was exciting and continental, bubbly Prosecco football to replace the chips-and-gravy stuff that had gone before.

That season, Chelsea won the FA Cup, with Di Matteo’s famous strike giving the Blues the edge over the Middlesbrough of Juninho and Ravanelli. But for Vialli personally, it was a campaign of more downs than ups.

He had scored a brilliant winner away at Old Trafford and two goals in a thrilling fourth round FA Cup tie with Liverpool. Chelsea fans had taken to him immediately and sang his song to the tune of ‘That’s Amore’. But for much of the season, Vialli was embroiled in a feud with Gullit that often saw him on the bench with Mark Hughes and Zola preferred in attack.

The next season, things started well, with Vialli scoring four in an away game at Barnsley, after which his manager paid him a backhanded compliment. “He looked fitter and sharper,” said Gullit, “and he’s given up smoking.” Vialli also buttressed terrace hero status with a leader’s display against Tromso in the Cup Winners’ Cup, scoring two away goals in a Norwegian blizzard and a hat-trick at home as Chelsea went through 9-3 on aggregate.

A @90sfootball classic in the #snow. Chelsea trailing 3-1 at Tromso in the 1997 Cup Winners' Cup then Gianluca Vialli does this in the last minute… pic.twitter.com/HfETfbLpmV

The Vialli-Gullit relationship was still strained, however, and in the book Blue Day, Vialli is quoted as saying: “I was playing more, but I was frustrated with the rotation system which didn’t really make sense. I was thinking of maybe leaving. My friend Atillio Lombardo was at Crystal Palace and I thought about them, but also Celtic and Glasgow Rangers.”

He stuck it out though and soon things began to stir in the background. Gullit’s contract was set to expire at the end of the season and, according to Chelsea director Colin Hutchinson, he had gone to the club asking for a salary of £3.3million for the following term, a claim Gullit later denied.

Whatever the case, Chelsea were looking for a new man. Vialli was approached by an agent, asking if he would consider taking over at the end of the campaign. “That was interesting,” he later said. Of course it was. And his interest was the nail in Gullit’s Chelsea coffin.

Days later – with Chelsea second in the league, and into the quarter-finals of the Cup Winners’ Cup and semis of the League Cup – the Dutchman was gone, Vialli already lined up as his replacement. The drama was intense – but Vialli’s decision to say had paid off and over the coming two years, he established himself not as a bit-part player but as a pivotal figure in the club’s recent history.

His first game in charge was a sign of what was to come, both in terms of managerial style and result. Chelsea had lost to Arsenal in the first leg of their League Cup semi by then, going down 2-1 at Highbury. In the second game, they needed a serious fillip.

Vialli’s answer? In the dressing room before the game, he popped open a couple of bottles of champagne and handed a glass to each of the players. Vialli started himself in a front three alongside Hughes and Zola and Chelsea turned in a grand cru performance, putting three past the Gunners in the opening hour. When Vialli subbed himself off with 10 minutes to go, it was to a standing ovation. 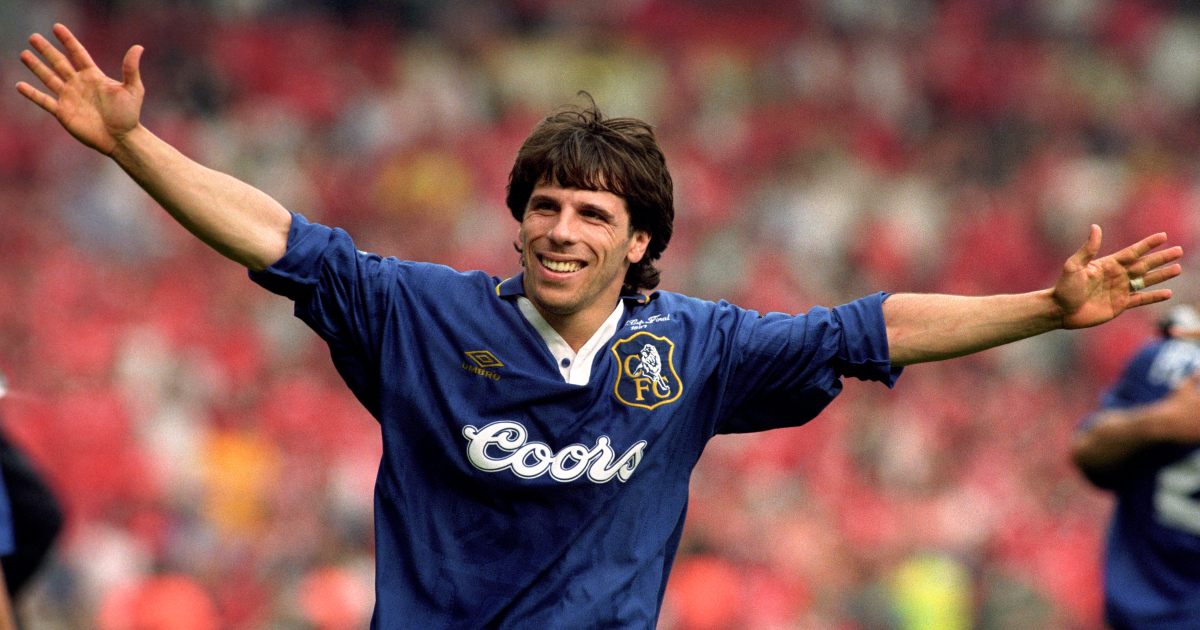 READ: Ranking the 13 Italians to have played for Chelsea in the Premier League

In the following weeks, Chelsea’s league form was poor. But it was the cups that were the focus. First came the Cup Winners’ Cup quarters, and Vialli’s side obliterated Real Betis 5-2 on aggregate, with Vialli taking a seat on the bench for both legs.

In the League Cup final that followed he did the same, not even coming on as a sub. Showing that he was happy to put the team before himself was clearly a popular tactic as Di Matteo battered in an early piledriver to set up a 2-1 victory. Chelsea went on to lift the Cup Winners’ Cup in May, defeating Vicenza in the semis and Stuttgart in the final with a Gianfranco Zola goal in Stockholm.

The next campaign proved to be Vialli’s last as a player and brought another piece of silverware, the UEFA Super Cup against Real Madrid right at the start. The excitement, however, kept on all the way through. Inspired by a magnificent Zola, Chelsea were involved in a genuine title fight, eventually finishing third and qualifying for the Champions League for the first time.

In Europe’s premier competition, they reached the quarter-finals and beat Barcelona 3-1 on a famous night at Stamford Bridge before going down 5-1 at the Camp Nou. Come May, Vialli secured yet another trophy for the club – another FA Cup with another Di Matteo goal.

Robbie scored our winner in the 2000 FA Cup final 19 years ago today… pic.twitter.com/8I8Aqfy5n7

His sacking after five games of the next campaign, then, came as a surprise – perhaps even more so than that of his predecessor.

They had had a poor start in the league, granted, but Vialli had led them to the Charity Shield and was at that point the most successful manager in Chelsea history. He was hugely popular among the fans, and his name continued to be sung on the terraces for months after his departure.

Talking in 2019, he revealed the circumstances of his dismissal: “I drove from the training ground to visit the board and when I arrived they asked to sit down. I was thinking of how much money to ask for, one or two million pounds.

Vialli stayed living in west London and has retained his popularity to this day, for more than just the trophies.

His time at Chelsea was an era of new influences and excitement and Vialli embodied it. He was adored for his demeanour: a class and style that was engrossing and novel, his gregariousness and the endearing attempts at using English idioms. When in 2017 it was announced that Vialli had pancreatic cancer, it was little surprise that Chelsea fans rallied around him.

It is also worth contemplating whether the post-Vialli era at Chelsea would have been quite the same without him. In this century, Chelsea have gone on, with considerable financial assistance, to become a European superclub. But would Roman Abramovich have even considered the Blues had Vialli not brought the good times back to the Bridge?

It is a hypothetical and we will never know, but Vialli’s impact should not be understated.