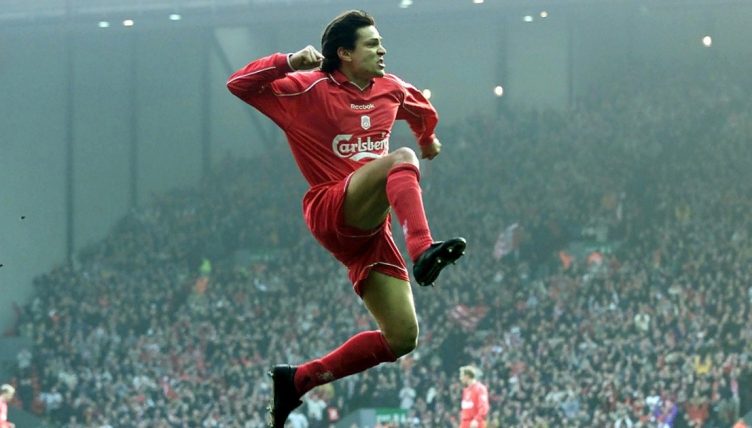 Jari Litmanen was cursed with injuries yet still managed to play football across four decades. As Ajax and Liverpool fans can attest, his long and storied career was far from wasted.

Packing your greatest achievements into the early stages of your career isn’t necessarily a bad thing.

For Finnish football legend Jari Litmanen, doing so was something of a necessity, as injuries did their best to contain his unique talents.

But what achievements they were.

At the age of 24, Litmanen won the Champions League with Ajax, playing in Louis van Gaal’s legendary side with the likes of Clarence Seedorf, Edgar Davids and Patrick Kluivert.

That win was supplemented with four Eredivisie titles in seven years.

After Ajax, Litmanen did a lot of toing and froing, but after becoming Finland’s most capped player and record goalscorer (and playing until the age of 40), he enjoyed a career well worth celebrating, not regretting.

Litmanen began his career in his native Finland, playing for three clubs, Reipas, HJK and MyPa, between 1987 and 1992.

In July 1992, a delightful scooped goal for MyPa in the Finnish Cup final caught the attention of Ajax scout Ton Pronk. (Had he somehow missed the finish, he could hardly have avoided Litmanen’s wild topless celebrations.)

With Pronk suitably impressed and Van Gaal eventually convinced, Litmanen moved to Ajax at the age of 21, where he soon got the chance to fill some very big boots: those of the departing Dennis Bergkamp.

The chance was seized with both hands — or both feet, perhaps, as Litmanen proved capable with left and right boot alike.

Across seven seasons in Amsterdam, he scored 91 goals in 159 league appearances, winning the Eredivisie in four of his seven seasons.

And despite playing as a second striker in most games, Litmanen could find the net with ease.  In the 1993-94 season, he bagged 26 league goals — a career high.

But it was in European competition where Litmanen truly made a name for himself.

The memorable 1995 Champions League victory against Milan was almost followed by another the following season, only for Ajax to be beaten on penalties by Juventus. Litmanen’s nine goals made him top scorer in Europe that year.

Even in his 20s, however, the forward’s injury proneness was noticeable, as he missed more than a quarter of possible fixtures during his first Ajax spell.

Van Gaal moved to Barcelona in 1997, and two years after his appointment signed Litmanen for his new side.

The move didn’t work out.

Although Litmanen showed flashes of his talent, he found the net just three times over the 1999-00 season, and would be frozen out the following year as Rivaldo took over creative duties.

However, despite being out of action for a long period, the Finnish attacker was snapped up by Gerard Houllier’s Liverpool in January 2001, with the French manager calling him a “world-class player” with a “massive reputation”.

So massive was that reputation, Houllier had to reassure Robbie Fowler — who was currently playing with a cut and bruised face after a nightclub altercation — that his place was not under threat from the new signing.

“It has always been my dream to play for Liverpool,” Litmanen said. “I have supported them since I was a child.”

Although that personal attachment to the club didn’t lead to brilliant success or form, Litmanen played a part in Liverpool’s treble-winning campaign of 2000-01, fitting into the side better than he had at Barcelona.

He left in the summer of 2002 with many fans wondering what might have been — and whether they could have given him more time to find his feet.

Return to Ajax and later years

After Liverpool, Litmanen returned to Ajax, where he was welcomed with open arms. At 31, however, the player was still struggling with fitness, and would find his playing time limited as a result.

The Finn would score five goals in 14 appearances during the 2002-03 season, and though he was able to depart Amsterdam with another Eredivisie winners medal, his fifth overall, he only featured for 148 league minutes in 2003-04.

One of very few players who could give Mark Hughes a decent game of Headers and Volleys…pic.twitter.com/HrVOj441Wa

That injury-hit season suggested Litmanen’s career was winding down, but the so-called ‘Man of Glass’ dug in his heels to keep playing.

Between 2004 and 2007, Litmanen played for Lahti in Finland, Hansa Rostock in Germany and Malmö FF in Sweden, picking up ever more caps for the Finnish national side in the meantime.

Injuries still stalked him with a menace: at Malmö, Litmanen fell down some stairs while carrying a glass of milk.

His next career move came out of nowhere. In 2008, at the age of 36, he made a surprise return to England with Fulham.

“I don’t think there is a need to explain the qualities that Jari possesses as a player or the obvious reasons for wanting to bring him to Fulham,” said manager Roy Hodgson, who been coaching Finland the previous year.

Unfortunately, Litmanen suffered heart palpitations in training, returned to Finland to rest, and never made an appearance for Hodgson’s side.

But despite the serious medical setback, Litmanen — Finnish — was hardly finished.

The attacker returned to Lahti, where he scored 10 goals between 2008 and 2010, and ended his domestic career at HJK, a club for whom he had last played in 1991.

Litmanen’s international career was just as remarkable and extensive as his domestic one.

In November 2010, at the age of 39, the forward scored a penalty for Finland in an 8-0 hammering of San Marino, becoming Finland’s oldest ever goalscorer.

He retired with 137 caps and 32 international goals — each a Finnish record.

Many fans will wish they had seen more of Litmanen over those four decades of football, but his legacy as a European football legend is fully secured.