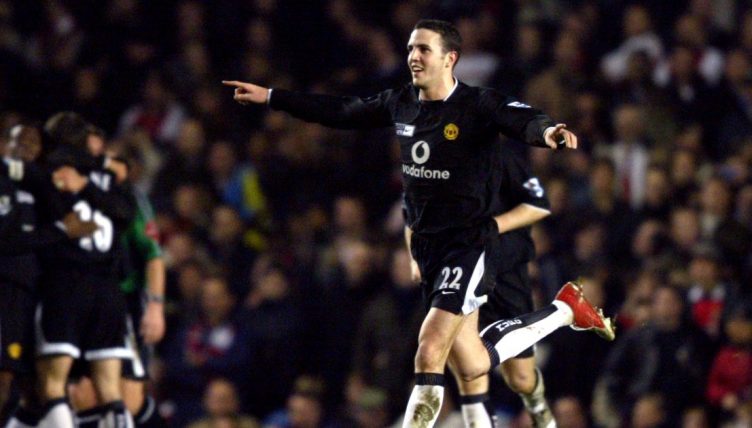 John O’Shea’s best moments for Manchester United were often as funny as they were impressive. Can that be considered a good thing?

It’s hard to imagine life as a professional footballer. Among other things, it’s hard to imagine the immense pressure on match day – fans singing your name when you play well but jeering when you struggle, muttering threats as you shin the ball out of play for the second time that afternoon.

It’s equally hard to imagine the intense public scrutiny, where even a walk to the supermarket can be made troublesome by autograph hunters and paparazzi.

And then there’s the money – the huge wealth accrued by even the most ordinary-seeming players. What would you even do with it?

But imagine being a professional footballer like John O’Shea. Imagine, after years of hard work, thousands of hours on the training pitch, sweating buckets to reach your potential, finally forcing your way into an early-2000s Manchester United team, a team full of genuine superstars.

Imagine the thrill of making your first overlapping run beyond Ryan Giggs or David Beckham. Imagine living the dream like John O’Shea did.

And then imagine, in a fiercely fought match against Arsenal, scoring a goal of sublime beauty – a delicate chip that Eric Cantona would have been proud of.

Imagine scoring that kind of goal, a goal of the season contender in a tightly contested grudge match and, instead of being lauded for your genius, having the goal sort of laughed at.

O’Shea’s unexpected wonder goal against Arsenal, which dropped into the corner of Manuel Almunia’s net on the evening of February 1, 2005, has become the Irishman’s defining moment.

Never mind his five Premier League winners medals, Champions League victory or 118 caps for his country. O’Shea’s audacious chip – and subsequent look of genuine surprise – will be etched upon his gravestone. It’s barely relevant that United won nothing that season.

But it’s also important to recognise that O’Shea’s wonder goal isn’t remembered solely because of its technical brilliance or even its timing.

Confusingly, for both O’Shea and everyone else, the goal has become iconic because the Irish defender was mostly a bit rubbish.

Not a liability, not a bottler, certainly not an under-performer, but just a bit rubbish. A player with a very limited skill set, especially for someone at an elite club. A player whose most significant attribute was a willingness to say “Yeah, I’ll give it a go” when Alex Ferguson told him to play in goal, in midfield or up front. A player who once took a shot that went backwards.

It’s hard to imagine what that must feel like. To be simultaneously a legend and a butt of a joke. To hear your fans say “Yes! brilliant! John O’Shea scored!” and also “Nice one, Arsenal, even John O’Shea scored.”

How do you process those two things at once? How do you live life as John O’Shea?

Although O’Shea’s Arsenal goal sticks out in the memory, it wasn’t his only big moment in a United shirt.

In 2003, as his side attempted to overturn a 3-1 deficit against Real Madrid, the defender nutmegged Luis Figo.

Just last year, the Portuguese legend pretended to have forgotten it. “I’m not too good with remembering that kind of stuff, but if he was happy, I’m happy,” he lied.

During the 2006-07 season, O’Shea provided another memorable moment by playing in goal for the dying minutes of a game against Tottenham. Not long after that, he scored a stoppage-time winner against Liverpool at Anfield.

With the possible exception of the Liverpool goal, these moments have all been immortalised for the same reason: a good thing happened, and that thing was rendered memorable, funny, bizarre, euphoric, etc. because John O’Shea – a mostly rubbish player – caused it to happen.

It’s a curious phenomenon, but one that is probably seen across most football clubs. Fans cherish memories of consistently brilliant superstars, but also of technically poor workhorses who occasionally do great things.

Players in the middle, those who are pretty good but not great, don’t get the hero worship of true superstars, nor do their nutmegs and chips automatically become cultural landmarks.

Would John O’Shea still have become an Old Trafford cult hero had he been, well, better? Would his Arsenal chip have gained the same significance? Such questions must keep him up at night.

As humans – professional footballers or otherwise – we don’t like to think of ourselves as figures of fun.

We like to be respected or admired. We would rather our achievements be praised on objective grounds, not because it’s surprising or amusing that we’ve finally done something well.

We want to be taken seriously in our professional lives, not given a patronising pat on the head when we hand in a report or replace a tire. We want to be the Paul Scholes of accounting or the Rio Ferdinand of carpentry, not the John O’Shea of middle management.

But while nobody dreams of being a John O’Shea, there is much to admire about the utility man. Through hard work and dedication, he became an important squad player in a very successful team. Today, many technically superior footballers would eye his trophy cabinet with envy.

Certainly, O’Shea was not always the most respected member of the team, and some fans were disappointed that he did not end up a better player. After all, during his Figo-megging early days, the academy graduate looked every bit the next Denis Irwin.

In the end, however, O’Shea’s successes – and limitations – have made him a curious kind of cult hero.

Yes, his best goal will make you laugh, not gasp with amazement. But just look at the incredulity on his face as that chip goes in. See him struggle to choose between Cantona-like indifference or Giggsian joy, and then proceed to do both, in turn.

Look at his face and it’s obvious that O’Shea, as much as anyone, is in on the joke.