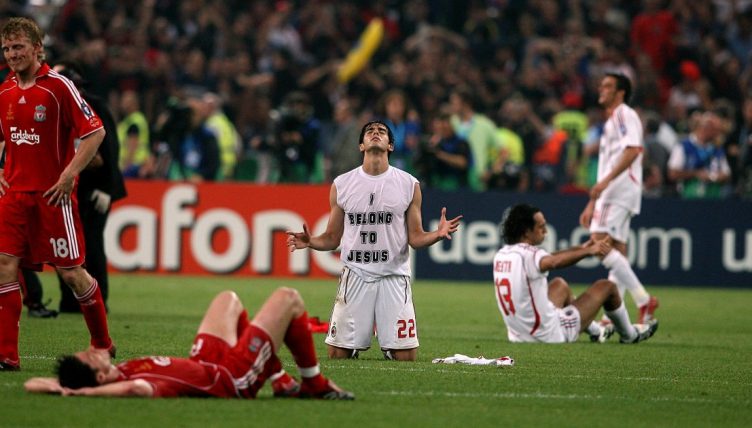 Reaching his peak on the brink of the Messi-Ronaldo era, Kaka occupies a unique place in football history. We shouldn’t forget his incredible talent.

For a brief period of time, Kaka was, without doubt, the best footballer in the world.

The Brazil playmaker was recognised as such at the 2007 Ballon d’Or ceremony, beating Cristiano Ronaldo and Lionel Messi — two players who would dominate the awards for the next decade — by a huge margin.

It was hard to keep up with Kaka’s many achievements that year.

With AC Milan, he won the 2006-07 Champions League, the 2007 Super Cup and the 2007 Club World Cup. That Milan side boasted some great players, but Kaka was their heartbeat, their driving force.

As well as scooping virtually every ‘footballer of the year’ contest in existence, the playmaker’s 10 European goals – including that one against Manchester United – also made him the Champions League’s top scorer.

At the Ballon d’Or ceremony, fellow Brazilian Pele explained why Kaka’s achievements dwarfed those of Messi and Ronaldo.

“Kaka has been playing at this level for Brazil for four years now,” Pele said. “He helps out in midfield and he is also a great example off the pitch. He is the complete player.”

Kaka was also something of a dying breed. An all-action No.10, the Brazilian was a central attacking midfielder who consistently scored and provided goals for his team.

Where goalscoring wide forwards have since dominated the Ballon d’Or, Kaka usually played through the middle, using his pace and skill to move the ball from midfield to attack, usually with the desired consequences.

Zinedine Zidane called him a “rare piece of talent”.

And yet, if one views Kaka’s achievements through a hypercritical lens, one could see him as something of a nearly man.

Outside of the landmark 2006-07 season, Kaka’s three biggest trophies are: one Serie A title with Milan, one La Liga title with Real Madrid — for whom he played a minor role — and the 2002 World Cup with Brazil. He played just 18 minutes at that tournament.

Nor is the playmaker’s reputation aided by historical context.

In reaching the peak of his powers shortly before the dominance of Messi and Ronaldo, Kaka can be considered something akin to the Sega Dreamcast of footballers: a much-hyped product that was the best in its category for a fleeting moment but which soon appeared inferior and overpriced relative to the competition.

Kaka offered bright colours, but Messi and Ronaldo — obviously the Playstation 2 and Xbox in this analogy — would soon be rendering polygons in unprecedented quantities. 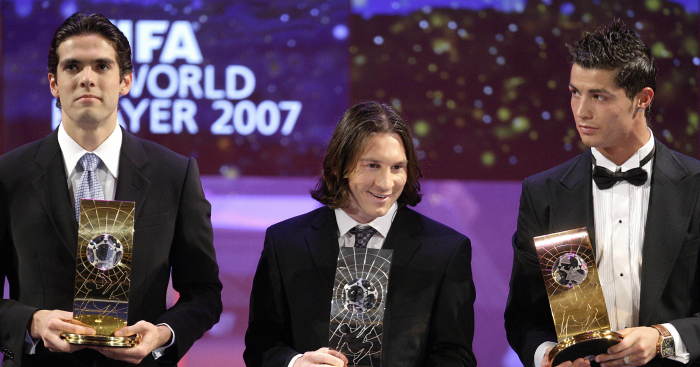 READ: Revisiting the FIFA World Player of the Year nominees from 2007

Not that the Brazilian didn’t play some part in relinquishing his throne.

A couple of years after winning the Ballon d’Or, Kaka was still near the top of his game. He had suffered a handful of injuries, but his domestic goalscoring record had improved in the 2007-08 season and his 2008-09 had started equally well.

In January 2009, some wild news came out of the blue: Kaka’s form was to make him the world’s first nine-figure footballer. Manchester City had tabled a record bid of around £100million, and Milan could not refuse.

The deal that never was

Of course, Kaka never made it to Manchester. The move broke down in late January, and Kaka was famously photographed brandishing a Milan jersey from an upstairs window of his house.

City could not convince the Brazilian to sign on the dotted line — not with wages of £500,000 per week, nor with the chance to work under Mark Hughes.

“I’m a religious person and I believe the path God decides for us is not always the most logical one,” Kaka revealed.

“Milan had never considered any offer for me in the past. This time it was different and I had to think about it, but then I decided to stay. My team-mates were incredible. They all tried to tell me something and stay close to me in this period.

“I haven’t been a Manchester City player — not even for one minute.”

City woke up & put it straight on AC's toes uno.

This is when i knew MCR had changed & City were god damn serious out ere #mcfc pic.twitter.com/5ZqJNkKhVr

But what if he had been?

Although it’s hard to imagine Kaka playing alongside Richard Dunne and Stephen Ireland, it’s even harder to argue that his subsequent career move — joining Real Madrid less than five months after rejecting Man City — worked in his favour.

After joining the Spanish giants for £55million in June 2009, a 27-year-old Kaka became the world’s most expensive footballer.

Weeks later, however, Cristiano Ronaldo smashed that record, and the celebrity status of the Portuguese quickly overshadowed that of the Brazilian.

Things went the same way on the pitch: Ronaldo became a Madrid legend, while Kaka played a bit-part role over four seasons before eventually heading back to Milan for a brief reprise of his glory days.

“My problem at Madrid was continuity first and then the coach, as I spent three years trying to convince Mourinho that I should have more opportunities,” Kaka told Marca in December 2018. “But it was his choice; it was out of my control.”

Whether Kaka’s own choices — first rejecting Man City and then signing for Madrid — may have ultimately harmed his career, it is difficult to tell.

I saw Kaka in the flesh once.

Sadly, it was not the boyish genius in the red and black of Milan, nor even the slowed but majestic figure that remained a model professional at Madrid.

It was a surprisingly stocky 34-year-old, who would have looked every bit a grizzled alcoholic if not for that unchanging, permanently buoyant mop of freshly conditioned hair. 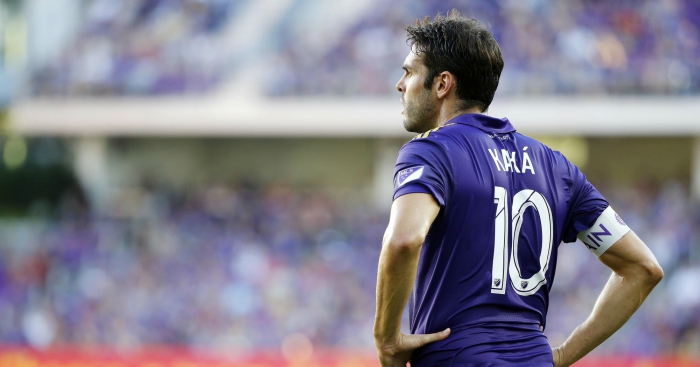 The match was in 2016, just a few months after Kaka’s final appearance for Brazil — a 2-0 win over Panama in which the one-time Ballon d’Or winner got a 10-minute run-out as a replacement for Philippe Coutinho.

That Kaka wore No.7 and Coutinho No.22 on that occasion served to highlight the respect, and perhaps sentimental attachment, that coach Dunga held for his elder playmaker.

And that seems to be how most people remember Kaka: not so much with boundless reverence — though they surely would if not for the achievements of Messi and Ronaldo — but with the utmost respect and admiration.

The famously Jesus-loving Brazilian did not play with aggression or negativity; he appeared grateful for every moment, seeming to cherish football as much as fans ended up cherishing him.

Along with his talents, it was a good recipe for popularity.

Maybe, however, Kaka was simply too happy with his lot, too quick to be thankful for everyone and everything, too happy to apply himself on the Madrid training pitch instead of seeking a move that could have revived his career.

“I belong to Jesus,” his undershirt famously proclaimed. Just imagine if he had belonged to Mark Hughes.

READ NEXT: David Beckham at AC Milan: Proving he was a footballer before a superstar