A tribute to Keisuke Honda, a free-kick maestro for club and country 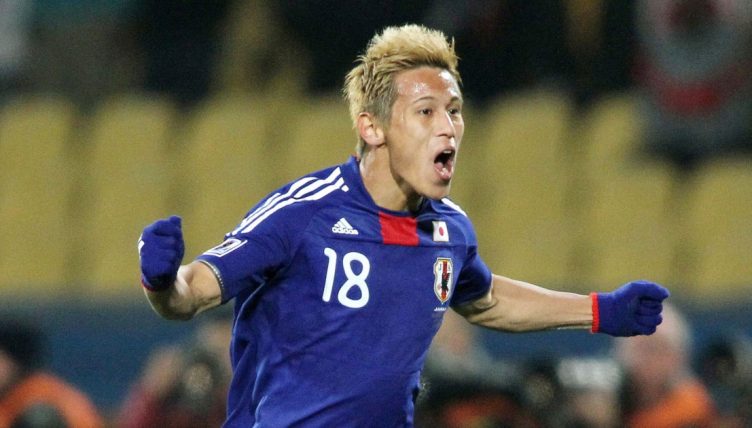 In the early part of the 21st century, we were treated to some brilliant performers from the Russian top flight.

Vagner Love and Daniel Carvalho formed a fantastic partnership at CSKA Moscow, while Portuguese star Danny had a great few years with Zenit, and Argentine striker Alejandro Dominguez burst onto the scene at Rubin.

However, perhaps the best performer of them all – or at least the one who made the most exciting contribution – was Keisuke Honda.

Honda was too young for a place in Japan’s 2006 World Cup squad which meant, unless you were an aficionado of the J1-League or one of the less notable Eredivisie clubs, your first glimpse of him would have been at CSKA.

It was then, with a continent still gripped by Juninho Pernambucano fever, that the sight of another free-kick maestro set pulses racing.

It helped that he seemed the part of course. Honda looked like the kind of man who could step out of a helicopter wearing a suit, stroll onto a snow-capped Russian pitch, and send a swerving free-kick out of the reach of any goalkeeper in the land.

One of the first examples came in the Champions League against Sevilla. On that occasion, Andres Palop did the theoretical part right, following the flight of the ball and getting in the way, but when Keisuke Honda wants to score a free-kick, Keisuke Honda scores a free-kick.

If you didn’t get your introduction to Honda then and there, you probably found out about him at that summer’s World Cup with a goal that only makes the vaguest amount of sense if you watch it really closely, and even then…

If someone showed you the start and end-points of the strike against Denmark, and the arc of the ball, you’d have laughed in their face. Watching the whole thing play out is at least enough to tell you it’s possible to score from there, but watching the ball travel from boot to goal still isn’t enough to convince you what you’ve just witnessed was real.

When even the Danish defenders are left scratching their heads, you know something special has happened.

There’s no way it should work, but somehow he makes it look as if a failure to pull it off would have been the unlikely event. It’s like picking a lock with a twiglet, or downhill skiing with dinner plates on your feet. It’s within the realms of possibility, but even that feels like a generous assessment.

Watching it back, the first thing you notice is Honda giving out detailed instructions to his team-mates, forcing them to move this way or that in apparent anticipation of anything other than the shot he delivers.

A decoy? A bluff? Not quite. As we watch the grappling off to stage left, it feels like someone has left a renaissance painting up in a gallery, allowing Honda’s free-kick to be hung alongside it. Honda is no fool – he knows the best art can get left unappreciated if it isn’t properly framed.

Had Honda been around a few years earlier, he probably wouldn’t have found himself moving to AC Milan when he did.

It’s unlikely that the Milan of three Champions League finals in five years would have found themselves making room for a flair player from the Russian league, however good he was at what he did.

At the very least, had he moved to the Rossoneri in 2004 instead of 2014, he wouldn’t have got much of a look in with Andrea Pirlo and Rino Gattuso commanding the midfield.

However, Milan’s squad towards the end of Max Allegri’s reign, and under his string of short-term successors, was often been a mess of assorted former wunderkinds in need of direction, and there have been a fair few occasions where they have needed a calming presence.

Someone to put an arm around their shoulder and tell them sometimes it really is as easy as it seems. Someone like Keisuke Honda.

At the end of the 2016-17 season, with a narrow lead over Bologna leaving Milan’s hopes of European qualification in the balance, Honda decided that wasn’t good enough. He was going to give them breathing room, and he was going to do all the work himself.

Keisuke Honda’s time at the top might have come to an end, but his career carried a wonderful amount of variety. Six different clubs in six different countries, with enough high points at each of them despite the obvious disparity in profile.

When the 2022 World Cup rolls around, it will mark the first time in 2006 that the tournament has taken place without his involvement, and it will be all the worse for that.

Over a decade on from his first World Cup goal, we’re still trying to figure out how he pulled it off, and that feels like a stronger legacy than most.

This article was originally published in June 2019.