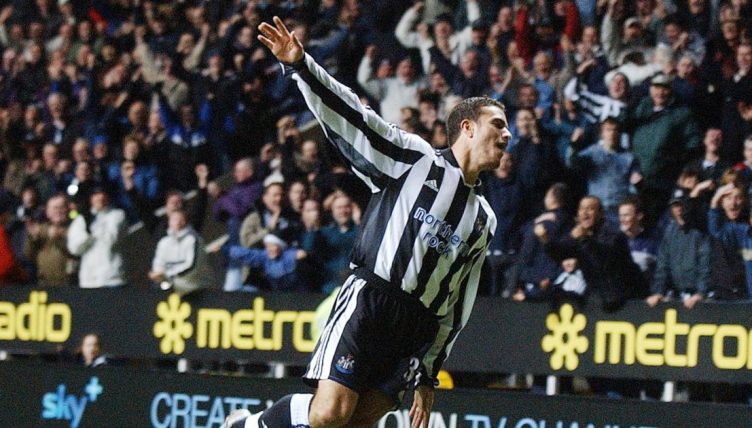 Whether your team is winning or losing, lifting trophies or barely scraping by, there’s nothing like a guy with a rocket in his boot to cheer you up.

For Newcastle United, for four seasons between 2001 and 2005, that man was Laurent Robert.

Signed from Paris Saint-Germain for a hefty £9.5million on the back of a season in which he had top-scored for the French club, a record of 32 goals in 181 appearances for the Magpies might be described as underwhelming. And it wouldn’t be entirely unfair to call him a highlights player.

But when your highlights reel is as good as Robert’s and better than plenty of players’ entire careers, frankly, who gives a shit?

He certainly didn’t take long to win over the Newcastle faithful, winning a match-turning penalty and later adding a goal of his own in a 4-1 victory at Middlesbrough in only his third game, but that was nothing compared to his first home goal.

Up against a full-strength Manchester United, with World Cup and European Championship-winning goalkeeper Fabien Barthez between the sticks, lesser players might have crumbled under the pressure of a 30-yard free-kick. Not Robert.

It was the sort of strike that leaves any keeper fumbling in mid-air, forced to determine whether it might be better to pull your arm away to leave some doubt as to whether on another day, you might have kept the ball out. With this, though, there was no one who thought the effort could have been saved.

If that ended up being the only goal Robert ever scored for the club, he’d have still achieved more than a fair few others who arrived with a high fee and a lot of pressure.

But Newcastle won that game 4-3 and would eventually finish the season in fourth place, ensuring a return to the Champions League, helped by eighth goals from Robert in his first Premier League campaign – only Craig Bellamy and Alan Shearer scored more for the Magpies in the league – and they were hardly tap-ins, either.

The pick of the bunch was another dead ball effort from similar range against Southampton, a drilled effort which left goalkeeper Paul Jones with his head and body contorted, facing forward, back and to the side, in an effort to understand whether he had dived past or even through the ball.

By the end of it all, he was none the wiser.

The following campaign was a quieter one in front of goal for the Frenchman, but he still showed that rather than burning out the candle in those first few months, he was still just getting warmed up.

His late-season goal against Everton reminded us what to expect from him: it might not be a winner, it might not even be meaningful in any real sense, it might not have even been necessary, but it would look good.

On this occasion, Richard Wright was the unlucky goalkeeper, but it could have been anyone, and they’d have struggled to get anything behind the ball. Imagine if he’d hit it from a sensible position.

In retrospect, the first two seasons were the hors d’œuvres: the main course would come in the 2003-04 campaign, as Robert showed the best of what can happen when there’s no one around to ask “are you sure about that?”.

The goal at Everton might have been stupid in theory, but it looked eminently sensible compared to some of the shooting positions which would follow.

Robert should be grateful he arrived at a time before stats were pored over ad infinitum in English football because these days there would likely be someone around to use things like “end product” or “logic” to discourage the shots from range and make the Frenchman less of himself.

We might, therefore, have missed out on the memorable double strike against Tottenham. Or the free-kick in the FA Cup against Liverpool, which seemed to ask “look, he’s done this so many times already, who are we to try to stop him?”.

Robert’s Newcastle team-mates stepping away and letting him shoot from here is the perfect example of knowing what’s best for you.

The response, too, is what you’d expect from him. Pride at the unexpected coming off, sure, but also an element of “I knew I could do that”.

Still, if you were only interested in Robert’s free-kicks and long-range thunderbolts – and the crossover in that Venn diagram – you’d have missed out on one of his greatest and most inexplicable goals in a Newcastle United shirt.

While goals like those against Liverpool and Southampton were hard to explain, they at least carried an inherent logic in the journey of the ball from point A to point B. His effort against Fulham in January 2004, however, has none of this.

Sure, you could describe it as Kieron Dyer’s delivery from the right being turned into the net by Robert from six yards, but that’s like describing Breaking Bad as “that show where a drug dealer dies”. It would be technically accurate, but the journey is always more important than its conclusion.

A backheeled volley is impressive in its own right, but doing this after shaping for a bicycle kick and contorting your body to even make contact with the ball, let alone send it into the net, is the sort of thing we can watch over and over without ever getting closer to understanding how, why, and how for a second time.

Sadly for Robert, and for Newcastle United fans, Bobby Robson’s sacking at the start of the 2004-05 season meant he’d never again reach the same heights.

He has spoken of the positive mood dissipating as Newcastle became “a different club” after the icon’s exit, and his – and the club’s – form dropped off under Graeme Souness, prompting a loan move to Portsmouth in 2005 and an eventual exit the year after.

Newcastle have yet to return to the heights they hit during Laurent Robert’s time at the club, but they’ll always have the memories.