A tribute to Ludovic Giuly, the magic elf who made a massive impact 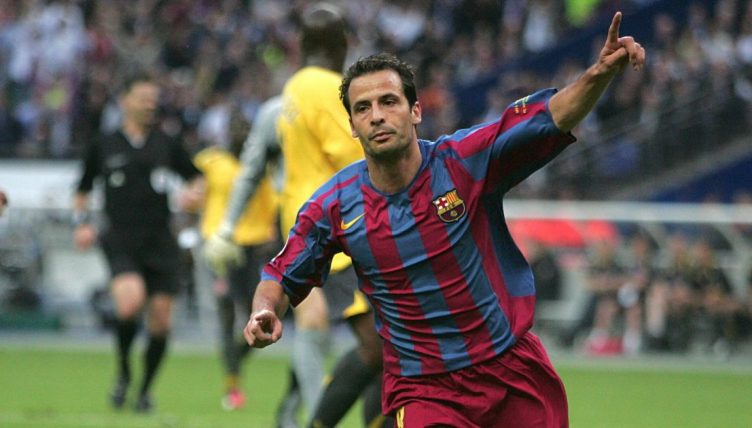 While Jose Mourinho and his Porto team rightly received credit for the way they controlled the 2004 Champions League final, in truth the contest was over long before Carlos Alberto gave them a first-half lead.

Ludovic Giuly had run the show for Monaco in the earlier rounds, but when he was forced off injured after 20 minutes, having failed to recover from a collision with Porto goalkeeper Vitor Baia, the jig was up.

The club captain had scored 18 goals in the 2003-04 season, his best return for the club and second only to Fernando Morientes as Didier Deschamps’ side upset the odds to reach the final in Gelsenkirchen.

He was never the poaching type either, and while that explains the less prolific seasons in his career, it also tells you this one was particularly wonderful to watch.

Sadly for Monaco, that 20-minute appearance was to prove to be Giuly’s last for the club before he departed for Barcelona. A player that was always selfless and ridiculously hard-working during his career, Guily’s chance to have that one game, the kind of game people talk about years later, had gone.

Maybe it was football’s way of telling him his face didn’t fit. He certainly didn’t look like a top footballer –  or indeed a footballer of any repute for that matter.

With a face older than his years and a build which suggested office worker as much as athlete, you could picture the playmaker stepping out of a 4×4 near a beach in southern France, yelling at his disobedient children to stop running.

Yet his goal for Monaco against Lens in 2003, remarkably similar to one Youri Djorkaeff had scored for Inter six years previously, shows Giuly as not just a footballer but a majestic one capable of doing things only the best in the world could do.

If you wanted to, you could have ported Giuly’s silhouette onto that of Djorkaeff and barely seen a gap, such was the similarity. These acrobatics were tough for even one man to produce, yet another had provided a near-perfect replica.

Giuly looked like a man forced to wear a football kit after forgetting to pack his suit for a conference, only for that red and white Monaco jersey to give him special powers.

This was reflected in his shirt number: the icons of the game would wear nine and 10, perhaps seven or 14 on occasion, but Giuly’s decision to opt for eight kept him out of the immediate narrative limelight. The eight was one of many, rather than the guy, and that seemed to suit him better.

But try as he might to stay out of the limelight, he just couldn’t help but find it. And when he did, he wasn’t about to pretend he didn’t enjoy it.

It was Giuly, for example, who scored the goal that knocked a star-studded Real Madrid out of the 2003-04 Champions League with a brilliant piece of improvisation to flick Hugo Ibarra’s shot beyond Iker Casillas, and if there was ever a chance for overexcitement, this was it.

The manner of the excitement was so removed from Giuly’s game in general that it was as if he had been bottling up all his energy with his calm exterior just so he could turn into a hybrid of Marco Tardelli and Tommy Wiseau when the moment demanded it.

Sadly for Giuly, he barely got the opportunity he deserved to build on his Monaco form after the 2004 final.

First off, the injury which forced him off early in Germany would also keep him out of Euro 2004, where you sense his impact would have been enough to help France avoid a shock quarter-final defeat against Greece.

Then, after impressing in his first season at Barcelona, his development in La Liga was hindered by the emergence of a young talent named Lionel Messi.

Giuly started the 2006 Champions League final in his second season but started just 15 league games in the 2006-07 campaign and was allowed to leave that summer.

Not that there weren’t some high points in Catalunya: his goal against Milan at the San Siro in 2006 ended up denying the Italian club back-to-back Champions League finals, ending up as the only goal of the game in the final four and giving us a taste of Barcelona’s ability to turn it on at will.

Ronaldinho’s ball was pure filth, but it still needed finishing: cue Giuly, who made certain Dida would get nowhere near the ball, and then cue the passion of the celebration.

If Giuly’s clash with Vitor Baia in 2004 was his first instance of being inches from glory, another such moment arrived two years later.

He thought he had given Barca the lead, only to look up and see referee Terje Hauge had pulled play back to give the Catalans a free-kick and send off Arsenal goalkeeper Jens Lehmann.

Had Hauge waved play on, we’d have got a very different final and perhaps one in which Giuly, rather than Henrik Larsson, emerged as the hero. But there was a sense with Giuly that he didn’t need to be the hero as long as his team ended victorious.

This was a man who, after all, kept playing until the age of 40 even when it meant returning to Chasselay, where he grew up, to play in the lower leagues for Monts d’Or Azergues.

Did it help that he ended his career at Stade Ludovic Giuly, a ground named after him during his Barcelona days? We don’t want to pass too much judgement on that.

10 transfers Barcelona missed out on – and who they signed instead