Rui Costa, ‘The Maestro’ who made Fiorentina, Milan & Portugal tick 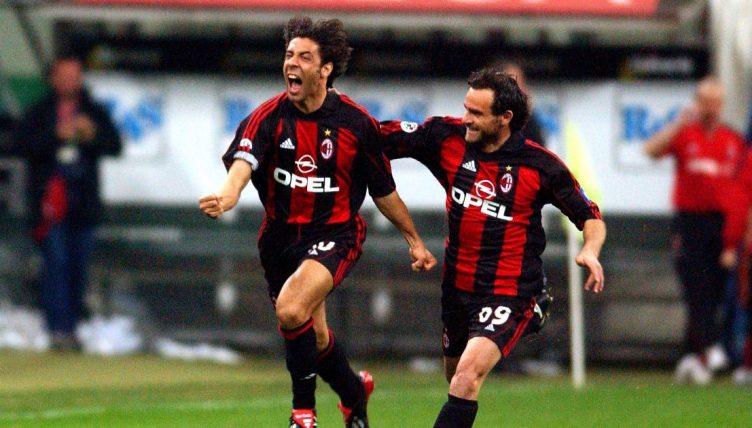 Roberto Baggio, Alessandro Del Piero and Francesco Totti flew the flag for the Azzurri while the likes of Gheorghe Hagi and Zinedine Zidane ensured the league’s foreign contingent was well-represented.

Yet there was no one quite like Manuel Rui Costa.

Whether it was for Portugal, Benfica, AC Milan or, most famously, Fiorentina, Rui Costa was the beautiful game incarnate.

A swashbuckling attacking presence in the famously defensive Serie A, the Portuguese playmaker did things most footballers could only dream of, skilfully gliding past defenders, finishing chances with aplomb or delivering pinpoint passes at pace.

Rui Costa made team-mates look good, opponents inferior and, at a time when Italian football dominated terrestrial broadcasting in the UK, made Calcio a better spectacle than it could have ever possibly hoped to be.

A product of Benfica’s famous youth academy, Rui Costa’s story is the stuff of club legend, having first been discovered by Eusebio at the age of just nine.

Part of the ‘golden generation’ of Portugal players that won the 1991 World Youth Championship under Carlos Queiroz, Rui Costa was among the stars of the tournament, scoring the winner in the 1-0 semi-final victory over Australia and converting the decisive penalty in the shootout triumph against Brazil in the final.

Yet, even at that tender age, his play was about so much more than goals.

“Rui is a master in the art of conducting the ball, covering it expertly,” Queiroz once reflected. “He is a playmaker who can decide a game, marking its rhythm with the ball at his feet and his eyes on the game.”

The next few years saw Rui Costa emerge as the main man for Benfica, forging the first of many pivotal attacking partnerships with compatriot Joao Pinto and firing the club to the Taca de Portugal in 1993 and Primeira Liga title a year later. 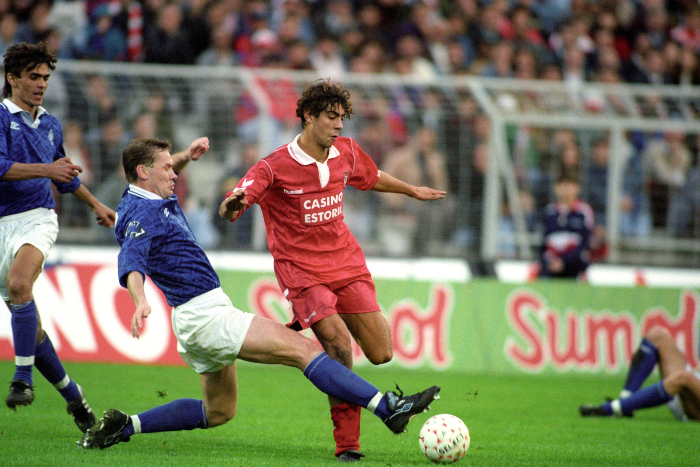 A big move abroad loomed large in the summer of 1994, with Benfica on the brink of bankruptcy and in desperate need of funds to stave off the unthinkable.

Barcelona and Fiorentina emerged as the front-runners to land the Portuguese, but Rui Costa resisted the overtures of Johan Cruyff and the Camp Nou to take the less-trodden path.

It was a decision initially made out of loyalty to Benfica – Fiorentina offered the Lisbon giants more money for their star man – but it wasn’t the last time Rui Costa put the needs of the team ahead of himself.

“Rui did not go to Barca out of love for Benfica,” Manuel Barbosa, the Portuguese businessman who brokered the deal, later told Record.

Arriving in Florence to much fanfare in a €6million deal, Rui Costa didn’t know it at the time, but he was about to fall in love all over again.

The Prince of Florence

Arriving at the newly-moneyed Fiorentina, managed by Claudio Ranieri at the time, Rui Costa found a team crying out for someone to set the tempo and, in Gabriel Batistuta, a striker desperately seeking a midfield foil.

He was only too happy to oblige, injecting a new dynamic into the Viola’s attacking play with his exquisite close control, dribbling and Paul Scholes-like eye for a pass that earned him the nickname ‘The Prince of Florence.’

The goals didn’t immediately flow, but then Rui Costa wasn’t that kind of player, once declaring: “It’s creating goals that fulfils me, more than scoring them.”

Even so, his first for Fiorentina was a screamer, coming after seven games into the 1994-95 season against Padova via an assist from Batistuta.

The pair would combine once again a week later against Brescia where, with Rui Costa bearing down on goal, the Portuguese played a slick one-two with his Argentine team-mate before finishing with aplomb. It was the start of a beautiful friendship.

If creating goals was Rui Costa’s forte, Batistuta’s was finishing them. Used in perfect tandem by Ranieri, the pair enjoyed a near-telepathic understanding on the pitch – and Fiorentina reaped the rewards.

“Out of all the strikers I played with, he had the best knack of scoring goals,” Rui Costa said.

“He could score a goal from anywhere. Free-kicks headers, penalties, from outside the area, with his back, shoulder and heel, he scored goals in so many different ways.”

Though Batistuta was an accomplished finisher, in Rui Costa he had a team-mate capable of providing assists of every shape and form, whether it was a whipped in cross, perfectly weighted pass or defence-splitting through ball.

By the end of Rui Costa’s first season at the club ‘Batigol’ had bagged 26 goals and the Capocannoniere as Serie A’s top scorer, helped in no small part by the Portuguese playmaker, who ended the campaign with nine goals himself and the moniker of ‘il Maestro’ in the Italian press.

A precursor to Zidane in Serie A, Rui Costa modelled himself on another Frenchman and Juve icon, Michel Platini.

“It was the way he played, the intelligence with which he positioned himself on the field,” he once said of Platini. “The way he dictated play, and let us not forget those mazy dribbles and cool decision-making.”

In truth, it was a little more complicated than that. For one thing, Rui Costa shared more than a passing resemblance to Socrates – the Brazil legend and former Fiorentina star – with both boasting a distinctive vision, intelligence and physical strength on the pitch, not to mention a smoking habit to match. 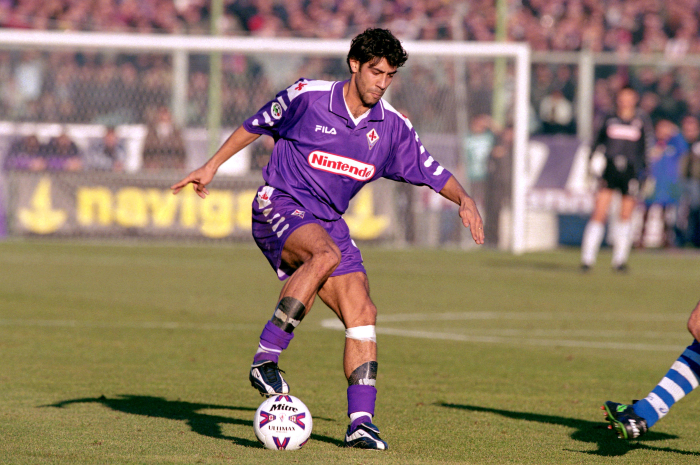 Comparisons aside, the high point of the Portuguese’s time at the Artemio Franchi came in early in his tenure, when Fiorentina won the Coppa Italia in 1996 – their first major piece of silverware in over 20 years.

Batigol bagged a hat-trick that night, but it was Rui Costa who pulled the strings with two sublime assists including a lofted ball into the box that had shades of that Ronald De Boer’s pass to Dennis Bergkamp at the 1998 World Cup.

Returning to a Florence and a parade in front of 40,000 fans after defeating Atalanta in the final, it felt like the start of a golden era – but it wasn’t.

Though Rui Costa would add a second Coppa Italia to the Artemio Franchi trophy cabinet in 2001, more silverware and, crucially, a Serie A title eluded the Prince of Florence – though it wasn’t for a lack of trying.

Perennial underachievers, going into the final stretch of the 1998-99 season, Fiorentina appeared to be closing in on a first Scudetto in 30 years. Batistuta had scored 13 in their first 13 league fixtures while Rui Costa was in the midst of his best ever season in front of goal – one that would end with him scoring 14 times.

But, when Batigol was struck down with an injury, il Maestro lost his muse and Fiorentina imploded, winning just two of their next 11 league games to finish third.

Though he continued to impress both domestically and in Europe, by the time Rui Costa lifted that second Coppa Italia in 2001, Batistuta was long gone and the club was on the brink of disaster.

Despite showing immeasurable loyalty to the Florence club having received repeated offers from elsewhere, it wasn’t long before history repeated itself, with Fiorentina forced to sell Rui Costa to help cover their mounting debts that same year.

He joined AC Milan for €43million that summer, tearfully announcing the deal in a press conference. The pain didn’t lessen any further when, on his Rossoneri debut, Rui Costa broke his wrist in the first of a series of injuries that marred his debut season.

He didn’t exactly endear himself to Milan fans either when, during a game against Fiorentina, he enjoyed another tearful embrace with the Viola faithful.

When Milan recruited Rivaldo on a free transfer from Barcelona a season later, many feared the writing was on the wall for il Maestro, but Rui Costa rallied. With Milan fans carrying banners urging Rui Costa to lay off the “violet tears” and do his talking on the pitch, the Portuguese obliged. 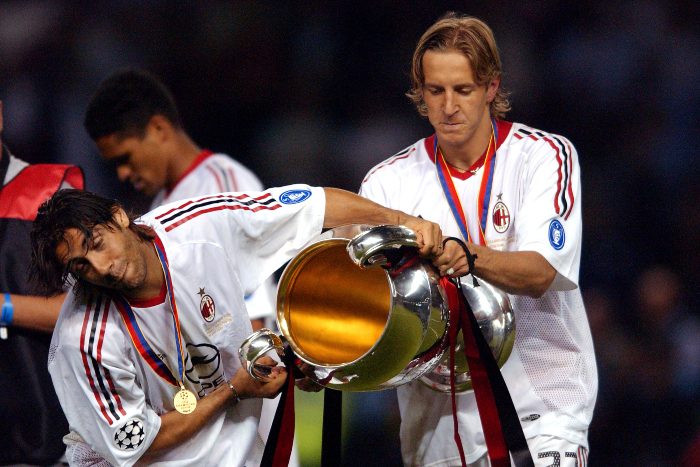 A key part of AC Milan’s Champions League success in 2003, Rui Costa standout display came in the group stage when he single-handedly took apart a highly-rated Deportivo La Coruna side at the Riazor, assisting all four goals in a 4-0 win that included a hat-trick for new attacking acolyte Filippo Inzaghi.

Another Coppa Italia followed before, against all odds, the 31-year-old yet again found himself the subject of transfer interest from Barcelona. Again the Portuguese preferred to stay put, opting to remain at the San Siro with the club that had persevered during his difficult debut campaign.

He was duly rewarded with the final trophy missing from his cabinet, a Scudetto, in 2004, signing off on the title win with a delightful curling strike on the final day of the season against Brescia – his final goal for the Diavolo.

He eventually returned to Benfica in 2006, turning down a €4.6million contract to see out his career with the club where it all began.

A part of Portugal’s fabled Golden Generation, Rui Costa and co. thrived domestically but didn’t quite live up to the billing on the international stage, though there were plenty of highlights along the way.

Twenty-six goals in 94 international appearances tells its own story and, while Rui Costa was often unfairly handed second billing behind Luis Figo for the national team, his individual and collective brilliance often shone through – particularly against England.

At Euro 2000, it was Rui Costa who dragged Portugal back from the brink, laying on goals for Joao Pinto and Nuno Gomes to help turn a 2-0 deficit into a 3-2 win, while his wonder strike against the Three Lions at Euro 2004 was his last and arguably best goal for Portugal, proving a worthy send-off.

In an era when hard work and selfless play rarely sits alongside individual talent and flair, Rui Costa serves as a timely reminder that, in football, the two are not mutually exclusive.