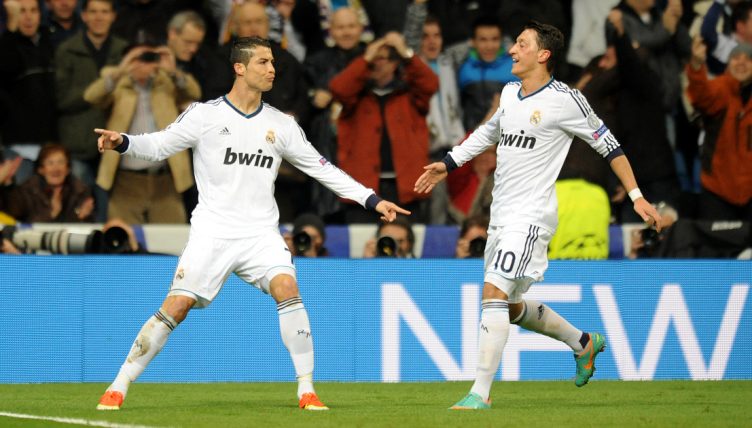 “Ozil is fantastic. He can read the game and knows when he needs to play the pass when he should take a dribble – that’s simply class.”

High praise from none other than Cristiano Ronaldo, but he had every reason to love the German. Only Gareth Bale and Karim Benzema have provided more assists to Ronaldo in his career, and Mesut Ozil played with him for just three seasons.

Those three seasons came between 2010 and 2013 at Real Madrid when La Liga was at its peak for quality, entertainment and superstar value. Lionel Messi, Xavi, Xabi Alonso, Ronaldo, Radamel Falcao and many more footballing icons were somehow in the same league at the same time, whilst El Clasico became the ultimate showdown between two teams boasting incredible talent.

With all these stars playing in their prime, it is tough to pick out standouts beyond Messi and Ronaldo. Enter a 5″11, 21-year-old playmaker from Gelsenkirchen.

Madrid beat Manchester United, Barcelona and Arsenal to the signing of the Germany International from Werder Bremen for around £15million, following a standout campaign at the 2010 World Cup, where he was the top assist provider.

This was much to the annoyance of Wayne Rooney, who reportedly ‘begged’ manager Sir Alex Ferguson to bring him to Old Trafford.

It was during his time at Los Blancos where Ozil established himself as one of the greatest playmakers of all time. He was the top assist provider in La Liga in all of his seasons there, and ended his Madrid career with 80 assists, more than anyone else in Europe during the same period.

Taking the No.23 shirt previously worn by Guti and David Beckham, Ozil made his first start in a 1-0 win over Osasuna, slotting straight into his preferred 10 role behind Gonzalo Higuain and in between Cristiano Ronaldo and Karim Benzema. Some company.

It didn’t take him long to register his first assist, creating Angel Di Maria’s opener away at Real Sociedad in the very next game, and a few weeks later notched up six goal contributions in just three games. This Madrid side became a dangerous weapon going forward, and Ozil was the gunpowder.

Ozil also got assists on his first two Champions League games for the club and scored against AC Milan in his third game. He ended the group stage with five goal contributions in five games as Real finished top, a period which included one of his greatest assists.

We miss watching Ozil in the groove😞pic.twitter.com/2Q9joix2y2

In the quarter-finals against future rivals Tottenham, the silky playmaker set a new record for the most chances created in a Champions League match: 12, a record that stands to this day.

By the end of his debut season at the Santiago Bernabeu, Ozil had won the Copa Del Rey, created 25 goals, which was the most in Europe, and was joint top with Andres Iniesta on six Champions League assists.

Once the 2011-12 season started, Ozil was already established as one of the best midfielders in the world. He kept up his form from the previous season and ended the campaign with 35 goal contributions in 52 games.

This was the season where Ozil would finally win a title. Real Madrid were playing some of the best counter-attacking football in Europe, Ronaldo and Benzema were on fire and they ultimately finished on 100 points, nine ahead of Barcelona.

Ozil was instrumental to this title victory throughout the season, but this peaked at the Camp Nou in April. Knowing a win would go a long way to securing La Liga, Madrid found themselves drawing 1-1 after Alexis Sanchez cancelled out Sami Khedira’s opener.

It was Real that would have the last laugh though. Shortly after Barcelona’s goal, Ozil picked up the ball in space on the right wing. What happened next is written into history.

The maestro played a perfectly weighted through ball over 40 yards, finding Ronaldo in behind the Barcelona defence. All he had to do was take a touch, before slotting in and producing the legendary ‘calma’ celebration. That moment essentially won Real Madrid the title in the backyard of their greatest rivals, and they had Ozil to thank.

ON THIS DAY IN 2012: The iconic 'Calma' celebration was born as Cristiano Ronaldo scored the winning goal in a 2-1 victory for Real at the Camp Nou. 👑

Pre that Ozil assist as well 👀

Ozil was no longer the small, shy 21-year-old who arrived in the most intense dressing room in the world. He was a global phenomenon, wearing Luis Figo’s iconic No.10 shirt, for the Spanish champions. He was again Europe’s top assister and top chance creator, and he drew comparisons with Zinedine Zidane for his sublime skill and vision.

It was also time for a new image. After Euro 2012, where again, Ozil was top assister, he ditched his longer hair and headband that had become associated with him for a cleaner look, and it was clear that the humble boy from Gelsenkirchen had evolved into a superstar alongside his team-mates.

“Ozil is unique,” Jose Mourinho later said. “There is no copy of him – not even a bad one. He is the best number 10 in the world. He makes things very easy for me and for his team-mates with his football vision and the decisions he makes.

“Everyone loves him and sees a bit of Luis Figo and Zinedine Zidane in him.”

He was also playing with the confidence of a world-beater. Even in the biggest games against the biggest names, he would still produce moments of magic that would even leave Iniesta in the opposite team gobsmacked. Iniesta even praised his rival, stating that he “understood football better than anyone else.”

It was against Iniesta’s Barcelona where he took one of the greatest first touches seen in El Clasico, controlling a 40-yard ball with the back of his heel.

Mesut "cruise control" Ozil doing what he does best!

Can you name a player with a better first touch?pic.twitter.com/fSaByf5Wi4

It was moments like this that made him become a fan favourite at Madrid, which is no easy feat at all. Gareth Bale can tell you how difficult it is to appease yourself to the Madridistas, but Ozil was not only accepted, he was adored.

His final season at Madrid remarkably saw him finish top assister in Europe again, for the third season in a row. Real Madrid had a disappointing season overall, but Ozil was now firmly established as one of the best players in the world at just 23 years of age.

Ozil then departed Real Madrid, arguably prematurely, following the arrival of Gareth Bale. Madrid fans and players were shocked and disappointed with his departure, and despite his career at Arsenal ending on a sour note, he remained a sublime player during his older footballing years.

“Mesut is a different kind of player. If it were up to me, he would be one of the last ones to go,” Sergio Ramos said after Ozil’s departure. “But Ozil and the club have made the decision and I can only wish him the best.”

But he was not the only Madrid player to criticise the decision, as Ronaldo also bemoaned his exit.

“The sale of Ozil is very bad news for me,” Ronaldo said. “He was the player who best knew my moves in front of goal. I’m angry about Ozil leaving.”

His relatively short time at the club means he will not be remembered in the same way as legends such as Ronaldo, Raul, Figo or Benzema, but he has the numbers, memorable moments and lasting impact to be considered a cult hero for one of the biggest clubs in the world.

Imagine a 21-year-old joining a super club, benching a Ballon D’or winner in Kaka almost immediately, and becoming the best playmaker in the world, all within three seasons now.

Ozil left the Bernabeu with more Real Madrid assists than Zinedine Zidane and Luka Modric, despite being there a shorter time than both.

The midfielder may have his faults but Mourinho was right, there may never be another quite like him.