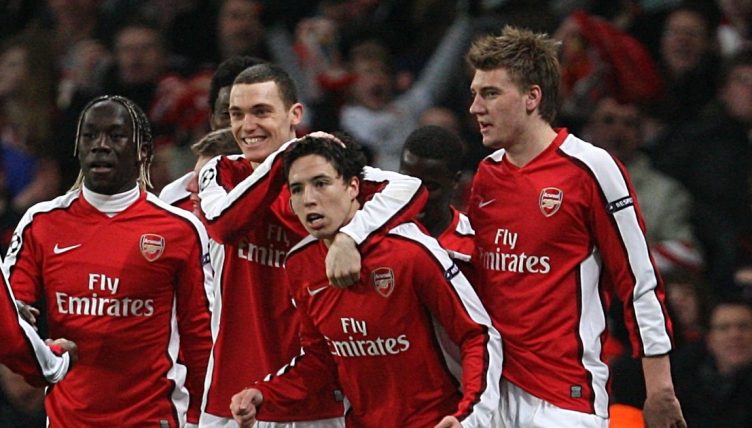 Samir Nasri annoyed the Arsenal fans and often underwhelmed the Manchester City fans, but it shouldn’t be forgotten just how talented and exciting a player he was at his peak.

It takes a lot for a player to see a team-mate score a Champions League hat-trick and still manage to steal the show themselves, but on March 9, 2010, Samir Nasri found a way.

You might look back at Nicklas Bendtner’s treble against Porto in 2010 as so preposterous it shouldn’t even belong in the football canon (you shouldn’t, but that’s a different argument altogether), but Nasri’s goal in that same game can be counted among the best scored by any player for an English club in the competition.

Holding on to the ball in the right channel, there are three Porto players blocking the Frenchman’s route to goal. Except there aren’t, because he’s using them to mark out a new path.

It’s like a Formula 1 driver tricking an opponent into giving him a guard of honour, or a child completing a hedge maze by burrowing underground and using the soil already there to lead their way.

Nasri waltzes through the mass of Porto players as if giving a guided tour of his home, holding open the Raul Meireles-shaped door, pointing out the Cristian Rodriguez-designed bathroom on the left and telling his guests he’ll come back to that later, then quickening his pace to make sure the Maxi Pereira-breed puppy doesn’t accidentally trip him up in a fit of energetic confusion.

As for the back door and its Helton frame? You’ve got to be clever to find a way through, but he’s figured out this trick that works every time. Start off by being gentle, then let rip at the very last.

When Nasri moved to Arsenal in the summer of 2008, we were still at the point in Arsène Wenger’s reign when top young talents – especially those from France – could be easily swayed to move to North London to play under Le Professeur.

He had already been watched by the club when coming through at Marseille, and the thought of joining Premier League title contenders (look – he didn’t know what we know now) was no doubt appetising.

To look at the then-21-year-old, one might have expected dainty footwork and creativity, and they wouldn’t have been wrong, but what elevated him above others of that type was the ability to blend this with an obsession with shooting with such power that he looked like a man trying to make every shot count, as if each one might be his last.

It wasn’t enough for the ball to cross the line, he needed the net to ripple or the crossbar to shake – preferably both.

The sight of a slight teenager in his first-ever season scoring a goal like Nasri’s against Strasbourg is Wayne Rooney levels of preposterousness: it’s the strike of a man who has put all his energy, mental and physical, into doing exactly this.

He might have blown hot and cold at Arsenal, but the best parts of the prodigious talent at the Velodrome could also be seen at the Emirates.

Indeed, one of his last goals in an Arsenal shirt could just as easily have come years earlier, demonstrating the confidence and assuredness of a player who had never been stopped before and had no reason to believe he would ever be stopped.

If you were to point to a display which showed Nasri at his Premier League best, it’s impossible to look past the 2010 victory over Fulham.

He knew the types of goal he was going to score and just needed to wait for others to realise that too. Eventually they relented.

The first was good enough, holding fire while two defenders fly past as if he was waiting to stroll across a Grand Prix track.

The second, however, is the kind of goal that doesn’t just tell the opponent they’ve lost but that they were naïve to ever think they had hope.

When he plays the ball into the feet of Andrey Arshavin, he knows his job isn’t yet done, even curtailing a call for a return ball as if to tell himself “no, not yet”.

Once he receives the final pass from Robin van Persie seconds later, it’s the same story as with the first goal; calm while surrounded by panic.

Except this time, perhaps stung by the first goal, the Fulham defenders accept the inevitable far earlier than they need to. They’ve cut their losses, allowing him through to avoid the embarrassment of diving in desperately, only to watch on as he twists the knife by running around the ball to finish right-footed.

It reminds them the goal will be on his terms, not theirs – it could only have been more beautifully disrespectful if he’d dropped down onto his hands and knees to finish with a header.

Considering how exciting he was at such a young age, the way Nasri’s career has fizzled out is sad. Still, at least the best was extremely good, even during a spell at Manchester City which petered out but not before two Premier League titles were secured.

Indeed, one of his last goals for City – a Champions League strike against Roma – brought memories of his Marseille days flooding back.

To make goals-out-of-nothing a trademark is the sign of a player who refuses to march to the beat of anyone other than himself, but the moments which helped him stand out as a young pretender weren’t enough to keep him at the forefront when surrounded by superstars.

When that happens, though, you eventually reach the stage where you can return to doing whatever you want, free from the shackles of clinging to the idea of playing every week.

Sometimes it’s easier to thrive when your main goal is just to impress yourself.