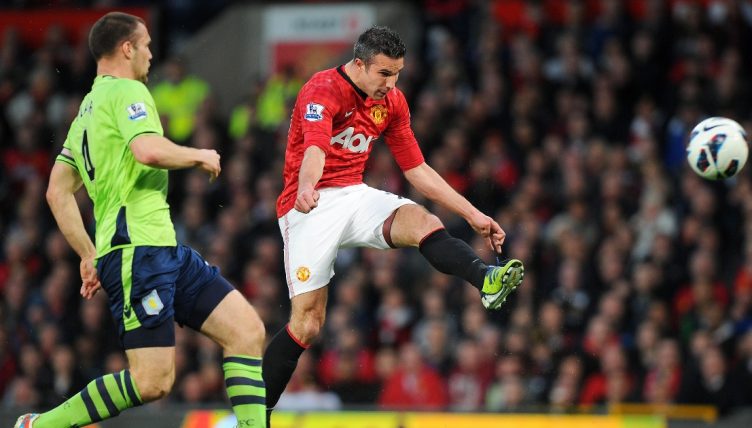 Robin van Persie scored 144 Premier League goals for Arsenal and Manchester United, but he should be remembered for one skill above all others: his amazing knack of scoring amazing volleys.

People in football like to talk about ‘vision’. It’s one of those terms that sounds self-explanatory but, when examined a little closer, is actually full of implied meaning.

The football definition of ‘vision’ is a bit like that of ‘flair’ or ‘technique’.

Tell somebody with no interest in football that Lionel Messi has ‘flair’ — which he undoubtedly does — and they’ll be confused. But his haircut is so simple, they’ll say. But his clothes are so plain.

They would be right, of course, but they would be missing the fact that ‘flair’, in football’s somewhat arbitrary dictionary, means neither stylishness nor a general aptitude for the sport but the ability to improvise one-on-one skills.

‘Technique’, too, is loaded with implied meaning.

Consider the following: does Javier Mascherano have exceptional tackling and marking technique? The answer is clearly yes, but would Mascherano ever be described as a footballer with sublime ‘technique’? Perhaps among his former team-mates at Hebei China Fortune, but rarely in general.

No, ‘technique’ — a broad and ambiguous term at face value — means, for whatever reason, good ball control, good dribbling skills, perhaps the ability to strike a dead ball with swerve. It is a term uniquely reserved for attacking traits.

‘Vision’, however, might be the most confusing of the lot.

It’s a helpful term, no doubt, differentiating between mere physical passing ability and the slightly more broad term of ‘creativity’, but it’s still a selective one.

A defender spotting an opponent’s run, for example, is rarely described as an act of ‘vision’. Instead, the defender must make do with similarly loose terms like ‘anticipation’ or ‘reading of the game’.

But what of players who have mastered a different kind of ‘vision’ — that of a non-Riquelme variety, but clearly, unambiguously, to do with sight and foresight? How to pay tribute, in footballing vocabulary, to a player whose vision was superior to all others?

When Arsenal’s Robin van Persie scored a flying volley against Charlton in September 2006, the Dutch striker opened a portfolio of stunning airborne strikes that would become his niche for the next decade.

It was a breathtaking goal, and one that received top marks from manager Arsène Wenger.

“It was the goal of a lifetime,” said the Frenchman. “He’s played for a long time and I’m not sure he’s scored one like that.

“The ball looked like it would go over the bar so when it came down and in the corner it was unbelievable.”

For Arsenal, Manchester United and the Netherlands, the forward produced thunderous volley after thunderous volley — his impressive M.O. being an ability to make perfect contact with even the most hopeful long-range passes.

Wenger knew many things, but his “goal of a lifetime” assessment couldn’t have been further from the truth.

Van Persie scored several memorable volleys for Arsenal after the Charlton wondergoal, including two in 2011-12, his final season there.

The first, a flyer against Everton in December, was matched in quality by a last-minute FA Cup winner against Liverpool in February.

But Van Persie wasn’t dependent on North London for inspiration.

In his first season at Man United, the Dutchman scored perhaps the perfect version of his signature goal, converting a Wayne Rooney pass (delivered from inside the United half) in a match against Aston Villa.

It was the second goal of a Van Persie hat-trick, in a game that secured his team the Premier League title.

“Maybe if you look at the day, the occasion and the importance of the goal it was my best one,” he said after the match.

“You need to be a bit lucky with those goals because most of them go over or wide. That didn’t, which was a big relief.”

Interestingly, Van Persie’s most famous goal ever was not scored with that reliable left foot, though it did have many of the hallmarks of his trademark volleys.

Van Persie’s iconic swan dive against Spain at the 2014 World Cup will be remembered as one of the competition’s greatest goals.

Van Persie’s extraordinary ability to score flying volleys isn’t just down to his ability to kick the ball accurately.

This in spite of his own assessments. After the Villa strike, Van Persie’s understated opinion was that “the only thing I had to do was time it right and keep my body straight, level with the ball”.

Well, yes, but “timing it right” is easier said than done.

So what, in the end, was his secret?

In a wholly abnormal sense of the word, the Villa goal and Van Persie’s other equally great ones were the result of outstanding and unparalleled vision.

To spot the exact flight of a pass coming from 50 yards is a phenomenal feat of both sight and foresight. Without that kind of vision, far more of the Dutchman’s wondergoals would have gone “over or wide”. Many players would have hit thin air.

Yet his is a kind of ‘vision’ rarely classified in such terms.

There’s something surprising about that. One could argue that the vision required to spot an incoming pass — and predict its destination to the exact millimetre — is as valuable and difficult a skill as producing that kind of pass in the first place.

While the assists for Van Persie’s most legendary goals — an Alex Song ping, a Wayne Rooney thump, a Daley Blind diagonal — were all fine ones, the ‘vision’ required to pick out a forward-running striker requires perhaps less focus and accuracy than the vision required to volley a ball that has just travelled half the length of the pitch.

In creating this playmaker-centric concept of ‘vision’, perhaps we’re doing a disservice to the intelligent, eagle-eyed forwards actually getting on the end of those Hollywood passes. Perhaps vision is as much about reaction as it is action.

As such, Van Persie should be remembered not just as a classy forward blessed with great ‘technique’, but as a true visionary in the art of vision.