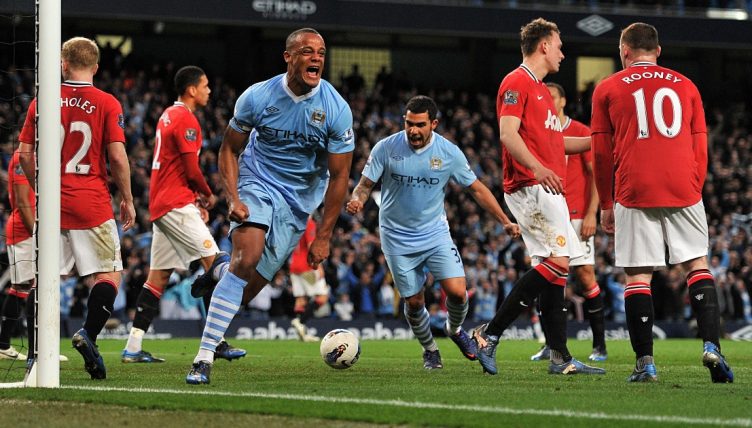 When Vincent Kompany joined Manchester City on August 22, 2008, he became one of the last signings of the Thaksin Shinawatra era.

But while the club would soon begin making more extravagant purchases, including Robinho for £32.5million, the £6million acquisition of Kompany quickly proved shrewd business.

At the time, the defender was tipped as a hot prospect following impressive displays at Anderlecht (where he made his debut at 17) and then Hamburg.

In fact, the German club had paid a similar fee to sign him just two years earlier.

But if you happened to enjoy watching YouTube skill compilations in 2008, you might have known Kompany for a different reason.

All recognisable names in 2008, and all connected by a common thread.

At the time of Kompany’s transfer to City, each of these players had carried out — or at least attempted to carry out — a piece of skill known as a ‘hocus pocus’ or, to use Taddei’s terminology, an ‘Aurelio’.

The ‘hocus pocus’, for the unenlightened, is a variant on the ‘elastico’, the trick mastered by Ronaldinho that involves nudging the ball with the outside of the foot before quickly snapping it back in the other direction with the instep.

More visually arresting but less practical than the ‘elastico’, the ‘hocus pocus’ puts things in reverse. It involves dragging the ball behind the standing foot with the instep, then quickly pushing it in front of the standing leg with the outstep.

Needless to say, the trick almost never works on the pitch.

Its most perfect example, the Platonic form of the ‘hocus pocus’, was executed by the aforementioned Taddei, then of Roma, in October 2006.

That instance of the trick — unquestionably the best ever performed — resulted in a blocked shot.

But rewind a moment and take a look at that list of players. Wingers. Brazilians. Showboaters. Huge prospects who often flattered to deceive. And Vincent Kompany, a six-foot-three mountain of a centre-back regarded as one of the best defenders of his generation.

Vincent Kompany did a ‘hocus pocus’ and then became the antithesis of showy tricks.

How could that happen?

Vincent Kompany’s career is remarkable for many reasons. In his 11 years at Man City, the Belgian won the Premier League four times and was named Premier League Player of the Season in 2011-12 — the year in which City won their first title in 44 years.

He also overcame numerous injuries, when at times it seemed his impressive career would be cut short.

Kompany stayed until City until he was 33 after winning the FA Cup in his final game. By contrast, by the same age Wilhelmsson had long since taken his bag of tricks to Qatar and Saudi Arabia.

It’s not that tricks always go hand in hand with a lack of dedication or professionalism, of course. Look at Messi. Look at Ronaldo. Tricks are necessary for attacking players; they are tools of the trade, often as pragmatic as they are watchable.

It’s just that this particular trick, this self-indulgent little whirl called a ‘hocus pocus’, isn’t so pragmatic. Particularly in the 2000s, the balletic move really was a hallmark of style-over-substance players.

Just look at that list again. This was a Vincent Kompany flirting with a very different brand of football.

In fact, it’s worth considering an alternate timeline in which Kompany nurtured not his immense defensive skills but his once-impressive arsenal of dribbling tricks.

That timeline isn’t as distant as it might seem.

After all, in his early Man City days, the Belgian was often deployed in central midfield by manager Mark Hughes.

“My favourite position is in midfield, but I can deliver just as good a job from central defence,” Kompany said in 2009. “Whenever I get the chance to play then I just try to take it.”

This was defensive midfield, of course, not a free role for pirouettes and step-overs, but Kompany clearly had a decision to make in his early 20s: would he pursue a more enjoyable technical role in midfield, or focus his energies on defending, a practice to which his body was always better suited?

City fans will be thankful that, not long into his life in England, Kompany settled into defence for good, building the foundations for the club’s successes that would follow.

But if his gradual transition into a no-frills defender was a sign of his growing maturity on the pitch, his influence off it has been just as commendable.

For virtually his entire stay in Manchester, Kompany was the most amiable component of his club — a well-liked member of the community who always spoke respectfully of team-mates and opponents alike.

And considering he was captain of one of the world’s richest teams, a club that has accrued its fair share of mercenaries since its financial revolution, Kompany is phenomenally likeable.

During the 2018 League Cup final against Arsenal, for example, one vintage moment of Vincent put a smile on the faces of neutrals everywhere.

Neck and neck with 28-year-old forward Pierre-Emerick Aubameyang, a man who sprints faster than Usain Bolt over 30 metres, 31-year-old Kompany outpaced his opponent before shrugging him off.

After notching a goal in the 3-0 win, the captain was named man of the match.

When asked about his moment of magic after the match, Kompany simply said: “Sometimes it’s good to surprise people.”

The biggest surprise of all? How a tricksy 22-year-old defender, signed for a third of the price of Jô, became a Premier League legend.