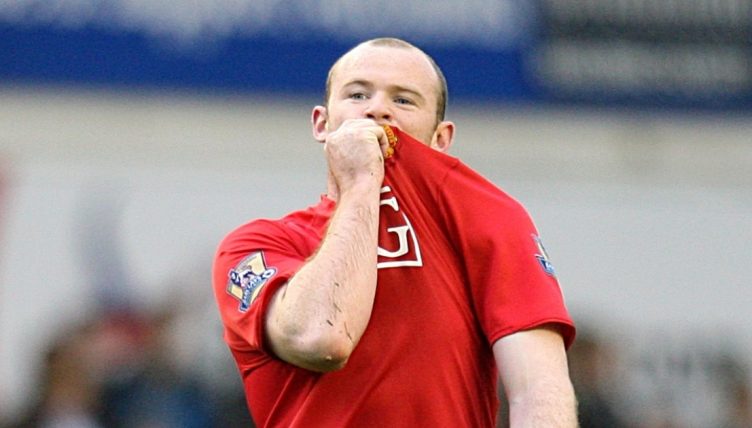 Wayne Rooney grew up as an Everton fan and even came through their academy, but when he was on the pitch for Manchester United it was pretty clear where his allegiances lay.

Rooney had signed for the Red Devils as an 18-year-old in 2004, joining for a fee of £27million, a sum that would prove to be a steal in the long run.

He would eventually re-join the Toffees in 2017, having become United’s all-time leading scorer, but until that point, he seemingly didn’t care too much about anyone outside of Old Trafford.

The striker also didn’t take criticism very well, as was made abundantly clear to the nation during the 2010 World Cup, when he told the camera: “Nice to see your home fans booing you, talk about support,” after England’s poor showing against Algeria.

Both of the aforementioned traits were shown most obviously in two games at Goodison Park, his stomping ground as a teenager before making his big move, when he kissed the United badge – not once, but twice.

The first incident came in 2007. Everton had gone 2-0 up but a goal from John O’Shea and Phil Neville’s own goal had brought the game back to level terms.

With the game – and United’s title aspirations – in the balance, Rooney stepped up when Lee Carsley’s header from a cross into the box deflected the ball towards him. He took it in his stride, beat Tony Hibbert and slotted the ball past Ian Turner.

He was clearly pleased to give it to the Everton fans behind the goal, goading them with his arms in the air before planting a smacker on the United badge and celebrating with his own fans.

🕦OTD in 2007: Wayne Rooney kisses the badge at Goodison Park in a famous comeback

Maybe it was a rush of blood, perhaps he wanted to do something that would get under the skin of Toffees fans, but whatever the intentions, this definitely wound them up and it only got worse when he assisted Chris Eagles to secure the 4-2 win.

Fast forward another year and Rooney was at it again, though this time it was more out of frustration than joy.

Darren Fletcher had opened the scoring for United, but Marouane Fellaini – then David Moyes’ new £15million signing – had come up with one of the headers that would become his trademark to equalise.

All of this was clearly causing frustration for Rooney, and it all got a bit too much for him when he was booked for fouling Mikel Arteta as the Spaniard went to clear the ball.

The red mist seemed to descend as the yellow was raised and Everton fans in the terraces were revelling at his misfortune.

He clearly wanted to get back at them. Whether he thought of last time is unknown, but he knew kissing the United badge would annoy them, so he put it to his lips, held it there for a second and then pointed towards the stands.

This action earned him another talking-to from the referee, far more jeers from the Everton faithful and a fairly swift departure from the pitch, as Sir Alex Ferguson replaced him with Nani.

The two badge kisses had very different outcomes, but at the very heart of them both was a need to frustrate the opposition supporters who had once adored him – he did such a good job that it caused a feud between player and fanbase for years to come.

While Rooney may regret it in hindsight, there is something almost admirable in a player being able to block out any emotional connection with a club or place that he is so closely linked to for 90 minutes.

Yet he completely detached himself from that emotional connection, using it as leverage to try and get the better of Everton and ultimately win.

This sort of mentality won’t have got him a lot of friends – and has arguably made him look foolish at times – but it is this willingness to do whatever it takes that also likely played a large part in his success.

So Wayne, here’s one to you kissing the United badge to infuriate the whole of Goodison Park – not once, but twice.