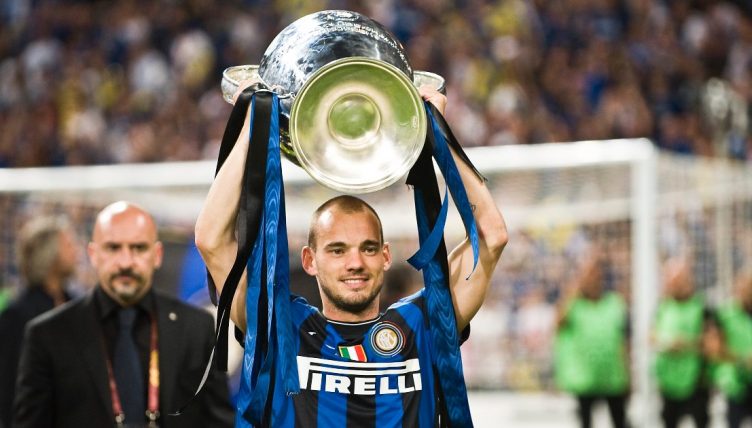 Wesley Sneijder may have only had one season at his world-class peak – but it was a year that nobody at Inter Milan will ever forget.

Sneijder had come through the Ajax youth system and established himself in their first team before earning his big-money move to Real Madrid in 2007.

The Dutchman won the La Liga title in 2007-08 but suffered from the reintroduction of Madrid’s Galacticos policy in the summer of 2009.

Following Barcelona’s success in 2008-09, Madrid spent €65million on Kaka even though the best attacking midfielder in the world was right under their noses.

Their spending spree saw Sneijder deemed surplus to requirements at the Bernabeu, and the midfielder was sold to Inter Milan for just €15million.

But Madrid’s loss became Jose Mourinho’s gain. The manager wanted Sneijder to be the final piece in his counter-attacking jigsaw, and he was quickly rewarded.

Sneijder enamoured himself to the Inter supporters and Mourinho, combining the grace and elegance of a ballet dancer with the energy of a Duracell bunny.

“Who is my perfect number 10? Wesley Sneijder and Deco. Because they could defend, get in the box and finish goals? Yes,” Mourinho later told the Daily Telegraph in 2015.

In honour of Wesley Sneijder's retirement. Today's #ClassicGoalOfTheDay is his first ever goal for Inter. Last minute winner against Udinese in 2009. Great player. Legend pic.twitter.com/qB6nC46NV5

The two-footed midfielder was blessed with excellent balance due to a low centre of gravity and could also turn defence into attack with one pass or a drop of a shoulder.

Sneijder became the focal point of Mourinho’s masterpiece, pulling the strings and unlocking tight defences to set up Samuel Eto’o and Diego Milito on a regular basis.

He was finally fully realising his considerable potential in Italy; his influence on the Inter side was clear to see as they retained their place at the top of Serie A.

At that stage, his status as the best attacking midfielder in football was almost unchallenged, and he could have walked into any team in the world.

In the space of a few months, Sneijder had gone from being on the scrapheap at Madrid to becoming one of the most-coveted players in Europe, while Kaka was struggling in Spain.

He may not have scored a huge amount of goals in his debut season, but when he did they were almost always decisive.

Sneijder was instrumental in Inter’s run to the Champions League final, starring against Chelsea, CSKA Moscow and then Barcelona.

Pep Guardiola’s side took the lead at the San Siro through Pedro but Sneijder stepped up when his side needed him most and fired past Victor Valdes to equalise before dictating the rest of the game.

The Nerazzurri eventually went on to win the first leg 3-1 and a defensive masterclass at the Camp Nou helped them to secure a place in the final.

After winning Serie A and the Coppa Italia, Mourinho’s Inter were now setting their sights firmly on European glory.

Sneijder’s 15th and most important assist of the season came in the Champions League final against Bayern Munich, picking out Milito for the striker to make no mistake in front of goal.

The Argentine’s second goal of the game secured Inter’s victory and completed an unprecedented Treble for an Italian side.

It was only fitting that Sneijder lifted the European Cup at the Bernabeu while Real Madrid reflected on a season that ended without a single piece of silverware.

However, Sneijder’s season wasn’t over just yet.

At the World Cup that summer, he inspired Netherlands to the final, scoring five goals and winning the Silver Ball as the tournament’s second-best player.

Indeed, if it wasn’t for the foot of Spain goalkeeper Iker Casillas, Arjen Robben would have converted Sneijder’s through ball in the final, and he would have been a World Cup winner as well.

Despite his performances for club and country in 2010, Sneijder only finished fourth in the Ballon d’Or running, behind Barcelona trio Lionel Messi, Andres Iniesta and Xavi.

“People still approach me to tell me that they feel I should have won the Ballon d’Or in 2010,” Sneijder told Fox Sports NL in 2019. “I keep telling them that winning the Champions League was nicer than an individual trophy.

“Of course, it would have been the icing on the cake, but it’s satisfying enough that people tell me I should have won it.”

Unfortunately, Sneijder’s time at the top was all too fleeting.

Persistent knee problems ensured that he was never really the same player. After four years at Inter and numerous links to Manchester United, he was sold to Galatasaray in 2013 before retiring after spells at Nice and Al-Gharafa in 2019.

Sneijder may not have had the consistency of Messi or Cristiano Ronaldo during his career, but for one season only he was up there with the very best.