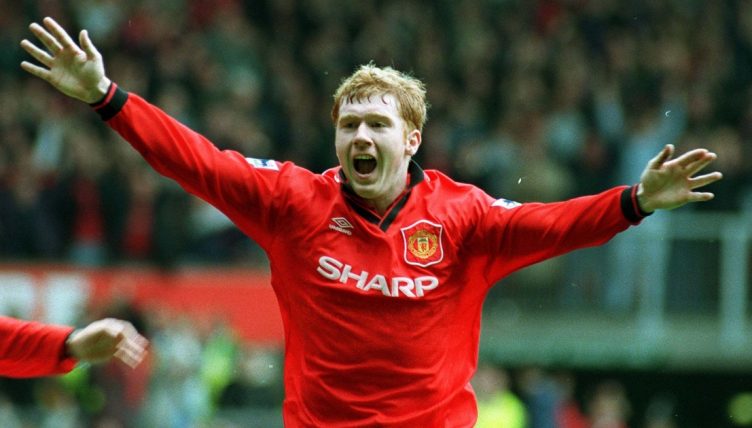 On July 23, 1993, Paul Scholes signed his first professional contract at Manchester United. The next year, long before he became the midfield icon we know and Xavi loves, Paul Scholes scored goals.

I still remember going to a family friend’s house as a seven-year-old, my parents having switched off the car radio with United trailing 2-0 to Ipswich Town.

By the time I got a chance to check Ceefax, later that day, I could see the home side had still won, but there was an unfamiliar name on the scoresheet. Scholes? Who’s that?

I was right not to know. Scholes had only made his debut a few days earlier in the League Cup, and news of his two goals against Port Vale (a) related to events past my bedtime and (b) hadn’t travelled as far as north-west London.

This was 1994, long before most houses in my area even had internet, when the closest thing we had to a viral news story was the playground rumour that “Alan Shearer earns six pounds per second”.

Scholes would have to do a lot more to leave a lasting impression, but it turns out that was never in any doubt.

Back in 1994-95, United were left with a gap in attack when Eric Cantona was handed a lengthy ban for attacking Crystal Palace fan Matthew Simmons in January.

Whether or not Alex Ferguson saw Scholes’ long-term future in midfield, he needed goals, and so the youngster – who only turned 20 a couple of months after the Ipswich goal – played most of his 17 games that season in a more attacking role.

He was pretty productive, too. Considering only six of those 17 games were starts, five goals was a healthy return, and his value was never more evident than in a 3-2 win over QPR shortly before Cantona’s ban.

“His movement off the ball was exceptional and he is a good target though he is a little chap,” Rs manager Ray Wilkins said after the 5ft 7in Scholes, then still considered a forward, scored two headed goals in a come-from-behind victory.

However, with the benefit of hindsight, we might point to an earlier moment as more defining.

With United yet to trouble home goalkeeper Sieb Dykstra, the Dutch stopper parried a cross into the air. It wasn’t cleanly into Scholes’ path, but he made it so, flinging his body into the air to hit a bicycle kick with such speed that it was hard to figure out how he got himself in position so rapidly.

It was our first glimpse of Scholes the chess player, recognising he didn’t need to react if he’d already anticipated the next couple of moves. Even as he used this skill for interceptions and through-balls later in his career, you got the sense he could have remained a great goalscorer if he wanted to go down that path.

One of United fans’ earliest chants about the academy product was “Paul Scholes… he scores goals,” and his poaching would continue over the coming seasons.

The 1995-96 season was one of only two in a long career in which he hit double-figures in the league, and the 10 goals that year came from just 16 starts and a further 10 games as a sub. Across all competitions, that record improved to 14 goals from 31 appearances, 13 of those from the bench.

“He doesn’t surprise me one bit,” Ferguson said of Scholes’ achievements that season, while he was also labelled the Cantona of the reserve team.

Many of the goals in those first few seasons were poached efforts, such as the stooping header to settle a tight Manchester derby, but we would soon see sights of the thunderbastard merchant we’d grow to love.

With United trailing 1-0 to Sheffield Wednesday during the 1996-97 campaign, and Cantona’s goal drought contributing to a run of just two wins from seven games which would soon become two from eight, the ball fell into Scholes’ path 25 yards from goal.

As he would show countless times in his career, you don’t need to set yourself if you’re born set. Kevin Pressman, no stranger to venomous shots himself, never stood a chance.

Were it not for the emergence of Ole Gunnar Solskjaer, there’s every chance the idea of Scholes as a poacher wouldn’t just be a relic but rather the story of his career.

It’s tempting, even, to imagine a world in which he filled one of the strikers’ spots at the 2006 World Cup and didn’t leave England high and dry after Michael Owen’s injury.

Not to say Scholes will be too upset by the career he had in a deeper role – where he was still able to end his career with more than 100 Premier League goals, let’s not forget – but the world could well have looked very different.

After all, you know what they say about Paul Scholes.