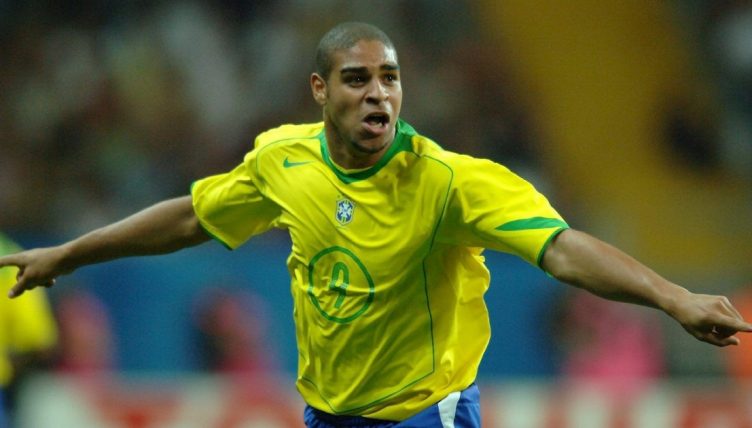 “It’s an inexplicable emotion,” Adriano said after the whistle had blown on the penalty shootout in the final of the 2004 Copa America. It was little wonder he had trouble elucidating his feelings. Brazil had beaten Argentina, and he was the hero – the one nobody expected.

Adriano travelled to the competition as a player deemed inadequate for the Selecao, a little-trusted replacement for Ronaldo Fenomeno. But the Copa was a chance to assert himself, and he grabbed it.

On the way to the final, Adriano had scored six times. In the final, he saved Brazil with a 93rd-minute thunderbolt and had stepped up, converting his spot-kick to bring home the crown. Adriano had conquered the South American continent and then staked his claim; here he was, the Imperador.

By the time he arrived at the 2004 Copa in Peru, Adriano was 22 and perhaps as physically fit as he was at any time in his career. He had come off the back of a fantastic third season in Italy, one that had earned him a move to Inter Milan for a second time. But he was still not trusted by Brazil’s football-watching public.

In Brazil, a player’s form in European leagues is not always taken into account by pundits and journalists who are more focused on the domestic leagues. And Adriano’s previous performances for the Selecao had not been up to the high standards expected of Brazil’s No.9.

He had made a surprise debut as an 18-year-old in 2000 when he was still playing for Flamengo. After that, he had to wait three years for another cap. It came in the 2003 Confederations Cup in France, where Brazil, the defending world champions, fell at the group stage.

It was deemed an embarrassment and, though he had scored twice in three games, Adriano was slated in the press. Subsequently, he was left out of the squad for the World Cup qualifiers in autumn and spring of the 2003-04 season.

Yet fortunately for Adriano, Carlos Alberto Parreira decided that a young, experimental Brazil squad should compete at the 2004 Copa America, handing him another opportunity.

Having won the World Cup two years prior, taking a second string was seen as an acceptable move by Parreira. As Ronaldinho said at the time: “The Copa America is a very important tournament, but the team needs a rest.”

But even with a young squad travelling to Peru, Adriano’s place in the starting XI was contested. There were plenty who would rather have seen Vagner Love or Ricardo Oliveira handed their chance. But Parreira held firm and Adriano was in the line-up for the first group game with Chile.

He did not score, but there were moments to suggest the young Inter striker could transfer his Serie A form onto the international stage. A free-kick and a powerful shot sailed narrowly wide in the first half and a cross almost created a chance for strike partner Luis Fabiano.

Adriano kept his place for the second match with Costa Rica; this time he was decisive.

Costa Rica started brightly and put pressure on the Brazilians for half an hour. But Parreira’s young players weathered the storm and just before half-time, Adriano’s chance came.

A perfect long pass over the top from Alex found Adriano behind the Costa Rica defence and Adriano cut inside onto that left foot. By then a couple of players had managed to get themselves back onto the line, but the shot was struck with such pure technique that even if they had got between the ball and the goal, they would have been carried into the net along with it.

In the second half, Adriano grabbed two more, a header from a corner and a smart finish from inside the six-yard box. With another from Juan, Brazil ran out 4-1 winners and Adriano had justified his selection. “Our decisiveness is part of Brazilian football,” said Parreira post-match. It was an obvious nod to his young centre-forward.

The next game was lost to Paraguay, but it didn’t matter. With six points, Brazil were through to the last eight, where they faced an experienced Mexico side featuring Barcelona defender Rafael Marques and a slew of others who had made it to the World Cup last-16 in 2002.

The first half was tight. Only a penalty from Brazil captain Alex, which had been won by Adriano, split the sides at the break. Yet as El Tri tired in the final 25 minutes, Adriano came alive. Alex found him in a pocket of space on the edge of the area, just to the left of centre. With time to get a shot away, Adriano sent a low, firm strike into the bottom corner.

The game was won, but Adriano was not finished. With 12 minutes left, a long ball caused a mix up in the Mexico defence and Adriano was there, ready to capitalise. A touch took him past the Mexico ‘keeper and a right-footed finish from a tight angle brought him his fifth of the tournament. Just before the end, he added his first assist to complete the rout, backheeling the ball to a grateful Ricardo Oliveira.

The Uruguayan pressure eventually paid off, though, Marcelo Sosa nodding home a free-kick with 22 minutes gone. Brazil only managed three shots at goal in the first half. “We had a good conversation at the break,” Maicon told Brazilian TV later that evening, “It wasn’t the Brazil that played against Mexico.”

Whatever was said worked. Brazil came out for the second half and looked reinvigorated, Adriano getting the equaliser with a poacher’s finish after a low, hard shot from Luis Fabiano. Then the yellow shirts poured forwards, shots raining in from Adriano, Alex and Luis Fabiano. But a winner did not come. Penalties it was.

Luisao, Luis Fabiano, Adriano and Renato all converted. Then Julio Cesar saved from Vicente Sanchez, giving Alex the chance to send Brazil through. The Fenerbahce legend did not pass it up.

The dream final was set up, Brazil against the favourites, Marcelo Bielsa’s Argentina. A mixture of youth and experience, with Roberto Ayala and Javier Zanetti complemented by Javier Mascherano and Carlos Tevez, had seen Argentina blast through the competition, scoring 14 in their five games.

A Kily Gonzalez penalty after a Luisao foul put Argentina ahead in the first half as Bielsa squatted motionless on the touchline. But before half-time the lanky Luisao made amends, drawing Brazil level as he rose to head home an Alex free-kick.

Nothing could separate the sides for 42 minutes of the second half. Then Cesar Delgado picked up a loose ball inside the penalty area and hammered past Julio Cesar. “That goal has won the cup, because we are so close to the end,” said the commentator on Argentinian channel TyC Sports.

They hadn’t accounted for Brazil’s No.7. As the clocked ticked towards the final seconds of the last minute of three added on, Diego Ribas punted a ball forwards.

Then it happened. As Adriano said in his recent Players’ Tribune piece: “The rest is a poem, man. It’s a movie. It’s a song. I don’t know what it is, but it’s not reality.

“The ball came floating into the box. Confusion. Bodies. Elbows. I couldn’t see shit! If you watch the video, I actually put my elbow up to hit somebody. But then, suddenly, the ball was at my feet. A gift from heaven.”

The Lord’s manna or a slice of luck? Whatever it was, Adriano gobbled it up. He flicked it up to himself, then span and hammered it into the corner of the Argentinian net.

The commentator who had minutes prior been so sure of the cup could muster just four words. “Adriano, te quiero matar” – “Adriano, I want to kill you.”

Penalties again, and Argentina missed their first two. Andres D’Alessandro saw his saved and Gabriel Heinze blasted over. Adriano tucked his away, as did Edu Gaspar, Diego Ribas and Juan. Even with a group of youngsters, Brazil had defeated the old enemy. Adriano was their hero, seven goals in total and a Golden Boot to put on his shelf.

“Argentina came with all these experienced players,” Parreira said after the final whistle, “but our team proved they are capable of overcoming any difficulties.”

For Adriano, unfortunately, the elation of being Brazil star man at a major tournament soon turned to sorrow. Nine days later, his father suffered a heart attack and passed away. Adriano was consumed by the darkness of depression and the decline of his career began.

Two years later, he went to the World Cup and was expected to perform the same way he had in 2004, this time alongside Ronaldo in attack. But by then football had become a burden for him. “It was a lot of pressure to be The Emperor,” he told the Players’ Tribune.

In the end, it was a pressure that his terrible illness stopped him from carrying as well as he otherwise might have.