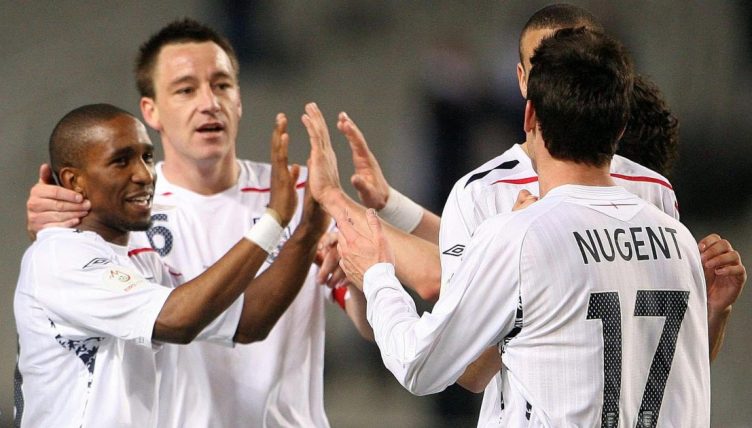 It’s every young footballer’s dream to grow up and represent their country, so who can blame David Nugent for the brilliant piece of sh*thousery on his senior England debut.

Nugent’s international career lasted about 14 minutes in total, but it included a moment which should never be forgotten. Please note: it wasn’t a screamer or anything, it was a goal-line tap in, but it was just so iconic.

The striker, who was performing well with Championship outfit Preston North End at the time, earned a surprise call up to his national side for the Euro 2008 qualifiers against Israel and Andorra.

With the likes of Wayne Rooney and Andy Johnson ahead of him in the pecking order, Nugenet didn’t get to start either of the games, but he certainly ensured he made an impact off the bench against Andorra after not making the matchday squad for the clash with Israel.

There was plenty of toxicity surrounding the national team following the Israel game which ended 0-0, making it five matches without a victory.

Steve McClaren’s side continued to disappoint in Barcelona against Andorra as they were booed off at half-time with the game goalless, but two second half strikes from Steven Gerrard put England 2-0 up 76 minutes into the game. It was just minutes later when McClaren turned to the bench and signalled to Nugent that his international career was about to start.

Upon stepping onto the pitch, he became the first Preston player to feature for England since Sir Tom Finney did so 61 years earlier.

Just moments after entering the game, he received the ball about 12 yards out from Stewart Downing; put it on target and he’d surely have his first England goal.

He fluffed his lines and put the ball wide, probably thinking he’d just missed his one and only opportunity to net for his country.

If he was going to get another half-chance in the game, this no doubt increased his determination to take it. Or as it turns out, he’d just steal somebody else’s.

In the 92nd minute, Jermain Defoe received the ball in the box and his snapshot begun crawling over the goal-line after a touch from the goalkeeper.

Nugent rushed to the ball like a giddy child goalpoaching on the school field. He just about reached the ball on the white of the line, where he slammed it into the back of the net, before turning around with the biggest grin you’re ever likely to see on a football pitch.

Defoe turned away to half-celebrate the goal, but Nugent was not going to let this go without everybody knowing he got the last touch. Defoe gave a little wry smile towards the Preston striker, effectively transmitting his thoughts: “You little sh*t.”

Nugent definitely knew it was a bit cheeky.

“Jermain Defoe had a shot, the keeper saved it, but it went under his body and was rolling into the goal,” he told the Express. “I used my pace to get there just in time before it crossed the line and tapped it in.

“It was going in anyway, but I decided I’d make sure. The pitch was a bit muddy, so it might have stopped in the mud.”

It goes without saying that Nugent has the best minutes-per-goal ratio in England history. He did what any of us would do in the same situation, and that definitely makes him England’s best ever striker.