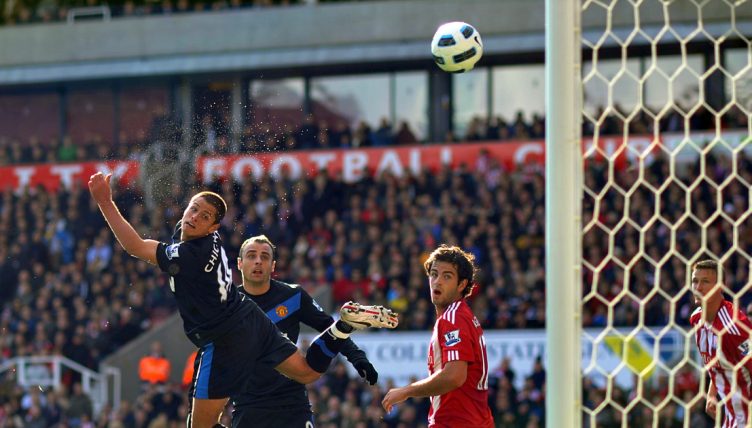 When Javier Hernandez joined Manchester United in the summer of 2010, there was confusion about what you were supposed to call him.

At 22-years-old, he arrived at Old Trafford from hometown club Guadalajara nicknamed Chicharito. Should he be called the English translation, ‘Little Pea’? His surname? And, anyway, why the hell did they sign this guy?

All those questions were answered emphatically when, with Chicharito on his back, the Little Pea scored the most ridiculous goal on his debut, kicking the ball onto his own face and into the Chelsea net after stumbling like a newly born horse.

It was the first of several brilliantly bizarre finishes from the Mexican, for whom the idea of normal was foreign.

The unconventional ran through Chicharito’s blood, and it made him the perfect fit for United.

When the Red Devils rocked up to Stoke during Chircharito’s debut 2010-11 season, they were without Wayne Rooney after the summer had brought with it the latest chapter in a long-winded transfer saga.

Rooney had wanted to leave but Sir Alex Ferguson had told him in no uncertain terms he wasn’t going anywhere and Rooney was having a strop.

But Chicharito had just completed his dream move and was already establishing himself as a fan favourite. To match his Charity Shield goal he had scored the only goal of the game in the Champions League against Valencia and now, with Rooney out of the team, he started against Stoke.

Within half an hour, he scored. In what would become typical Chicharito fashion it was a makeshift moment of magic and a goal few others would have had the creativity to attempt, let alone pull off.

With the scores level at 0-0, the ball was headed across the box towards him from a corner. Hernandez reacted quickest to the knock-on, the ball being high and behind him mere afterthoughts to his instinctive desire to score.

Leaping like a salmon trying to climb up a waterfall, he jumped higher than any Little Pea should be able to do and met the ball at the peak of his jump.

Arching his back in a sharp, snap motion he headed the ball back towards goal and over the flailing arm of the Stoke goalkeeper.

Happy birthday Javier 'Chicharito' Hernandez, scorer of the only backwards header I can recall seeingpic.twitter.com/Gleaz9cbZH

It was a wonderful, ingenious and instinctive finish that was threatened with being all for naught when Stoke substitute Tuncay Sanli fired home an equaliser with nine minutes remaining.

But Chicharito could not let his hard work go to waste. In what would prove to be his modus operandi during his time at United, he struck late on in the 86th minute to give United all three points and mark an incredible performance.

He scored so many vital goals for United across his three seasons playing at the club. Against Blackpool, Aston Villa and Newcastle he scored in comeback wins to name but a few, so many times coming off the bench to inspire or finish off the turnaround.

It made the Mexico international a fan favourite and somewhat of a spiritual successor to Ole Gunnar Solskjaer, who had retired three seasons previous and never been replaced.

Chicharito notched up 20 goals in all competitions in his debut season, the first to do so at the club since Ruud van Nistelrooy.

Thirteen of them came in the Premier League and he also played all 90 minutes of the ill-fated 2011 Champions League final, winning the Sir Matt Busby Player of the Year award.

So many of his finishes were not what you would call normal, with rebounds hitting him and going in without him realising on more than one occasion, but he was a skillful and potent finisher.

Despite the Mexican standing at just 5″9 his eye for goal and off-the-ball movement meant he would often sneak into the box unmarked to head home.

When sent through on goal, his right foot was deadly and he possessed a unique tendency to lean back on his left foot while stretching his right as far as he could to wrap around the ball and send it beneath the goalkeeper.

Chicharito with the goal in under a minute against Chelsea on a day where #mufc sealed the title 🥰❤️ pic.twitter.com/3WuKDd1wKf

The 2011-12 season saw him battle several injuries, but he still had time to score 10 league goals and snatch a late equaliser at Anfield, running across to the traveling fans as if he could make them love him any more than they already did.

You could be so bold as to suggest that if United had a fully fit Chicharito that season, the 2011-12 title would have stayed on the red side of Manchester and the Sergio Aguero moment wouldn’t have had a chance to happen.

The next season would see him return to full fitness and the title return to Old Trafford, scoring 10 but also assisting seven in the league.

It could be argued his tenacity, habit for late goals and super-sub status made him one of the most Sir Alex Ferguson players ever. How fitting, then, that he scored United’s last goal under the Scot against West Brom on the final day of the 2013 season.

That could also explain what happened next as, despite being a vital part of the squad under Ferguson and having one of the best goals to minutes ratios in Premier League history, Chicharito grew frustrated with David Moyes’ persistent decisions not to include him.

When Louis van Gaal seemed to have few plans for the Mexican, he went on loan to Real Madrid and moved to Bayer Leverkusen on a permanent deal in 2015, one of the transfers many United fans still resent, bringing to an end a truly prolific stint with the Red Devils.

He was twice top goalscorer at Leverkusen and netted 17 times for West Ham across two seasons. At LA Galaxy, at the age of 33, he has refound some of his most prolific form with 17 goals in 21 MLS games.

Across his international career, he scored at three World Cups and became Mexico’s all-time leading goalscorer, a remarkable achievement considering his nation’s long love for football.

So here’s to the Little Pea, an unconventional striker with huge amounts of conventional success. Gracias, Chicharito.