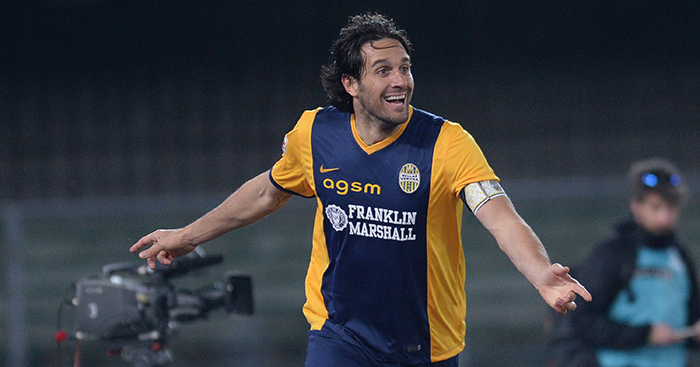 During the 2014-15 season, Italian striker Luca Toni became Serie A’s oldest ever top scorer, knocking in 22 goals for Hellas Verona at the age of 37-38.

What do you hope to achieve by the age of 38? For most of us, the idea of pushing 40 provokes little more than a wish to consolidate losses.

Turning 38 is not a time for setting and achieving new goals; it is a desperate slog to hold onto relevance, dignity and hair.

If your ambitions at 38 stretch beyond timely mortgage repayments, you’re probably a sociopath.

Being 38 brings other problems, too.

For example, at 38 — sometimes long before 38 — you lose the ability to properly discern one cut of jeans from another. And with that comes a dilemma: obstinately stick with the style that was fashionable in your 20s, or try to mimic young people, becoming, in all probability, someone like Kevin Spacey in American Beauty.

To emphasise: this is a lose-lose situation. Sooner or later, you will become an embarrassment to yourself and your family, and denim will be to blame. You cannot fight it.

At the age of 38, with a full head of hair to boot, Luca Toni became the oldest player to top the Serie A scoring charts, plundering 22 goals for lowly Hellas Verona. 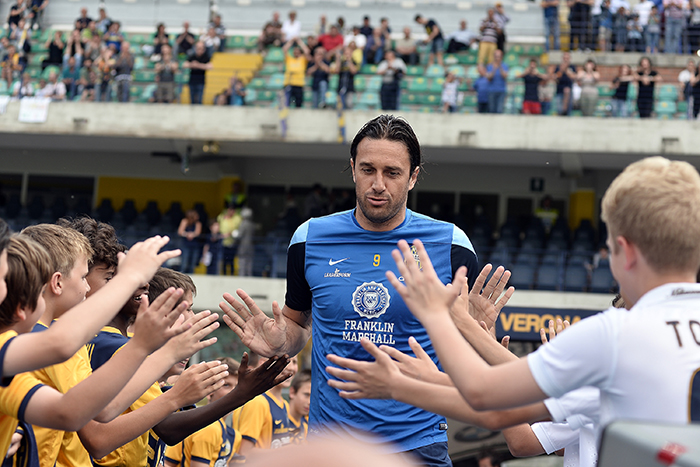 It was an incredible feat — of skill, of longevity, of kindness to other 38-year-olds seemingly on the verge of obsolescence.

Toni’s glorious twilight season is an inspiration. Not only to handsome strikers with tree-trunk thighs but to anybody scared of losing their youth.

Playing for Fiorentina at the time, the big striker appeared in every match of the Serie A season, scoring 31 goals and, for the first time in his career, earning the title of Capocannoniere: the league’s top scorer.

He didn’t just top the Serie A scoring charts either: his tally of 31 was higher than that of any other player in a European top division, and he was consequently given the European Golden Boot.

He won the World Cup with Italy that same summer.

At that point, Toni was 29 years old. Even for a target man, even for an Italian target man with childlike complexion and robust hairline, one might have expected him to be reaching his peak years, perhaps with one eye on retirement.

Things surely wouldn’t be getting much better for a forward approaching his thirties. Would they?

In a sense, they would. While Toni would not feature at another World Cup, his goalscoring touch would not desert him.

Two years later, at the age of 31, he was the top scorer in both the Bundesliga and UEFA Cup with Bayern Munich.

Although Toni’s goalscoring with Fiorentina and Bayern Munich was impressive, it wasn’t exactly defying science…yet.

A six-foot-four poacher with two strong feet and an even stronger head, Toni possessed the attributes to play at an advanced age; for him to excel at 31 was almost par for the course.

After that sparkling first season at Bayern, however, time appeared to be taking its toll.

Between 2009 and 2013, as Toni went from a fresh 32 to a creaky 36 (and suffered a family tragedy in the meantime), his strike rate gradually decreased.

Roma: 5 goals. Genoa: 3 goals. Juventus: 2 goals. Al Nasr: 3 goals. Even back in the purple of Fiorentina, a 35-year-old Toni found the net a modest eight times in 27 Serie A matches.

Toni’s early-to-mid-thirties could thus be described as unspectacular but dignified.

This was a man hanging up his metaphorical skinny jeans and enjoying the adult roominess of 501s. Nobody was laughing at him for doing so, but he certainly wasn’t being invited to cool parties anymore.

But then something changed.

When Toni, aged 36, signed for newly-promoted Hellas Verona in July 2013, few expected him to be much more than a squad player.

The club already had a dependable goalscorer in the shape of Daniele Cacia, and Toni’s arrival appeared to be an investment in dressing-room experience as much as on-pitch ability.

For Toni himself, however, the move to a smaller club represented a change in personal philosophy.

“I have earned so much in my career; I don’t play for money,” he told La Gazzetta dello Sport in August 2013.

His new motivation? To be a “protagonista” — a key figure, a leading man — for his new team.

Toni’s return to form was as spectacular as it was unexpected. Over the 2013-14 Serie A season, the striker scored 20 goals and helped Verona to an unlikely 10th-place finish.

It was his biggest goalscoring return in six years.

The following season, aged 37, he would do even better. With 22 goals over the campaign — including a final-weekend strike against former club Juventus — Toni topped the Serie A scoring charts alongside Inter’s Mauro Icardi.

A whole nine years after winning the Capocannoniere title with Fiorentina, Toni had done so again — becoming the oldest player in Serie A history to do so.

Toni probably wishes he had ended his career then and there. As it happened, he played another season at Verona in which the club finished bottom and was relegated.

There would be some consolation, though: during Verona’s final home match of the 2015-16 season — again against Juventus — Toni scored the 324th and final goal of his career, departing the pitch to a standing ovation.

Upon his retirement, Toni was labelled “the last great Italian centre-forward” by Gazzetta.

Of course, his late-career purple patch may not seem so remarkable within the context Serie A, since plenty of players — Maldini, Pirlo, Totti, etc. — have played well into their thirties at the highest level.

But while legends like Totti generally see their playing time decrease with their advancing years, taking on a role somewhere between player and on-pitch ambassador, Toni’s contributions remained substantial.

Even after six seasons of supposed decline, the striker was able to bang in the goals with little regard to sentiment or status.

In other words, Toni’s wish to become a 38-year-old protagonista came true.

And to Fiorentina fans, to Verona fans, to a generation thirty-somethings who think it’s time to stop dreaming, he remains an inspiration.

A tribute to Ariel Ortega, a frustrating rebel you couldn’t help but love