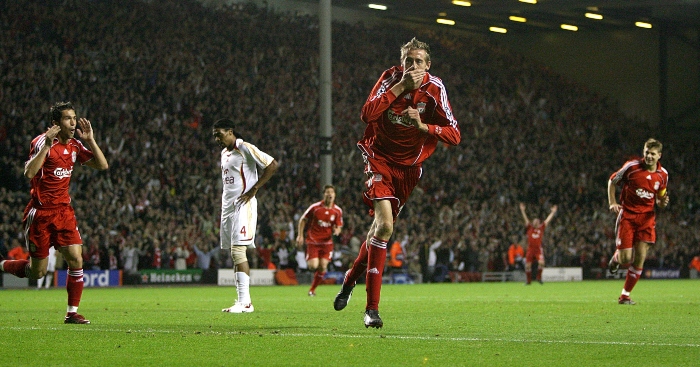 You’d be hard pressed to find many football fans who don’t have fond memories when they hear the name Peter Crouch.

When asked what he would have been if he didn’t become a footballer, Crouch famously replied: “A virgin.”

A self-deprecating player who often talked disparagingly of his own ability, Crouch resonated with fans. He loved the game, he played for the badge, and most of all he had fun doing so.

The 6ft 7in striker may not have looked much like a footballer, but you don’t score 100 Premier League goals without possessing a bit of ability. He wasn’t just a good lad, he was a bloody good player too.

And, like for every other club he played for, Crouch did not take long to endear himself to Liverpool fans – despite starting his career at Anfield with a pretty worrying goal drought.

And once Crouch got into full flow and did start scoring, he was a tremendous asset for the Reds. His career at Liverpool may not have spanned the length of some of their all-time great strikers, but he certainly provided some memorable moments in his three years at the club.

The phrase ‘good touch for a big man’ was never more relevant than when applied to Crouch. A priceless asset due to his towering height, Crouch was also extremely gifted technically, evidenced by some of the audacious goals he scored in a Liverpool shirt.

But it wasn’t all plain sailing in his time on Merseyside, with 19 games and four months passing before Crouch opened his account for Rafael Benitez’s side. His all-round play ensured his place in the team, but that all-important first goal continued to elude him.

Strikers often say they just need a lucky break during such runs, and Crouch certainly got that when finally getting off the mark against Paul Jewell’s Wigan at Anfield. The set up was great, Crouch taking a ball on his chest just inside his own half, turning and heading towards goal, but the shot itself was driven straight at the defender. It was Crouch’s early Liverpool form summed up in one move.

Except this time the Gods were on his side as the ball spun high into the air and towards goal, with goalkeeper Mike Pollitt making a hash of keeping it out of his net and Crouch able to celebrate manically.

The wait was finally over for @petercrouch as he scored his 1st and 2nd #LFC goals against Wigan #OnThisDay in 2005. @LuchoGarcia14 also bagged one in the 3-0 win at Anfield #OTD pic.twitter.com/mxwhMcJnaL

While his first goal was fortuitous, his second in the same game was sublime as he expertly lifted the ball over the helpless Pollitt, and despite a desperate attempt to clear on the line, the ball trickled into the net.

After going over 24 hours of football without a Liverpool goal, in December 2005 Crouch scored seven of them. Following a difficult start, he was beginning to find his size 12 feet, and he only got better.

You’d expect a large proportion of Crouch’s goals to come from his head, and with 53 of his 108 Premier League goals headers, more than any other player, Crouch was clearly a threat in the air. But Crouch is also fond of the wonder goal and scored not one but two of them for the Reds at Anfield.

The first, against Galatasaray, came from a right-wing cross from Steve Finnan. Crouch was no doubt preparing himself for a header but quickly realised the ball was set to arrive behind him and adjusted himself for a scissor kick.

Crouch has always tried them a lot more than most people might assume, and on this occasion he caught it perfectly and sent the ball rocketing past the keeper, who was left rooted to the spot. Described in commentary as “a once in a lifetime goal”, Luis Garcia’s shocked hands-on-head reaction suggested he felt the same.

What’s your favourite Crouch moment in a Liverpool shirt?

It will definitely take something special to beat the bicycle kick against Galatasaray.

Just a season later, Crouch proved them both wrong.

It’s one of those goals that 99 times out of 100 you’d shin straight into the stands. Most would take the ball down before steadying themselves for a shot. However, for Crouch, he proved that the strike against Galatasaray was by no means a fluke.

This time from Jermaine Pennant’s ball into the box, Crouch got himself into a similar position before producing almost a carbon copy in front of the Kop.

To manage such a goal twice illustrates just how much technical ability Crouch possessed. Despite the habits of those behind him, he was not just a ‘lump it up to the big man’ sort of striker but one that could turn a half chance into an incredible goal.

On this day in 2007, Crouch and Gerrard scored stunning goals in a 3-0 win over Bolton pic.twitter.com/1q3IMfMjmN

Crouch produced some outstanding performances in his time with the Reds, but none more so than his hat-trick in a 4-1 thrashing of Arsenal at Anfield in March 2007.

It took just four minutes for Crouch to break the deadlock. The striker made a darting run towards the near post in order to convert Alvaro Arbeloa’s right-wing cross, powering the ball in from close range.

His second could be considered a classic Crouch goal. Left-back Fabio Aurelio flighted in an enticing cross for Crouch to attack, and he towered above the defender to bullet a header into the top-left hand corner.

He completed his hat-trick just nine minutes from time, taking two outstanding touches to shift the ball onto his left foot, before calmly lifting it over Jens Lehmann.

Right-foot, header, left-foot: the perfect hat-trick. On that form, he could worry any defence in the world. And 18 goals that campaign proved to be his best goalscoring season at Liverpool.

Crouch departed Liverpool in the summer of 2008 as opportunities became limited following the arrival of a certain Fernando Torres, swapping Merseyside for a return to Portsmouth to join up with Harry Redknapp in a deal worth £11million.

A favourite everywhere he played, Crouch’s passion for football and self-deprecating humour was what fans loved about the striker. Chants of “he’s big, he’s red, his feet stick out the bed” could often be heard around Anfield.

But 42 Liverpool goals, as well as a very impressive return of 22 goals in 42 games at international level, showed that for all he brought off the field, he wasn’t too bad on it either.