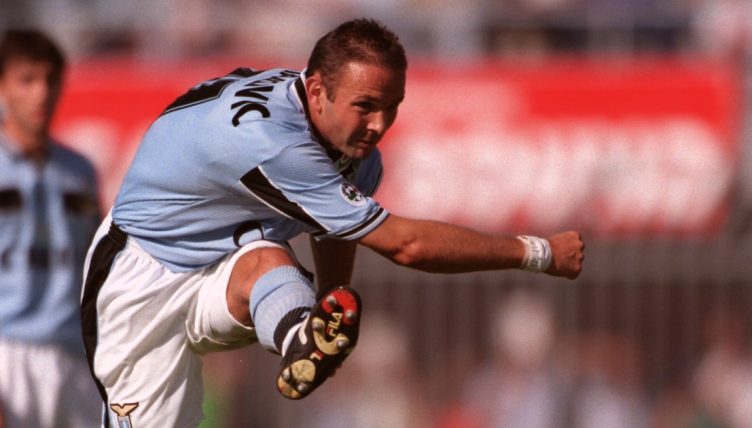 As a player Sinisa Mihajlovic never liked football all that much and, for the most part, the feeling was mutual.

Racism, spitting and kicking out at opponents were, unfortunately, all epitaphs associated with the Serbian’s legacy in the modern game.

But there was another side to Mihajlovic too. One that came to the fore the minute a referee blew for a free kick in his team’s favour. Simply put: Mihajlovic lived for dead ball situations.

“I played football for the free-kicks,” he once said. “I didn’t like football all that much, but the free-kicks were great. For me, a free-kick is football. If there hadn’t have been that, I might not have played.”

Without free kicks, Mihajlovic may have ended up another run-of-the-mill thug to be swept under the rug with the rest of football history’s charmless malcontents. But that magic wand of a left foot made sure he will always be remembered for so much more than that.

A Day to Remember

Saturday, December 12, 1998 was certainly a day to remember for Serie A’s biggest and brightest stars.

It was a day that saw Gabriel Batistuta grab the winner for league leaders Fiorentina against old rivals Juventus while Ronaldo and George Weah proved the difference with late goals for Inter and AC Milan respectively. Hernan Crespo even got in on the act with an eighth goal of the season for high flying Parma, against AS Roma, no less.

Yet for all the star names on display that day, one shone above all others: Mihajlovic. A few months earlier, Lazio had shelled out a not inconsiderable £8.5 million to bring the Serbian to the Stadio Olimpico.

Arriving in the heady, big-spending days of the Sergio Cragnotti era, Mihajlovic had been identified by then-manager Sven-Goran Eriksson as one of the last missing pieces in Lazio’s pursuit of a first Scudetto since 1974.

He joined the club during a summer of hectic transfer business with Marcelo Salas, Sergio Conceicao, Ivan de la Pena, Fernando Couto, Christian Vieri and a young Dejan Stankovic all joining the club during the off-season.

Mihaljovic was already a European Cup winner by the time he joined Lazio, but he arrived at the club with something of a point to prove.

READ: A tribute to Hernan Crespo, once the most expensive footballer in the world

‘The two worst seasons of my entire career’

Despite winning the continent’s highest club honour with Red Star Belgrade in 1991, the Serbian had endured a difficult first foray into Serie A after joining Roma a year later.

Mihajlovic would later describe his time with the Giallorossi as “the two worst seasons of my entire career” under compatriot Vujadin Boskov and his successor Carlo Mazzone.

He arrived in Italy as an attack-minded left-winger, the scorer of two decisive goals in a Red Star’s memorable European Cup semi-final victory over Bayern Munich yet found himself shunted out to left-back by Boskov and shifted into defensive midfield by Mazzone.

His fortunes changed, however, in the summer of 1994 when Eriksson, then manager of Sampdoria, came calling. Eager to harness the same defensive leadership and tenacity that had convinced Boskov and Mazzone to re-calibrate Mihajlovic’s role for Roma, Eriksson hit upon the idea of deploying the Serbian as a sweeper.

It was a role Mihajlovic took to with aplomb, allowing him to juggle defensive responsibilities, with a penchant for pin-point cross-field passing and spectacular shots from distance. Over the four seasons that followed, he also enhanced his already burgeoning reputation as a dead ball specialist.

Born to a Serbian father from Bosnia and a Croatian mother in Borovo Naselje, Mihajlovic spent his formative years honing his craft not so much as a footballer but rather a free-kick specialist.

“When I was little, I didn’t like to play football, only kicking the ball,” he once explained. “Every day I would travel two kilometres by foot to arrive at a pitch with a big goal, but with no netting. I’d kick it, have to run back to get the ball and start all over again. After that, I practised on the garage door and put so many dents in it. For four to five hours, I would continuously keep kicking, non-stop.”

That practice made Mihajlovic close to perfect when it came to dead ball scenarios. Whether thumped, curled or drilled with precision, the Serbian had the skill to score from almost any position – he would often even try to score directly from corners.

Siniša Mihajlović is one of the best players from long range.

This guy was magnificent from set pieces. Each goal he scored got better and better.

As a free-kick taker, Mihajlovic had made his mark with both Roma and Sampdoria, scoring a memorable effort for the Giallorossi against Borussia Dortmund in the 1992-93 UEFA Cup and adding another to his collection for La Samp against AC Milan in the 1994 Supercoppa Italiana.

Yet it was with Lazio on that Saturday in December that Mihajlovic etched his name into Serie A legend after scoring a hat-trick of free-kicks against his former employers Sampdoria, no less.

Though he had enjoyed his time with the Blucherati, after four trophyless seasons at the Genoa club, Mihajlovic had been convinced to jump ship and join Erikson in Rome. It paid off almost immediately with Lazio winning the Supercoppa Italiana 2-1 against reigning champions Juventus just a few weeks into his tenure.

Yet the Biancocelesti would go on to make a slow start to their domestic campaign, winning just three of their opening 11 Serie A fixtures. By the time Sampdoria visited the Stadio Olimpico, the team had started to course correct and came into the game off the back of an impressive 1-0 win away at Juventus.

Still languishing down in sixth, some eight points off leaders Fiorentina, it was time for someone to make a statement. That someone would be Mihajlovic.

Mihajlovic scored 38 goals throughout his Serie A career with 28 of them being free kicks. Only Andrea Pirlo has scored as many from dead ball situations while only one other player had bagged a hat-trick of free-kicks in Serie A.

The fact that man was living Lazio legend Beppe Signori only added to the impressive nature of Mihajlovic’s feat. A three-time Cappocannoniere, Signori had become the first player to score a hat-trick of free-kicks when Lazio faced off against Atalanta in April 1994.

Yet two of his three had come via a touch and drive, with the final via the Italian’s one-step shooting style. Whisper it quietly but Mihaljovic’s hat-trick was arguably superior.

Turning out against a Sampdoria team coached by a young Luciano Spalletti, with the iconic Pierluigi Collina refereeing the game, it took Mihajlovic 29 minutes to take centre stage in front of the Lazio faithful.

With the spectre of Catenaccio still casting its shadow over the Italian game, Sampdoria did not shy away from any attempt at blunting Lazio’s impressive array of attacking talents that day. Tactical fouls were evidently a part of Spalletti’s blueprint to success against Eriksson’s team. Pep Guardiola would have been proud.

Yet such an approach would prove catastrophic on this occasion. As the game edged towards the half-hour mark, Roberto Mancini was felled and Mihajlovic lined up a free-kick just outside the Sampdoria box, just to the right of the D.

This first free-kick was all about placement, with Mihajlovic tasked with lifting the ball over the wall and back down on target from relatively close range. The resulting strike achieved those ambitions with the Serbian sending the ball just beyond the despairing gloves of Fabrizio Ferroni in the Blucherati net. Mihajlovic barely celebrated, perhaps out of respect to his former employers but more likely because such strikes were second nature to him.

Though Sampdoria would level things up on 37 minutes with a penalty from Francesco Palmieri, when Lazio won another free-kick on the stroke of half-time, with De La Pena was brought down after a mazy run, Spalletti must have feared the worst.

This was prime Mihajlovic range: a little further out, to the right of the Sampdoria penalty area. If the opener had been about precision, the second was all about the finesse. From behind the goal, the Serbian’s strike appeared, initially at first, to be heading almost directly at Ferroni, before curling delightfully away and into the far corner of the net. It was a sign of the shot’s brilliance that Ferroni, at full stretch, could not get a hand to it.

This time Mihajlovic was able to muster a smile. When Matias Almeyda was brought down with the clock ticking towards 52 minutes, Mihajlovic must have been positively giddy. That certainly appeared to be the case if TV pictures were to be believed, with the Serbian spotted gesturing the number three with his hand to the Sampdoria defence.

The fact it was further out suited the Serbian’s skills further. If the first free-kick had been about placement and the second was a tale of finesse, the third was pure power. Mihajlovic’s shot was a scud missile of a strike, fired off after a long run-up that sent the ball looping in from the left over the wall and beyond the increasingly shell shocked Ferroni.

Mihajlovic found himself mobbed by his teammates soon after, while the Laziali in the Olimpico rejoiced and Eriksson applauded from the touchline. It was telling that after each goal, Mihajlovic ran over to the Swede to exchange a high five and a word of encouragement, such was their bond as player and manager.

As Good As It Gets

The goals continued to flow that day. A second Palmieri penalty helped La Samp get back into the game before strikes from Stankovic and Salas put the game beyond doubt.

Sampdoria vs Lazio had been the first game broadcast on Channel 4 as part of the broadcaster’s Football Italia coverage back in 1992. It ended 3-3. Seven years on, the fixture continued to entertain, albeit for slightly different reasons.

This was Mihajlovic’s moment and eventually it would be Eriksson and Lazio’s too. Despite missing out on the Scudetto in 1999 by a point to a resurgent Milan, the Biancocelesti would take home the European Cup Winners Cup that season before going on to secure a domestic double a year later and a first Scudetto in 26 years with Mihajlovic weighing in with 21 goals over the two campaigns.

That would be as good as it ever got for Eriksson, Lazio and maybe even Mihajlovic.

The Swede would head off to England for an ignominious stint in charge of the national team while the Cragnotti era would crumble too when it became apparent the Lazio owner was writing cheques he simply couldn’t cash.

Mihajlovic remained in Rome where he would win one final Coppa Italia before moving on to Inter Milan where he earned a plethora of trophies as a Nerazzurri bit-part player. He hung his boots up in 2006, having scored an impressive 99 career goals.

None of those 99 will ever quite match the collective genius of those three dead-ball strikes though. Offering a glimmer of the frustrated genius that lay beneath so much of the bad that dominated Mihajlovic’s career, this one game remains a perfect capsule of an imperfect man performing at his peak in what was the greatest league of all.

Mihajlovic played football for the free kicks and it’s a good job he did.