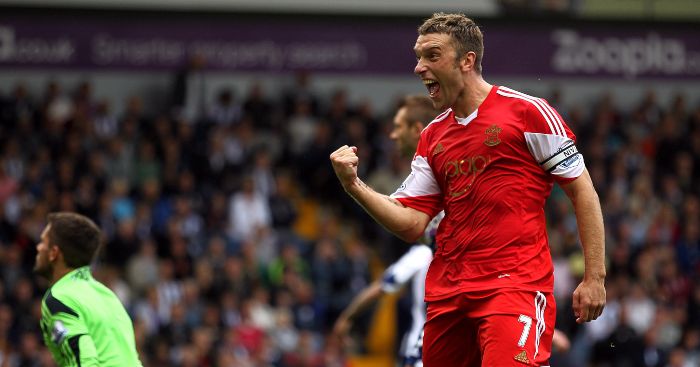 The opening day of the 2012-13 season pitted Manchester City, fresh from their remarkable ‘Agueroooo’ title-winning season, against newly-promoted Southampton.

Nigel Adkins’ side had gained back-to-back promotions to return to the Premier League, thanks in no small part to Rickie Lambert scoring 27 goals for the Saints on their way to Championship glory the previous season. So Adkins’ decision to name the 30-year-old on the bench raised the eyebrows of supporters.

But just as he’d done all his career, Lambert was determined to prove any doubters wrong.

With Southampton trailing 1-0, it came as little surprise to anyone who was aware of Lambert’s goalscoring ability that just four minutes after entering the field, he curled home a loose ball on the edge of the City box to open his account for yet another prolific season.

For a man who had worked in a beetroot factory to fund his travel in his early footballing days and had been playing in the fourth tier at age 24, this moment was testament to the hard work and determination that helped him climb his way through the leagues.

Lambert is one of few footballers in the modern game who resonate with supporters thanks to a real rags to riches story, with his equaliser ensuring that he had netted in all four of England’s top divisions.

He may have been late making his mark on English football, but Lambert’s legacy will live on following his retirement, none more so than with Southampton supporters, for the memories and goals he provided while on the south coast.

Having spent four months out of the game as a youngster, Lambert plied his trade at Macclesfield, Stockport, Rochdale and finally Bristol Rovers before his £1million move to the Saints.

He may have spent a healthy proportion of his career in the lower leagues of England, but what was never in doubt was his ability to find the net. He may not have been blessed with sheer pace or trickery, but what Lambert could do was strike fear into opposition defences, and given half a chance, the outcome was inevitable.

If Lambert were to have dropped out of the game, it would have been a huge travesty for English football reflecting on his achievements. But once he was in the Premier League, Lambert was determined to stay there and stamp his authority on the division, and that’s exactly what he did.

Like Jamie Vardy in his journey through the leagues, Lambert’s goalscoring knack ensured he was able to cause problems for any defence he came up against.

And after an eventual 3-2 defeat on the opening day against Manchester City, it was just two weeks until Lambert found the net again, this time against the other half of Manchester. He climbed highest, bullying Rafael to bullet his header home to give Southampton the lead, again in a 3-2 defeat.

Lambert was proving that he was able to cut it with the best, netting against some of England’s most illustrious clubs. Most notably, Lambert struck in both Premier League fixtures against Chelsea. While the first at Stamford Bridge was a typical Lambert finish, heading in expertly from a right-wing cross, the second was quite sublime.

Stepping up for a free-kick fully 30 yards out, Lambert whipped an outstanding right-footed strike past Petr Cech to score on his 500th career league appearance.

#Throwback to that incredible Sir Rickie Lambert free-kick vs Chelsea! What a way to mark your 500th league career appearance! #SaintsFC pic.twitter.com/chF5UViXyI

It was also the season that Lambert was to net his 100th goal in the red and white of Southampton, getting across his man at the front post to drill home from Adam Lallana’s right-wing cross against Newcastle, an outstanding achievement when you consider it was just his fourth season on the south coast.

His second season in the Premier League was to begin in similar vein to the first, as Lambert struck the winner from the spot two minutes from time at West Brom to maintain his 100% penalty record or the Saints, which eventually finished as 34 from 34.

Three days prior to that season opener, Lambert made his England debut and it could hardly have gone more perfectly.

Facing up to arch-rivals Scotland, Lambert replaced all-time England leading goalscorer Wayne Rooney with the scores locked at 2-2. Just 163 seconds later, he headed home the winner with his first touch in international football.

It may have been a brief international career, but for a man who had been screwing tops onto jars of beetroot as a youngster to afford to remain in the game, he can feel pretty damn proud just to have represented his country, never mind scored on his debut.

And as well as England recognition, Lambert’s form for Southampton was such that in 2014 he signed for Liverpool, the club he had been released by as a youngster.

Born on Merseyside, Lambert’s dream was always to play for Liverpool, but his career with the Reds failed to take off as he would have hoped. With just three goals in his one season at Anfield, the dream did not go as expected.

But he will always have that Southampton spell.