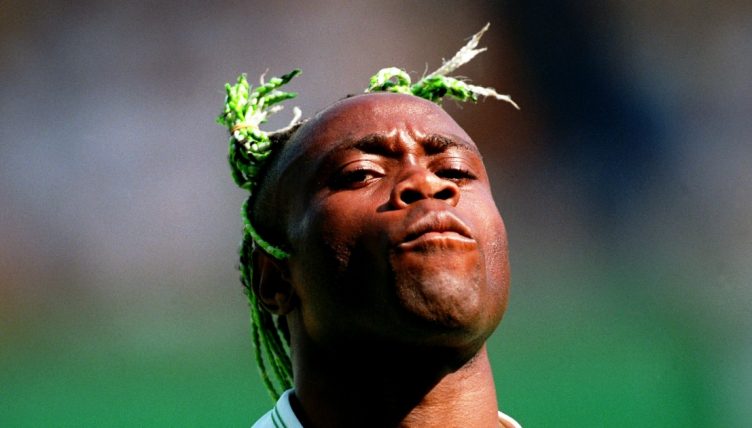 A list of some of the defenders Arsenal legend Thierry Henry faced during his career includes Paolo Maldini, Fabio Cannavaro, Carles Puyol and Jaap Stam.

All monsters of the game, who helped define the art of defending during their careers, but none were selected as the toughest opponent Henry ever faced.

Instead, the French forward claimed another defender gave him his toughest examination. “For direct opponent, I would go back in the days – Taribo West,” Henry said.

“Because [at Auxerre], they did man-marking. He followed you everywhere, even in the dressing room.”

Taribo West. Just the mere mention of his name brings back fond memories of Championship Manager 01/02 – a cult footballer for a cult game.

And whatever the defender lacked in pace and finesse, he more than made up with his hard-tackling, commitment and surging forward runs. Coupled with an eye-catching haircut, West was a must-have.

In an era where defenders are wannabe Beckenbauers, here was a player who simply relished getting stuck in. Andrei Kanchelskis would testify to that.

It’s Taribo West’s birthday, so here he is removing Andrei Kanchelskis from his ankles.

But there was more to West’s career than Championship Manager acclaim. After all, Cherno Samba is conspicuous by his absence from conversations about the best forwards of the 2000s.

Whereas West played across Europe, including spells at both Milan clubs, and became a household name across the world due to his impressive performances for Nigeria at France ’98.

It was in France where his career took off, even if the deal that took the defender to Auxerre in 1993 left him feeling short-changed.

“I played in Auxerre for free,” West said in 2018.  “I was playing under a contract for five years without knowing the content and conditions binding the contract.

“After the third year, Arsenal, Juventus, Glasgow Rangers and Sevilla Betis came for me.

“I went to the coach starting that I wanted to leave but he sat me down and showed me my contract terms with Auxerre. I saw the details of what I had signed. Where my fellow defenders were earning as high as 120,000 French francs, I was going home with 3000 French francs.

“I wanted to set Auxerre on fire that day. Immediately, I called my manager who was turning me left and right [while] enjoying himself in Senegal.”

Instead, West knuckled down and played some of the best football of his career, helping Auxerre reach the Champions League quarter-finals in 1996-97, and earned himself a move to Inter Milan.

And, despite being sent-off during the final against Lazio, he won the UEFA Cup in his first season in Italy and played alongside the likes of Ronaldo, Javier Zanetti and Youri Djorkaeff.

But he eventually fell out with manager Marcello Lippi. Striker Christian Vieri recalled: “Lippi gave the jerseys to the starters for the match, and Taribo did not get one. The coach then says to the starters to begin warm-up.

“Taribo said to Lippi: ‘Mister, but God told me I have to play’. Lippi responded, ‘God did not tell me anything’.”

It was an early indication of the faith that would dominate West’s post-football career but, for now, he switched to AC Milan in the early months of 2000.

Things got weird there too. In an interview with Score Nigeria, West claimed: “The Mafia would do anything in their powers to make sure I was done away with at Milan. They cooked a vicious story in the press that I was injured in the desperate bid to send me out of Milan.

“The doctors were bribed to say I was injured, but it was a lie,” he continued. “They did that because they felt it was unthinkable for an African player to take the place of those three ageing defenders, Franco Baresi, Alessandro Costacurta and Paolo Maldini.

“Liverpool came with an offer, but at the end of the day I had to settle for Derby County”.

That move to Pride Park was semi-successful; West helped Derby avoid relegation but was released in 2001 after prioritising Nigeria call-ups over his club commitments.

His nomadic career wound down, including a five-game spell at Plymouth and being rejected by Kevin Keegan’s Manchester City, before West found his true calling.

After retiring in 2007, he embraced his Christianity, became a pastor and opened up a church in Lagos. West has since denounced the lavish lifestyle he enjoyed as a footballer and symbolically cut his trademark locks.

The change of career came as no surprise to some. “We were playing at Pride Park, I cannot remember who it was against, and Taribo shouted something at me,” former Derby team-mate Chris Riggott recalled.

“I said something back and just thought that was the end of it but he practically pinned me up against the wall when he came into the dressing room at half-time and said ‘you are not welcome in my church’.

“It was a bit of an odd one, but in Taribo’s world that was the biggest thing he could say against me.”

“I don’t know why people decline to talk about their involvement with charms,” West himself admitted. “Football has to do with a lot of powers. When there are big events, you look at the stadium, you see people, fans invoking all kinds of things; magicians are there, voodooists are there.”

Fanatical are offering 25% off Football Manager 2023 and you can get an extra 5% off total discount 30%) using the discount code PLANETSPORT.
Speaking further, Taribo said, “In my playing days, when I was ignorant, I used to get some mallams and babalawos [traditional doctors] to make charms for us, which we took to [national] camp. Sometimes it worked, sometimes it didn’t.”

To summarise, his choice of post-career vocation only serves to enhance West’s standing as a cult figure during the late 90s and early 2000s.

This was a man who didn’t give a solitary eff about what anybody else thought and followed his own path during his successful career.

During an era where being yourself is simultaneously encouraged and discouraged, that self-belief should be applauded.

It also helped if you can man-mark Henry into oblivion too.