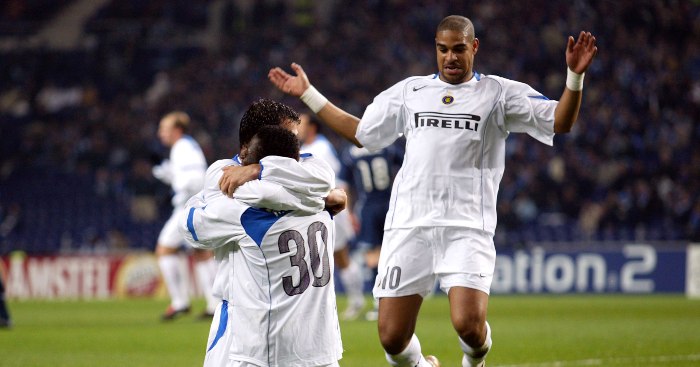 FIFA may be the dominant force in football gaming today but there was once a time when Pro Evolution Soccer led the way – 2005, to be precise.

That was the year PES fans, as they were more commonly known, enjoyed the two best titles in the Konami soccer simulation franchise.

Pro Evolution Soccer 4 was the first PES title to feature officially licensed leagues and teams with the Eredivisie, La Liga and Serie A all present.

But it was Pro Evolution Soccer 5 that featured in arguably the greatest team that never was: Inter Milan.

The Nerazzurri had gone 17 long years without a Serie A title at this point. A UEFA Cup or Coppa Italia aside, owner Massimo Moratti’s millions had yet to translate into domestic dominance for Inter.

His spending did, however, end up blessing anyone playing as them on Pro Evolution Soccer 5 with a remarkable squad to choose from. So at least there’s that.

A team of impressive individual talents, Inter’s mercurial misfits may not have combined to title-winning effect in real-life but in the digital world they were second to none.

Some of it may also have been down to Shingo ‘Seabass’ Takatsuka, the legendary Konami developer behind the game who was rumoured to be an avid Inter supporter.

Lining up in the default 4-2-2-2 formation, here is that classic line-up revisited in full.

Often unfairly cast in the shadow of Gianluigi Buffon, Toldo was a superb shot-stopper for Fiorentina and Inter Milan in his pomp. Most Italy fans remember him as the goalkeeper who let Sylvain Wiltord’s last-gasp equaliser slip under his crisp packet grasp in the final of Euro 2000.

However, he was a reliable pair of hands on Pro Evo, where his quick responses and impressive balance ensured Inter avoided the kind of Fabian Barthez-style errors that dogged many a decent keeper on the game.

Zanetti was nicknamed ‘El Tractor’ in real-life, on account of his ability to bomb up and down the wing for the Nerazzurri, aiding attack and defence.

Those attributes remained true, but on PES he was more like a Rolls Royce, and as effortlessly slick as his trademark hairstyle. Zanetti was fast, rarely ran out of puff and could pass, shoot and tackle like a bastard.

He also boasted impressive stats for things like ‘mentality’, ‘consistency’ and ‘condition’, which meant he rarely got injured and never lost his head. He was basically the anti-Wayne Rooney. 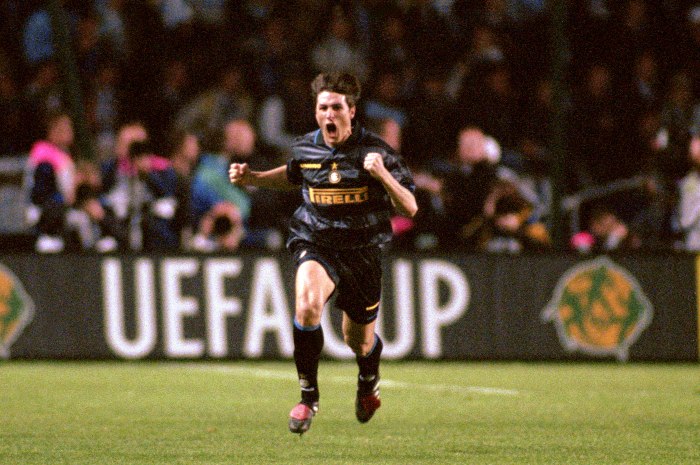 On the game, as in real-life, Cordoba carried himself with the air of someone who ate bowls of nails for breakfast. He also boasted a unique set of skills, to paraphrase Liam Neeson, skills that made him a nightmare to play against.

For one thing, he was bloody fast. So even if a player did get past him, the Colombian had the pace and tackling ability to ensure they lived to regret it.

He was also crazy good in the air, boasting impressive heading and jumping stats that ensured he usually won headers and was a nightmare to defend against from corners.

Konami blessed Samuel with a terrifying thousand-yard death stare to rival wrestling legend The Undertaker. He played a bit like the WWE icon too, serving as fearsome human brick-wall at the back for Inter with few, if any, opposing getting passed him.

Defending was a lot easier with Samuel in the Inter ranks. The Argentine was blessed with special abilities in marking and covering that ensured he was always in the right place at the right time.

There was also something of the Phil Nevilles about Cristiano Zanetti.

He wasn’t related to Javier Zanetti. They weren’t even from the same country let alone the same continent. But Cristiano had the air of a moderately talented younger brother.

The Italian was solid. He wasn’t a natural full-back but you stuck him there because he had good stamina and could defend a bit.

There would be the occasional mistake – Inter evidently had an issue at left-back in those days – but he worked hard and there was something nice about seeing a Zanetti on either flank.

PES gamers swooned over the exploits of Juan Roman Riquelme at Villarreal but Juan Sebastian Veron was the superior playmaker.

Veron’s Premier League exploits had plenty believing he was a busted flush. But Konami knew better, gifting the Argentine with God-like ball skills and something called ‘tactical dribble’ a special ability that allowed him to hold off opposing players while waiting for the perfect pass.

The perfect pass usually took the form of a lofted through ball – the most glorious and also most difficult of assists with entire games often lost in a sea of terrible attempts.

The Nerazzurri’s answer to Gareth Barry, Cambiasso was pretty good at everything, without being very good at anything in particular.

That’s not a criticism. Every time needed a water carrier, as Didier Deschamps will happily attest. Cambiasso’s strength came in the fact he was a very efficient passer, making him the perfect conduit for a bit of tiki-taka style passing or even a spot of good old-fashioned time wasting.

The fact he could play pretty much anywhere in midfield also proved pretty useful whenever it came time to switch up formations or make a substitute. Just call him CamBARRYasso.

The unsung hero of the Inter frontline, Stankovic’s incredible career and contribution to the Nerazzurri often gets overlooked. PES fans knew better.

Leaving aside the childish giggles the Serbian’s name elicited among you and your 14-year-old mates back in the day, Stankovic was a top-class operator in the game and, crucially, capable of playing anywhere across the midfield.

That came in handy if you ever needed to add a little width to the team with Stankovic a half decent winger with a good engine who, like most Serbians on the game, had a rocket of a shot in his locker.

Dejan Stankovic from 40 yards!#OnThisDay in 2011 the Inter man scored this absolute stunner.pic.twitter.com/edeVdxkxy9

Adriano may have been the South American poster boy of Pro Evo and the first that springs to mind when recalling the great Inter Milan team of PES 5, but true connoisseurs knew Recoba was the real brains behind the operation.

In real-life, Recoba was the man who blew hot and cold for the black and blue. When he fancied it, the enigmatic Uruguayan had the ability to decide games singlehandedly with a sublime moment of invention. When he didn’t, his displays were similar to the kind witnessed on Sunday league pitches across the UK the morning after a particularly heavy night.

Fortunately, for PES fans, it was more the former than the latter, with Recoba a constant source of inspiration thanks to his wand of a left foot and free-kicks that had more swerve than Roberto Carlos on a balmy night in Lyon.

Top speed 99. The three sweetest words in the Pro Evo lexicon. Pace can get you a long way in football – just ask Michael Owen. Much like in real life, a speedy attacker in PES had the capacity to leave opposition defenders trembling in their wake – and Martins was the speediest of attackers.

The Nigerian was something akin to a locomotive train; ridiculously fast but often one who struggled with things like turning and stopping. It was commonplace in the game to get Martins on the ball and simply make a beeline for the opposition goal, never taking your finger off the spring button the entire time.

Sometimes it worked and you created the kind of glorious solo goal spectacular that might have once graced Football Italia. Other times you ran straight into a defender or the ball went out for a goal kick. Either way, you kept trying.

The man nicknamed ‘The Emperor’ by Inter fans never quite fulfilled in real-life but to PES fans he was quite simply the greatest striker the game ever produced and the architect of many a wondergoal.

A player so good, PES 5 is often remembered as ‘the Adriano one’. The Brazilian had it all; he was fast, strong and surprisingly agile.

Good in the air, but even better with the ball at his feet, Adriano’s 99 ‘shot power’ rating gave him, to quote Alan Partridge, “a foot like a traction engine,” while his 98 for ‘balance’ meant he could unleash hell from almost any angle.

Also adept at free-kicks, and both unnaturally strong and unnaturally good at dribbling, the Emperor ruled all the world of Pro Evo.

With his shaggy dog-looks and unpalatable opinions, Mihaljovic was unquestionably football’s answer to Mel Gibson, but this mean bastard took a mean free-kick and could fill in at centre-back or full-back, where he could put in a mean cross.

The Dutchman was touted as a star-in-the-making at Inter having arrived from a super-talented Ajax team spearheaded by Zlatan Ibrahimovic.

It didn’t quite work out and Van der Meyde soon found himself warming the bench for Everton. But he was a decent winger on PES 5 and a great attacking option, whatever David Moyes may think.

Cameroon’s answer to Paul Warhurst, Wome could play in defence, midfield and attack.

Not especially well in any of those positions, mind you, but it was still a useful option to have if the situation ever called for it. Which was never.

Morfeo was consistently touted as the next big talent in Italian football – quite often by people who discovered him rotting Inter’s reserves on PES.

He may have had the air of a pound shop Recoba, but Morfeo was a very skilful little player who proved useful from time to time.