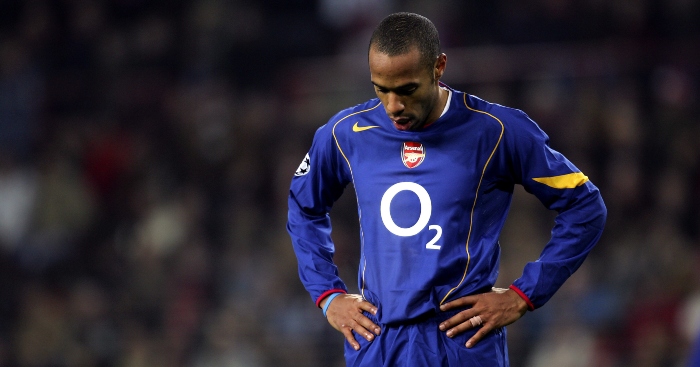 Thierry Henry scored a whole catalogue of incredible goals throughout his career, with so many of those coming during his time at Arsenal.

Goals that would have been iconic for so many players can somehow seem ordinary when scored by someone who is so consistently prolific.

There are so many Henry strikes worthy of being remembered that will largely be lost in the history books, as people, understandably, look back on his greatest strikes.

When people remember Henry’s time in red and white, their mind will probably go back to one certain goal that he scored, his sensational dink and volley against Manchester United.

01/10/2000 – In wake of his new job, Throwback to when Thierry Henry #ThierryHenry done this for @Arsenal against @ManUtd #gunners #ManUtd pic.twitter.com/hTejJKTTg7

When Henry spoke to Sky Sports about the moment, he said: “That was me, I always used to try stuff. People would call me cocky at times, call me arrogant, but I wanted it. I knew I could score goals. I used to do more difficult stuff than that in training to make sure I could do it in the game.”

There are obviously so many other goals that can get a mention, including the time he ran through pretty much the whole Spurs team before finishing.

However, we wanted to give a different goal its moment in the sun.

Arsenal had been knocked out of the Champions League in heartbreaking fashion during the 2003-04 campaign, as they were beaten 3-2 on aggregate by Chelsea, with Wayne Bridge scoring the winner in the 87th minute.

The Gunners were desperate to get off to a good start the following campaign, but things didn’t quite go to plan.

Having opened their account with a 1-0 win over PSV Eindhoven, a draw against Rosenborg and two more draws against Panathinaikos had followed.

This made it vital that they didn’t lose in their return match against PSV, but Arsene Wenger’s side had found themselves 1-0 down after just eight minutes following a header from right-back Andre Ooijer.

As had happened so often when they were in trouble, Arsenal looked towards their hero for inspiration, and he certainly didn’t disappoint.

After skipping past a bewildered defender, he plays a brilliant one-two with Freddie Ljungberg, collecting the Swede’s back-heel and firing past the goalkeeper in one swift movement.

This was actually the third consecutive Champions League game the France international had scored in and the Gunners eventually advanced to the next round.

However, it was to be a story of frustration for him and his teammates once again in the knockout stages, as Arsenal were beaten 3-2 on aggregate by Bayern Munich in the first knockout round, despite Henry scoring the only goal of the return leg.

Perhaps the goal against PSV isn’t spoken about because Arsenal only drew this match, while their Champions League campaign was not exactly one of the club’s best.

But the audacity to pull off that unorthodox skill, awareness to play the one-two with Freddie Ljungberg and the quality to finish the move off deserves plenty of recognition.