An ode to Tim Sherwood, his gilet and his short-lived managerial career

To sum him up purely by an item of clothing would possibly be unfair to someone who, along with being a Premier League-winning captain and England international as a player, brought his own brand of personality to touchlines and press conferences up and down the country. But it’s funny, innit?

As a player, Sherwood won the Premier League at Blackburn and also had spells at Watford, Norwich, Tottenham, Portsmouth and Coventry. Upon retiring, he spent six years back at Spurs, first as an assistant under Harry Redknapp and then as a technical director.

His first taste of Premier League management came after the sacking of Andre Villas-Boas as Tottenham head coach in 2013, with the north London side seventh after 13 games. He was originally brought in as an interim boss but was swiftly handed the job on a full-time basis until the end of the 2013-14 season.

He decided to go with a 4-4-2 and, in doing so, metaphorically stuck two fingers up at his predecessor Villas-Boas who had spent the previous few months attempting to get Spurs to effortlessly interchange between different variations of 4-2-3-1, play a high line, and attack with fluidity and energy.

It seemed to be working as his Spurs side went unbeaten during Sherwood’s first six league games and, thanks to – or, depending on which way you look at it, in spite of – a strike partnership of Emmanuel Adebayor and Roberto Soldado, found themselves just one point off the top four.

Tottenham fans were beginning to get excited again, with the club even starting to sell gilets in the club shop.

If you bought one, you fully deserve what happened next. 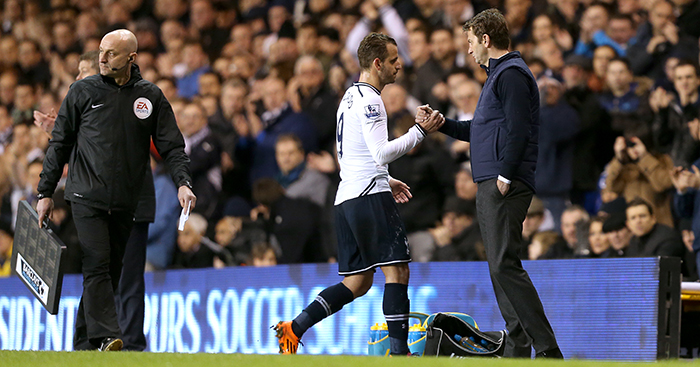 Heavy defeats at the hands of Manchester City and Liverpool, along with a 1-0 loss to local rivals Arsenal, soon put an end to that optimism, with Sherwood beginning to become frustrated just two months into the job.

Spurs were beaten 4-0 by Chelsea in March and, in an interview with the Daily Mail in 2015, Sherwood admitted to telling Jose Mourinho’s assistant manager Steve Holland to “f*ck off”, calling him a “patronising c*nt” after Holland came to commiserate him on the defeat.

Tottenham finished the season in sixth and, despite still having a year left on his contract, Daniel Levy decided to let Sherwood go at the end of the season. There were reports that he had fallen out with a number of senior players and often failed to accept responsibility for poor performances.

In what turned out to be his final game of charge in May 2014, Sherwood got a fan out of the front row of the crowd, threw his gilet at him and asked him to sit in the dugout. “That guy’s an expert, seriously,” Sherwood said afterwards. “Every week he tells me what to do. So I gave him the opportunity to do the job.”

For all his faults, Sherwood can take credit for giving Harry Kane his Premier League debut as Spurs smashed a sorry Sunderland side 5-1 towards the end of the season.

This, along with the fact that he has the best win ratio of any Tottenham manager in the Premier League era, is something that he very rarely mentions…

‘Ain’t never felt this bad ever’

Come February 2015, Aston Villa were in the relegation zone and had failed to win in 10 games before Sherwood’s appointment. They were the lowest scorers in the division and turned to Sherwood as they attempted to avoid their first ever relegation from the Premier League.

Speaking at the time, Aston Villa chief executive Tom Fox said: “We strongly believe Tim has the qualities to get the best out of our current squad and help us build and develop for the future.”

And he did. Sherwood turned it around, saving Villa from the drop. Alongside avoiding relegation and getting them to an FA Cup final (which they lost 4-0 to Arsenal), he’ll be remembered for recording a last-gasp 2-1 win over local rivals West Brom, which prompted his famous ‘pulse check’ celebration in front of the Holte End.

He was sacked in October 2015 with the club in the relegation zone after a defeat to Swansea. In one of his last games as manager, Sherwood, seemingly close to tears, said he “ain’t never felt this bad ever” after his Villa side bottled a 2-0 lead and lost 3-2 to eventual Premier League champions Leicester.

“I ain’t never felt this bad ever” – Tim Sherwood after Villa surrendered a 2-0 lead to lose 3-2 at Leicester still brings me to tears. pic.twitter.com/N3xEnIvaay

Sherwood’s most recent role was as Swindon’s director of football in November 2016. He was appointed by his former Norwich roommate and good friend Lee Power and in his first press conference said that he would have the final say on transfers, tactics and picking the team. But, just to be clear, he definitely wasn’t the manager.

His team won just seven matches out of 32 during his tenure. For two of those victories he wasn’t even in attendance due to a stadium ban for calling the referee a f*cking mug three times. He left after they were relegated, saying: “It wasn’t a job for me. I helped him (Power) out. I wasn’t getting paid to do it.”

So, what next for Sherwood? In 2017, he said he was “interested in any job”, but after a few years without a coaching role and now regularly working as a pundit with Al-Jazeera and Amazon Prime, it looks like that ship has sailed. Or sunk, depending on how you look at it.

If Sherwood doesn’t return to the Premier League, he will be remembered for his bad language and good humour, and for always wearing his heart on his sleeve on the touchline. Well, he would’ve done if it wasn’t for that damned gilet.