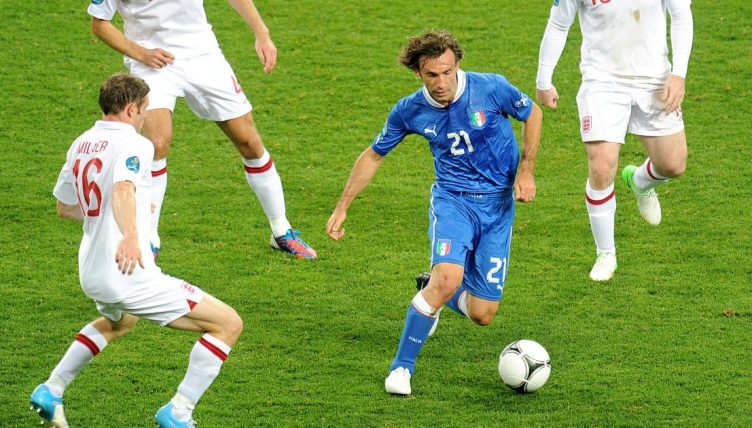 Logically, us football fans don’t enjoy watching an opposition player tear our team apart. We’ll probably even hurl abuse at them if they do. Sometimes, however, the only thing to do is sit back, awestruck, and enjoy the show.

When Italy faced off against England at Euro 2012, Andrea Pirlo’s performance left Three Lions supporters with little choice than to do just that. And what’s more, he did the exact same thing against the exact same team again two years later.

Roy Hodgson and Joe Hart probably still have nightmares about those showings, but as far as we’re concerned, they should just be grateful they got to see them take place.

Most player montages on YouTube feature loud, fast techno music that you’d hear in a Berlin nightclub. If you search ‘Pirlo Euro 2012’, however, the top video has smooth jazz playing in the background. That says it all.

In 2012, Pirlo was entering one of the best spells of his career, despite being 33. After leaving AC Milan on a free transfer the previous year, he was snapped up by Juventus and enjoyed an excellent debut season in Turin, recording 14 assists and being named in the Serie A Team of the Season.

He carried this form into Euro 2012. Italy’s first game was against Spain, who had one of the most formidable midfields ever, yet Pirlo was still the stand-out player, claiming a beauty of an assist.

He was Man of the Match again against Croatia, scoring a vintage free-kick, before getting another assist against the Republic of Ireland in the final group game. His next victims? England.

Assisted by some half-hearted pressing and marking from Danny Welbeck and Wayne Rooney, the Italian immediately began to run the show. We don’t have the stats, but we wouldn’t be surprised if he touched the ball more in that one game than the entire England team combined in the opening stages.

He could’ve quite easily added another assist to his name after 25 minutes. Receiving the ball inside his own box, he strolled forward before lofting the perfect ball over the top for Mario Balotelli, who couldn’t convert.

Just before half-time, he once again sliced the English defence open. With the ball at his feet a fair bit outside the opposition penalty area, he spotted a pass most wouldn’t see on a TV screen. He, obviously, executed it to perfection, putting it on the head of Antonio Cassano who squared it to Balotelli. The Man City man again fluffed his lines.

This would become the story of the match. Pirlo would open England up with a ridiculously good ball, and his mere mortal team-mates would fail to finish up.

After 90 minutes, you’d think Hodgson and co might have figured out a way to stop him. Given his age, you’d also think he and his influence on the game would begin to wane. Nope and nope.

Nevertheless, after another half an hour of Pirlo domination, the game was still goalless, and so it went to penalties. But, as we all sadly remember, even from 12 yards, he was a class above the rest.

As Pirlo walked from the halfway line to the penalty spot, a walk so many find so terrifying, he was coolness personified, looking more like he was taking a leisurely Sunday stroll. Joe Hart, meanwhile, was like a rabid dog in goal, jumping around and making all sorts of faces, hoping to put Pirlo off. Ha.

Knowing that, with all that energy, Hart was bound to dive one way or the other, the Italian dinked the ball straight down the middle and into the back of the net. Such was its beauty that we’d have zero complaints if the panenka was renamed the Pirlo afterwards.

He was unsurprisingly named Man of the Match. He completed more passes than the entire England midfield combined, covered more distance than any of their players, created countless chances and topped things off with the perfect penalty.

He went on to take Italy to the final and be named in the Team of the Tournament. If his nation had won the whole thing, there’s little doubt that he’d have claimed the title of Best Player.

England, meanwhile, headed home with their tails between their legs, hoping to God they’d never have to face him again. Yeah, about that…

We’d pay good money to see Hart’s face when the two countries were drawn into the same group for the 2014 World Cup.

Still, it was two years on, Pirlo was two years older and this time England knew exactly what to expect. Surely they wouldn’t be outplayed by him again.

Unfortunately, though Italy weren’t the side they had been in 2012, Pirlo was still every bit as good. At the end of the 2013-14 season, he’d been crowned Serie A Player of the Year and was also named in the Serie A and Europa League Teams of the Season.

His immunity to the cruel rigours of time became apparent as soon as the match started. The only difference between this man and the one that dazzled in Kiev two years earlier was the perfect beard covering his face. The movement, the technique, the sheer grace – they were all still there.

Watching the opening stages, the term ‘Groundhog Day’ comes to mind. Pirlo was seeing more of the ball than anyone and dictating the tempo of the game. Then, 34 minutes in, he showed he didn’t even need to touch the ball to cause problems.

With the ball rolling towards him outside the area from a corner kick, most expected him to try and curl it in. Daniel Sturridge certainly did and therefore followed him, leaving Claudio Marchisio free. Aware of this, Pirlo let it run through his legs and to his Juventus team-mate, who thus gave Italy the lead.

When Italy so nearly retook the lead on the stroke of half-time, Pirlo was of course responsible. Spotting the run of Balotelli, he played the striker in with a perfectly weighted ball, but Phil Jagielka saved the day with a goal-line clearance.

Perhaps it was the heat, perhaps his age was finally catching up with him, or perhaps he couldn’t be bothered, but his influence did begin to decrease in the second half. Nevertheless, this was to be his last game against England, and he made sure he went out in style.

When Italy, leading 2-1 received a free-kick a good 40 yards out in the 93rd minute, most expected them to play it short and keep possession. That’s what most normal players would do. Pirlo, though, is far from normal.

He stepped up, put a spin on the ball that Roberto Carlos would be proud off and sent it crashing onto the crossbar. We’re not exaggerating when we say that, had it gone in, it would’ve been up there with the best free-kicks ever. Hell, it still is.

We’re also only half-joking when we say that we wouldn’t be surprised if he hit the bar on purpose, feeling that he’d caused poor old Hart enough embarrassment two years earlier. After the full-time whistle, the England keeper was caught on camera shaking Pirlo’s hand and saying “Wow. F*cking hell”. F*cking hell indeed, Joe.

When Pirlo announced his retirement from football in 2017, English football fans breathed a collective sigh of relief as they knew they’d never face him again.

That being said, somewhere alongside the relief may be a tinge of disappointment. When the football’s that good, it’s hard not to miss. Even if it’s at your own expense.

14 of the best and worst Panenkas ever: Zidane, Pirlo, Ramos, Crouch…